Grief Behind Bars: Prisoners on Nipsey Hussle and the Cycles of Violence 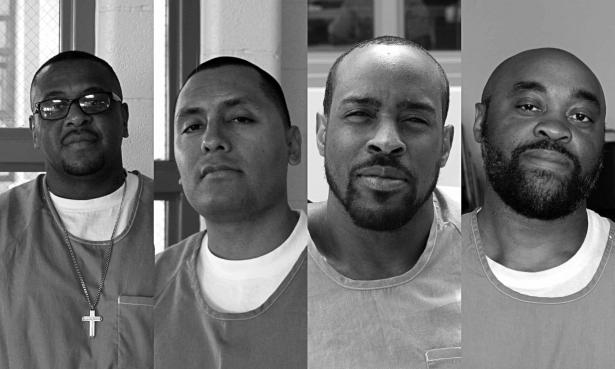 Inside the prison waiting room, we were greeted with a threat.

An official at Lancaster, the California state prison in a desert town outside of Los Angeles, was dictating the strict dress code and warned us that anyone who was “being difficult” would not get in. We had already witnessed her turn away one family that came to visit a loved one, refusing to provide them an explanation for why they weren’t allowed in, but telling them they were “disapproved” from entering.

While waiting to enter the facility two weeks ago, I met Trino Jimenez. He told me about his brother’s murder. For three decades, he never cried about the death, he said. Now, at age 51, he said he was trying to find ways to heal. That includes going behind bars, meeting the man who killed Julio, and advocating that he be released from prison.

“I don’t want to live in anger,” Jimenez said. “I want him to be released of his guilt.”

Jimenez came with Re:store Justice, a group that works with homicide victims’ families – and brings them to prisons to talk with and supportpeople incarcerated for murder. In a country that punishes violence by indefinitely locking people up, these victims try to think differently about justice. They recognize that imprisonment does little to address harm and believe that when prisoners meet with victims and survivors, there is meaningful accountability and the potential for healing and recovery for both sides.

After about an hour, when it was our turn to be processed, the officers forced the women in the group – including mothers who had lost their sons – to remove the underwire from their bras. Security protocol, they said. Finally, we made it past the metal detectors and barbed-wire fences, and the humiliation and anxiety of the ordeal dissipated as two dozen men in blue prison uniforms greeted us with smiles and hugs.

Everyone was bonded in death: the prisoners, too, had lost loved ones to violence. They sat in small circles, celebrating their loved ones, talking about the people they’ve hurt and reflecting on the pain of life sentences. As guards stood watch, they discussed grief, cycles of trauma and the recent unexpected killing of Nipsey Hussle, the LA rapper and activist who worked to curb gang violence.

Here are some of their words on surviving violence and tragedy – and surviving prison.

James Bivens, 42, on the death of Nipsey Hussle 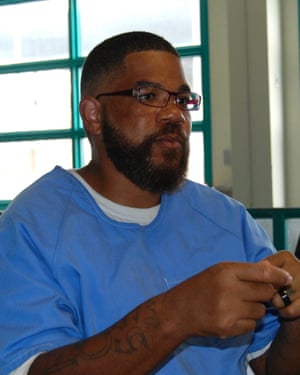 “We come from a place where it wasn’t possible to hope or dream about anything,” said James Bivens, who grew up in Los Angeles and has been imprisoned since age 16.

But recently, rival gang members in LA and inside prisons appeared to have united around Hussle’s death and discussed whether the tragedy could lead to a long-term “ceasefire”, an end to pointless killings. “I’ve not seen anything like this in my 42 years of living,” Bivens said. “We’ve been fighting each other forever. Let’s try a different path.”

The criminal justice system hasn’t worked in California, he continued. “I don’t think prison has done anything to help gang violence. It falls right in line with what’s on the street … It is their means of controlling us.”

Later, Bivens said he felt changed by the rare opportunity to meet with people from the outside. “It’s the first time since I’ve been incarcerated where I wasn’t an ‘offender’,” he told me. “I wasn’t somebody who participated in murdering someone … The impact is we feel normal.”

Lanaisha Edwards, on losing two brothers to murder and others to prison

“I’m tired of the obituaries,” Lanaisha Edwards told the group of men inside. Edwards, an LA community organizer, works with Re:store Justice knowing the pain of violence well – she lost two brothers. She also knows the failures of the prison system. She grew up visiting her father behind bars, and he remains incarcerated today.

“We need a lot of you to come home, to have a stake in our own community. For us to survive, it’s going to take us. No one cares about us … We are going to save us.”

She told me she was both inspired and distressed by the visit. “They were feeling the spirit of Nipsey Hussle, and this new vibe going over LA … They are trying to get a peace movement in prison.”

But the prison staff’s treatment of the visitors, including interrupting their goodbyes and abruptly forcing them to leave before the session was scheduled to end, was upsetting: “Why would we ever have a system that would make people feel inhuman? That is not the point of rehabilitation … Our experience going in was so horrible. I can only imagine how they treat them in there. They don’t feel human.”

Josiah Smith, 33, on growing up in a system that killed his friend 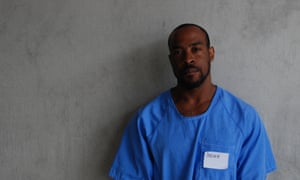 Josiah Smith has been incarcerated for 15 years. Under a new law that’s supposed to give people sentenced as juveniles a second chance, he hopes he will eventually get a parole date. Photograph: Sam Levin/The Guardian

“We used to do everything together, but we both lost our ways in gangs”, Josiah Smith told his group, recounting early memories of playing with his best friend in the sandbox. Smith, who grew up in LA and Oakland, saw his friend again in juvenile hall. They’d talk about what they would do when they would get out.

But his friend never made it out. He died by suicide in a youth prison. “I couldn’t believe it. It really hurt when I lost him … For a long time, I wouldn’t talk about these things, the pain and hurt, I would bottle it up … and lash out in violent ways,” Smith said.

The 33-year-old has been incarcerated for 15 years and, under a new law that’s supposed to give people sentenced as juveniles a second chance, he hopes he’ll eventually get a parole date. But he doesn’t know when that will happen: “For a long time, I thought I was going to die in here … But I’m ready to get out and better myself and live my life … I want to share my story with some youth. Hopefully, they can see a person who has been successful.”

Edwin Cruz, 29, on getting a life sentence as a teenager 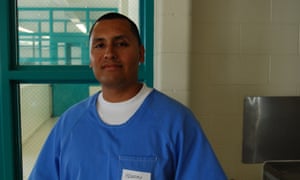 Edwin Cruz, 29, has been imprisoned for 12 years and was sentenced to life without parole as an adolescent. Photograph: Sam Levin/The Guardian

“Society threw us away,” said Cruz, a 29-year-old who has been imprisoned for 12 years and was sentenced to life without parole as an adolescent. “We’re so caught up on punishment instead of rehabilitation. I did something harmful, but I can change.”

Meeting with families from the outside brings mixed emotions, he said: “I feel honored and humble … but also a sense of unworthiness. Who am I to sit amongst these family members who lost loved ones? For them to tell me they are rooting for me to come home, for them to come in and hug us and smile and laugh … I feel shame. That could’ve been my victim’s mother. It’s emotional.

“We’re all survivors,” he added. “Being able to connect with society again, to feel their pain and sadness, it makes me feel. It helps me understand the damage I’ve caused and reconnect with humanity.”

Nora Agredano, on why she visits prisons after losing her son 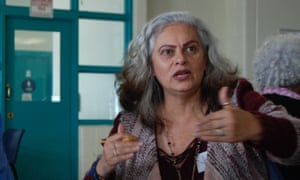 “This is the last thing I would ever have known to do,” Agredano told the men in her group, after recounting her son’s smile, humor and charisma, before he was killed at age 17. “But now I do it whenever I can. I can give you a glimpse of what I go through, and you give me a glimpse of what you go through on a daily basis. And it makes us human.

“I take off my mask in here,” she continued. “It’s time for you to be yourself. Be who you are … You have to take the leap in order to grow.”

She added: “From a mother’s point of view, it breaks my heart to see you here. You just got dished a raw deal.”

James Matthews, a 39-year-old prisoner, said his conversations with Agredano helped him think differently about how to take responsibility for hurt he has caused – and gave him a brief chance to feel vulnerable inside prison.

“This is breaking the cycle,” he told his group. “Her son’s story is changing lives, even if he’s not here.”

Darryl Burnside, 34, on surviving gun violence and ending up in prison 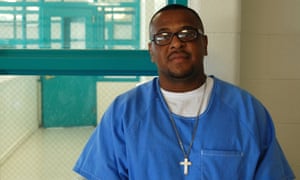 Darryl Burnside: ‘This is rare, very rare … To connect with people, to hear a family, it teaches remorse and compassion and empathy.’ Photograph: Sam Levin

“I’m not used to opening myself up to strangers,” said Burnside, who has been incarcerated for 17 years, since he was a teenager. Burnside said he rarely gets the chance to talk about losing his brother at age 12 – and then being shot twice at age 13.

“This is rare, very rare … To connect with people, to hear a family, it teaches remorse and compassion and empathy. It’s healing connecting with people.”

“We’re no longer victims. We’re survivors,” he said, adding that the meeting changed the way he would think about the person who shot him: “I’d be able to forgive him.”

Ernesto Cisneros, 36, on living with guilt 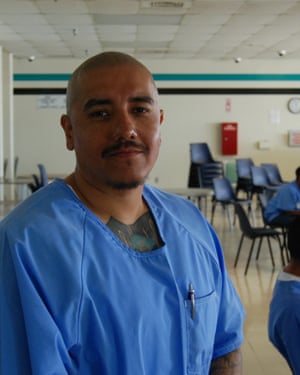 “He was killed right in front of my eyes,” said Ernesto Cisneros, a prisoner of 12 years, of the day his friend was murdered at a party: “His family is mad I took him to this party. They had a lot of anger against me. All these years, they still hold that anger. I don’t really like to talk about it. But I always think about him.

“I want to share his story,” Cisneros continued, adding that he’s finally trying to speak up: “For a lot of years, I was stuck in my cell.”

Kervin Bailey, a prisoner of 18 years, added that there were so few opportunities behind bars to confront loss.

“I never talk about my dad,” said Bailey, 38, whose father was murdered. “Being in here so long, you shut yourself off … I’m still struggling.”

Trino Jimenez, on fighting for the release of his brother’s killer

“My hope is he and I share a seat together,” said Trino Jimenez, who I met in line earlier that day. Jimenez’s life fundamentally changed in 2015, when he started communicating with the man who killed his brother 33 years ago. “I got to see the whole story, not that it justifies the crime, but it paints a picture of what led to the crime.

“The God I serve requires me to forgive,” Jimenez added. “As I learn his history, it seemed like nobody really reached out to him … Healing was never offered to him.”

Jimenez met with the man and eventually advocated for his release at his parole hearing. The board denied it – and the man remains incarcerated today. “I’m anxious for [him to be released]. I look forward to that day … I feel like him and I could do a lot of good in this world, if we’re out together.”

Sam Levin is a reporter for Guardian US, based in San Francisco. Click here for Sam's public key. Twitter @SamTLevin