“These encouraging results suggest that not only are children increasingly engaged in advocating for their future, they are also effective advocates to their parents,” says climate scientist Katharine Hayhoe 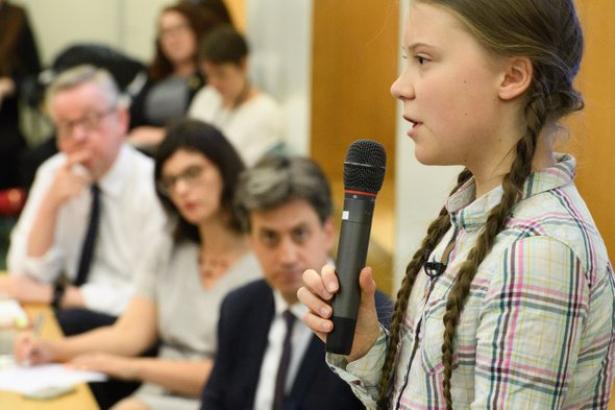 Swedish teenager Greta Thunberg became famous this spring for launching a student movement to compel adults to take action on climate change. Instead of going to school, Greta has been spending her Fridays in front of the Swedish parliament with a sign reading: “School Strike for Climate.” Students in more than 70 countries have since followed her lead. But before she started trying to convince the world to take action, Thunberg worked on her parents. She showered them with facts and showed them documentaries. “After a while, they started listening to what I actually said,” Thunberg told the Guardiannewspaper. “That’s when I realized I could make a difference.”

Thunberg is not alone. Other young people can be equally convincing, according to a paper published May 6 in Nature Climate Change. The team of social scientists and ecologists from North Carolina State University who authored the report found that children can increase their parents’ level of concern about climate change because, unlike adults, their views on the issue do not generally reflect any entrenched political ideology. Parents also really do care what their children think, even on socially charged issues like climate change or sexual orientation.

Postulating that pupils might be ideal influencers, the researchers decided to test how 10-to-14–year-olds’ exposure to climate change coursework might affect, not only the youngsters’ views, but those of their parents. The proposed pass-through effect turned out to be true: teaching a child about the warming climate often raised concerns among parents about the issue. Fathers and conservative parents showed the biggest change in attitudes, and daughters were more effective than sons in shifting their parents’ views. The results suggest that conversations between generations may be an effective starting point in combating the effects of a warming environment. “This model of intergenerational learning provides a dual benefit,” says graduate student Danielle Lawson, the paper’s lead author. “[It prepares] kids for the future since they’re going to deal with the brunt of climate change’s impact. And it empowers them to help make a difference on the issue now by providing them a structure to have conversations with older generations to bring us together to work on climate change.”

Scientists in the field find the study heartening. “These encouraging results suggest that not only are children increasingly engaged in advocating for their future, they are also effective advocates to their parents,” says climate scientist Katharine Hayhoe of Texas Tech University. She was not involved in the research but works to bridge the gap between scientists and stakeholders on the issue. “As a woman myself and someone who frequently engages with conservative Christian communities,” she says, “I love that it’s the daughters who were found to be most effective at changing their hard-nosed dads’ minds.”

The intergenerational model is “a promising avenue for those of us in climate change education,” says Nicole Holthuis, a researcher in science education at Stanford University, who was not a researcher on the study. Too often, Holthuis says, scientists and educators believe that delivering the facts of global warming will be enough to change minds. “With this study,” she says, “they’re addressing a critical need to acknowledge that the sociopolitical aspects of climate change make it very difficult for people to take [the facts] in. Maybe we can leverage these intergenerational relationships in ways that can be very productive.” As a next step, Holthuis would like to see if increasing levels of concern from this curriculum translate into actual changes in behavior. Child-focused lessons on a similar issue did alter parents’ actions. A 2016 study of Girl Scout troops found that an educational program on energy consumption resulted in reduced energy use by their families.

In the North Carolina study, the curriculum consisted of four classroom activities and a field-based service-learning project. Of 238 families in that study, 92 served as controls; those children’s teachers did not use the new curriculum. Parents were invited to view outdoor projects and were interviewed by their children. Instead of addressing climate change directly, children asked adults about local changes they might have noticed. Parents, says Lawson, responded to a series of questions from their children: “How have you seen the weather change? Have you ever seen the sea-level rise? We wanted to take climate change out of it just to make it more ideologically neutral.” At the beginning and end of the study, parents were surveyed on demographic characteristics such as age and political ideology as well as their views on climate change.

Concern about the issue was measured on a 17-point scale from least concerned (–8) to most concerned (+8).  Over two years, levels of concern increased among all parents, including those in the control group. But those who engaged in the curriculum with their children showed larger increases and parents who identified as male or conservative more than doubled their level of concern about climate change from relatively unconcerned (–2) to relatively concerned (+2).

Lawson believes that conversations about climate change were easier because of the level of trust between parents and their children. “That doesn’t necessarily exist between two adults talking to each other,” she says. The authors do not know why girls were more effective than boys but suggest that girls may have been more concerned to begin with or are better communicators in this age group than boys. While this paper doesn’t measure behavioral change, it does provide hope, says Lawson, “that if we can promote this community-building and conversation-building on climate change, we can come together and work together on a solution.”

Lydia Denworth is a Brooklyn-based science writer and author of I Can Hear You Whisper: An Intimate Journey through the Science of Sound and Language (Dutton, 2014). She is working on a book about the science of friendship.