The effort aims to send a message that the party is in danger of eroding a critical base if it continues to back the Green New Deal resolution being pushed in Washington, D.C. by Rep. Alexandria Ocasio-Cortez (D-N.Y.) and her allies. 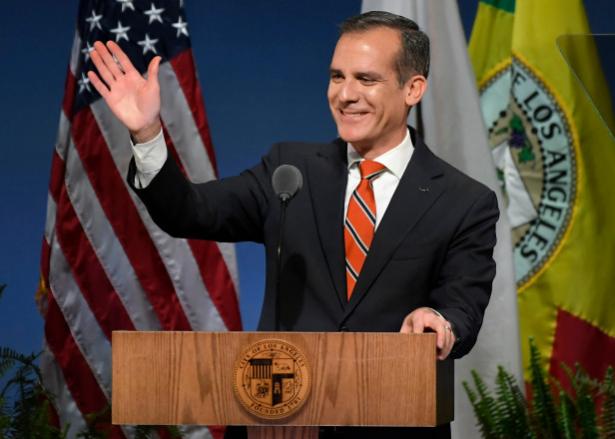 When Los Angeles Mayor Eric Garcetti launched his "Green New Deal LA" plan last month amid cheers from environmentalists, hundreds of jeans-wearing, tattooed union members outside the event chanted “Garcetti’s gotta go” and denounced the move as a betrayal. The Garcetti protest was followed by disputes in the state capital this month over a large buffer zone that would block new oil and gas wells, as well as a massive hydro project near Joshua Tree.

Robbie Hunter, president of the state Building and Construction Trades Council — which represents more than 400,000 workers — says that dozens of his members plan a major “Blue Collar Revolution” demonstration Saturday morning at the California Democratic Party convention in San Francisco, which will be attended by 14 of the Democratic presidential contenders and 5,000 delegates and guests.

The effort aims to send a message that the party is in danger of eroding a critical base if it continues to back the Green New Deal resolution being pushed in Washington, D.C. by Rep. Alexandria Ocasio-Cortez (D-N.Y.) and her allies. Hunter argues the measure's goals could endanger thousands of jobs in the Southern California oil industry alone.

“All it does is do what the Democratic Party seems to be very good at lately — which is export our jobs, while doing nothing for the end game, which is the environmental,’’ Hunter said.

And California labor forces this weekend are also expected to also put their clout behind Rusty Hicks, who heads the Los Angeles Labor Federation — a candidate in a contentious race to chair the California Democratic Party. Hicks has signaled labor’s concerns by signing a letter opposing a move to ban a hazardous acid from refineries, saying it "will lead to the loss of tens of thousands of jobs for local people and cost our region millions of dollars in activity. We cannot dismiss these jobs or look at the women and as expendable: because they are not.”

“The Green New Deal may be the darling of the Democratic Party — but it really divides the Democrats on a fault line, which is more of the elites against the working class Democrats who are concerned about losing their jobs," said Jessica Levinson, a member of the Los Angeles Ethics Commission and a professor who teaches politics and ethics at Loyola Law School.

ifelong union members “don’t necessarily want to be retrained’’ for other, greener work spots — “nor is it even possible,’’ says Levinson. She predicts with the 2020 election looming, Democratic leaders will have to wrestle with the fact that “unlike the Mueller report and impeachment and indictment — people vote on whether or not they’re going to lose their job.”

While there's no chance that President Donald Trump will take California, pushing too far on the Green New Deal could "make it difficult for Democrats to recapture crucial Western states” like Colorado and Nevada — both won by Hillary Clinton in 2016 — “and it would certainly be an issue in states like Pennsylvania," said Jack Pitney, a veteran California political analyst and political science professor at Claremont McKenna College.

He says there’s a “cautionary tale” for Democrats, who should remember that “West Virginia, until 2000, was considered solidly blue." Republican strategist Karl Rove, working for candidate George W. Bush, pushed the fact “that the Democratic nominee was Al Gore, author of 'Earth in the Balance,’'’ a fact that didn’t sit well with coal miners, Pitney recalls.

“So yes, this is a real hazard for Democrats, something that somebody from a state with extractive industries may want to recognize,’’ he said.

In Los Angeles, Garcetti's plan establishes a wide range of environmental goals, including an 80 percent renewable energy supply by 2036 and making every building emissions-free by 2050.

Unions argue that Garcetti hasn't considered his plan's effect on jobs. They say reducing in-state petroleum production and refining will simply shift Los Angeles to imported supplies, while forcing workers too old for retraining into retirement.

“[Garcetti's] got the big corporations with him, and he’s not thinking of the effects on the common people,’’ said Paul Valdez, 58, a third-generation building trades worker from Thousand Oaks. “If they start taking away our jobs, who’s going to pay our bills?”

Brian D’Arcy, business manager of the powerhouse International Brotherhood of Electrical Workers in Los Angeles, says that Garcetti’s move is just the latest on the environmental front that’s pushing his members toward the GOP — and into the arms of Trump, who effectively wooed blue-collar Rust Belt workers on his way to a 2016 presidential win.

“I’m getting hate mail and blowback from our workers, saying the Democratic Party is doing nothing for us,’’ D’Arcy says, sitting surrounded by his union members in a hall in Los Angeles as they prepared to protest on the streets. Asked if members might gravitate toward Trump, D’Arcy sighed and said, “It’s already happening.”

He said he has heard from scores of members who are so angered about the issue they are considering sitting out the election — or even casting a ballot for Trump.

While most political observers say the state is unlikely to shift red, Garcetti told POLITICO he is keenly aware of the concerns. “I never dismiss people’s fears — I think they come from a real place and a word of warning,’’ he said. But, he insisted, “I have deep confidence that those fears are not only unfounded, but it’s the opposite ... there is so much to gain.”

Though he's offered few specifics on some 400,000 new jobs he says would result from shifting to carbon-free technologies, Garcetti says his goal is to “take the skills that [workers] have and to be able to bring them into greener, more renewable jobs.”

That will mean balancing the concerns of labor with the environmental and health concerns of millions of Angelenos who live in the shadow of oil derricks that have been a fixture since the city's founding — and may be spewing pollution, he says.

At the state Capitol, unions helped defeat a bill that would have curbed oil production by establishing a 2,500-foot buffer zone around new oil and gas wells that aren't on federal land. The setback would have applied to homes, schools, hospitals and playgrounds, going further than local ordinances like Kern County's 210-foot buffer and Los Angeles County's 300-foot requirement.

The bill was “an overreach’’ that would have had a dramatic impact on jobs, said Scott Wetch, a lobbyist whose firm represents the International Brotherhood of Electrical Workers, Utility Workers Union of America and State Pipe Trades Council, among other unions. "We have to respond accordingly."

In another high-profile instance, construction and electrical workers supported CA SB772 (19R), which would have opened the door for a large hydropower project near Joshua Tree National Park pursued by NextEra. But the bill died this week amid sharp opposition from environmentalists, consumer advocates and clean energy suppliers.

Wetch says it's a false notion that labor works against environmental goals. He pointed out that unions backed several landmark bills that steadily increased the state's Renewables Portfolio Standard. And they took a potentially decisive stance this year against CA SB386 (19R), which would have allowed some irrigation districts to count power from their hydroelectric dams, which currently is prohibited and opposed by environmentalists. The bill died this week in the Senate.

"We have environmental credentials that I'll defend anytime," he said. "But when it no longer becomes a discussion of smart public policy and how you get to your stated goals but just one politician after another trying to outpander one another to claim they're greener than the next guy, that's when you run into extreme problems."

He charged that Garcetti is bowing solely to environmental interests by announcing "we're going to shut down all five of the gas-fired power plants in the L.A. basin without a legitimate plan.”

"Talk about the most pandering piece of political activism that I've ever seen," Wetch said. "The mayor should be ashamed of himself."

Union leaders and members say they’re also deeply concerned that other aspects of the Green New Deal may impact their members’ bottom line, such as congestion pricing for tolls on freeways during rush hour and higher gas taxes.

Environmentalists point to cooperation with labor in some areas, like electric vehicles, where the jobs argument is less potent. Dan Jacobson of Environment California said the frame used to be about the environment versus the economy, as with logging: "You were going to cut down the tree or you were going to save a lumberjack's job. That was horrible compared to what it is now."

He said he believes unions are getting greener in some areas, but remain in a dispute over oil-related jobs.

"If you looked at the people who work with EVs, they'd go, we're hand in glove with the unions.' If you work with people who are 'keep it in the ground,' it's more antagonistic."

Muratsuchi, whose Los Angeles County district includes a refinery owned by PBF Energy (which also employs Wetch's firm), also argues that it's not a zero-sum debate. But he acknowledges the tensions.

"I'm not trying to shut down this industry," he said at last month's committee hearing on his bill. "I've never talked about shutting down this industry and I have a strong record of supporting good union jobs. But the development of oil and gas should not come at the expense of our most vulnerable populations."

Sierra Club California director Kathryn Phillips said that both Garcetti and Green New Deal backers like her organization are “all about just transitions” that will be fair to both labor and the environment. She said that environmentalists and union members agree on the goals but have different ideas on how to reach them.

“The sadness here is that if you talked to a lot of workers individually ... they know that we have got to get off of oil," she said. "Everyone knows that. But it’s the pain of getting there.’’