Expertise in the language of the internet is part of what has made BuzzFeed a digital giant. Now members of the website’s news staff are using their fluency in digital culture to pressure their employer to come to the bargaining table. 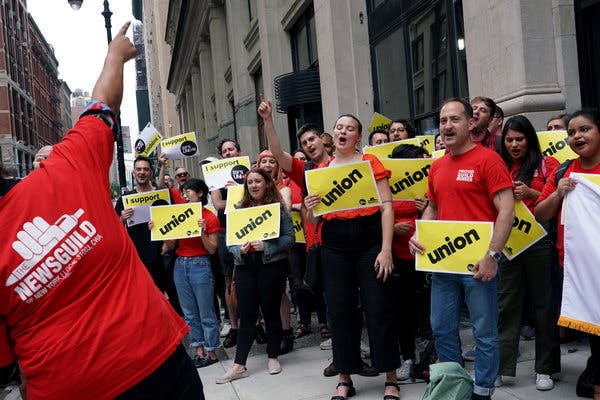 Expertise in the language of the internet is part of what has made BuzzFeed a digital giant. Now members of the website's news staff are using their fluency in digital culture to pressure their employer to come to the bargaining table.

The BuzzFeed News Union, which came to life four months ago when the staff decided to join the national News Guild, invoked an online trope in the bio of its Twitter account: “Building a stronger newsroom while staying nimble — get you a union who can do both.” The line is a play on the “get you a man who can do both” meme, which BuzzFeed explained in a 2016 piece.

Last week, the account posted a “sign bunny” — a pictogram of a sign-holding rabbit, made from computer symbols — to note that the company had yet to recognize the union.

The tools of protest at a rally outside its Manhattan headquarters were decidedly old school: signs, T-shirts, chants, a bullhorn for speeches and an inflated rat to signify a nonunion workplace. A Tex-Mex restaurant down the block sent pounds of chips and salsa in solidarity.

“If BuzzFeed is committed to having a news division, they need to keep up the industry labor standards that people fought for for decades,” said Dominic Holden, a political reporter who serves on BuzzFeed’s union organizing committee.

There has been a wave of unionization at online publications, getting its start at Gawker in 2015. Outlets that have followed Gawker’s lead include the original online magazines Slate and Salon; destination sites like Vice Media, HuffPost, Refinery29, The Dodo and Vox; the humor site The Onion; the podcasting company Gimlet Media; the music site Pitchfork; and New York Magazine’s online verticals The Cut, Vulture and Intelligencer.

In joining with unions, reporters and editors at online publications are following in the footsteps of their print predecessors. Now that digital media has matured, digital journalists have dropped the we’re-just-happy-to-be-published attitude that once sustained them.

“People want a career,” said Hamilton Nolan, a staff writer at the website Splinter, who helped lead the Gawker union drive. “They don’t just want to jump every couple years from job to job.”

The ranks have swelled recently at two unions representing writers and editors: the News Guild, which represents the staff at The New York Times, among other media organizations, and the Writers Guild of America East, perhaps best known for its work with television and film writers. Organizers at the two unions estimated that the digital wave has brought them 2,000 new members.

The trend was in evidence on Friday when workers at Vox Media, whose holdings include SB Nation, Eater, The Verge and the namesake news site, ratified a new contract after more than a year of bargaining. In an email to the staff, the chief executive, Jim Bankoff, announced that the company would extend certain features of the union contract — such as a 16-week leave for new parents and a new emphasis on diversity — to all employees.

Amy Plitt, the Curbed NY editor and a member of the Vox bargaining committee, said that after the agreement became public, she noticed posts on Twitter saying Vox Media looked like an attractive place to work.

“I think it will make it easier for companies to bring in talented voices, who ultimately make these brands better,” she added.

Things are more contentious at BuzzFeed. Of the site’s roughly 1,250 employees, it is the 200 or so journalists at BuzzFeed News, the division led by the editor Ben Smith, who are taking part in the union drive. Among the sticking points between them and company leaders is how to define which employees would be members of the union.

During a meeting with staff in 2015, BuzzFeed’s chief executive, Jonah Peretti, expressed his opposition to a union at the company he co-founded.

“I don’t think a union is right for BuzzFeed,” Mr. Peretti said. He argued that it would put workers and managers at odds and lead to rigid job definitions that would make the company less flexible than Google or Facebook, neither of which has a union.

Nevertheless, Mr. Peretti said Monday that an offer to voluntarily recognize the union was “on the table.” The organizing committee has refused to accept that offer because it feels the proposal could unduly restrict the number of staff members who would belong to the union.

Unions are arising in digital media during hard times for the industry. More than a thousand jobs were lost at digital outlets this year, including a layoff of 15 percent of BuzzFeed’s staff.

In some instances, digital journalists have lost their jobs soon after joining unions. In 2017, days after reporters at the New York City news sites DNAInfo and Gothamist celebrated their affiliation with the Writers Guild of America East, the billionaire owner Joe Ricketts decided to shut the sites down.

Similarly, most of the union staff members at Mic, an online publication for millennials, were laid off just before Bustle Digital Group bought the site last year.

Those who profit from digital media may be reaping a whirlwind they themselves have sown. BuzzFeed, Vox and HuffPost are among the outlets that speak in the language of progressivism, partly in an effort to attract younger and more diverse readers. Lately, the publishers of those sites have been asked to back up the reams of content they have put into the world with the kind of progressive action that predates the advent of wokeness.

As Mr. Holden, the BuzzFeed News political reporter, put it: “They need to demonstrate that being socially conscious isn’t just a brand.”