June marks the 55th anniversary of the Freedom Summer, when more than 700 college students - whose average age was 21 - traveled mostly from the North to Mississippi to work with local Black-led organizations to support their civil rights work. 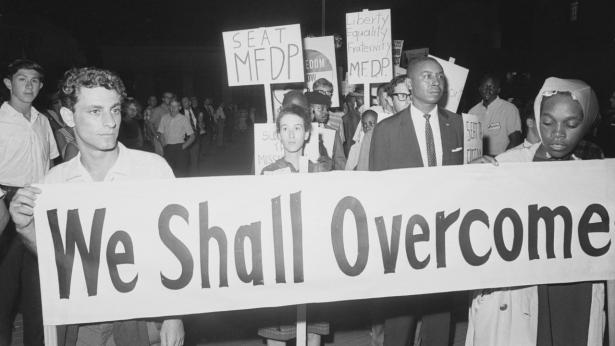 The efforts of the volunteers of 'Freedom Summer', both black and white, were an extraordinary moment in the civil rights movement.,Photograph: Bettmann / Corbis / Getty Images // TeenVogue

In 1964, under the tall green branches of a pecan tree behind her two-bedroom house, activist and civil rights leader Fannie Lou Hamer met with students and activists from across the country to strategize their efforts for Black enfranchisement and liberation. This group, made up of the Freedom Summer volunteers, influenced a turning point in American activism and politics, transforming both the way we think about the right to vote and our understanding of the power of youth organizing.

This June marks the 55th anniversary of the Freedom Summer, when more than 700 college students — a group whose average age was 21 — traveled mostly from the North to Mississippi to work with local Black-led organizations to support their civil rights work. Their mission was to register Black Mississippians who routinely faced violence, intimidation, poll taxes, and literacy tests when they attempted to register to vote. These activists also sought to establish Freedom Schools for Black students and community-driven education centered on Black life and culture, and to challenge the all-white Mississippi Democratic Party delegation at the Democratic National Convention.

Of the five congressional districts in Mississippi, between 2.94% and 11% of eligible Black voters were permitted to vote, and in the (2nd District)[https://www.crmvet.org/docs/ms_voter_stats.pdf] where Hamer lived, 52.4% of the adult population were Black and yet only 2.97% were permitted to register to vote. The summer of 1964 forever changed the course of voting rights in America, driven in large part by the leadership of Hamer, the daughter of sharecroppers, who was fired from her job of picking cotton for trying to register to vote, and Robert Moses, a Student Nonviolent Coordinating Committee (SNCC) organizer turned national activist.

Mississippi’s government instituted dusk-to-dawn curfews and attempted to ban the implementation of Freedom Schools. In response to the growing power of the civil rights movement, the state’s Klu Klux Klan (KKK) ballooned in membership across the state; in one night, crosses were burned by the KKK in 64 out of the state’s 82 counties. In just over two months, 37 Black churches were bombed or burned, and several people were murdered, including civil rights workers James Chaney, Andrew Goodman, and Michael Schwerner. Scores of people were beaten and arrested.

Violence against activists had proven fatal just before the summer of 1964. In 1963, Hamer was on a bus returning home from an SNCC workshop when it was intercepted by police; she was jailed and beaten, and she suffered permanent damage to her kidneys as a result. That year also saw the murder of National Association for the Advancement of Colored People (NAACP) Mississippi state field secretary Medgar Evers.

Attempted intimidation through the burning or bombing of Black churches in the South was commonplace, and racist “separate but equal” legislation was overturned only a decade prior, though this didn’t stop the continuation of the practice. But instead of yielding to fear, activists increased their national profile. Under the leadership of the SNCC’s Moses, the Council of Federated Organizations (COFO) directed the different actions across the state, and collaborated with the NAACP, the NAACP Youth Council, the Congress for Racial Equality (CORE), and SNCC to utilize the activist networks already in place in various areas to fight segregationist thinking and draw media and government attention to their efforts.

The Freedom Summer lasted only 10 weeks, but in that time, those involved helped alter the state’s political, educational, and social landscape. In order to register voters, volunteers canvassed neighborhoods where eligible yet unregistered Black citizens lived, going door to door talking about the power of the vote. By the end of the summer, 17,000 Black residents had attempted to register (though local registrars ultimately accepted only 1,600 completed applications). And volunteers established 41 Freedom Schools that served 3,000 Black students throughout the state.

The activism and the violence of the summer pushed the federal government to act and sparked a national movement. The following year, in 1965, President Lyndon Johnson signed the Voting Rights Act, which made illegal all of the barriers and intimidation tactics used against potential Black and low-income voters, such as poll taxes, literacy tests, questionnaires, and the threat of violence. In 1964, just 6.7% of eligible Black Mississippians were registered to vote. By 1967, that number increased to 59.8%. Nationally, by the end of 1965, more than 250,000 Black people were registered to vote.

In the summer of 1965, Hamer also worked to change the face of politicians by helping to lay the foundation of the Mississippi Freedom Democratic Party(MFDP). Disillusioned by Southern Democrats who had filibustered the Civil Rights Act to prevent its passage and fed up with false representation — all of the Mississippi federal legislators in 1964 were white — she ran for delegate that year as a MFDP candidate against a white incumbent who had been elected 12 times in a majority Black district. Although she didn’t win, she said, “I’m showing the people that a negro can run for office.”

Her effort paved the way for other Black leaders to run for office. Between 1968 and 1974, the number of Black elected officials in the state had increased from 29 to 191. The U.S. Congress passed amendments to the Voting Rights Act to include protections for non-native English speakers and other historically disenfranchised groups on four different occasions after 1965, too.

Despite the success of Hamer and so many other organizers, in the past decade, we have seen a targeted rollback of the very rights that Freedom Summer volunteers fought for. In 2013, the Supreme Court overturned Section 5 of the Voting Rights Act, which stated that counties and states with a history of voter discrimination based on race must first obtain pre-approval of any voting-rules changes that might affect miniorities. This repeal facilitated state policy decisionsto restrict access to voting in ways that disproportionately impact people of color, without explicitly mentioning race, including cutting the number of days or hours a polling location is open, decreasing the accessibility of mail-in-ballots, and decreasing the number of days of early voting.

In 2018, Floridians voted to return voting rights to the formerly incarcerated, though they may be forcedto pay back restitution and court fees before voting, effectively instituting a poll tax. Last year’s midterms saw some of the most egregious attempts to suppress the Black vote in recent years — gubernatorial candidate Stacey Abrams lost by just 55,000 votes, after the state had removed850,000 eligible voters from the voting rolls without their consent or knowledge.

We also have a criminal justice system that criminalizes impoverishment and vilifies Black people, jailing them at five times the rate of whites — and only in Vermont and Maine can an incarcerated person vote. That means in 48 other states, incarcerated people undergo a “civil death,” underscoring the 1960s activist creed that if you “don’t vote, you don’t count.” Their ability to vote matters, too.

These examples show how the right to vote is precarious — that even when people use their voices, it is not always guaranteed that our leaders will listen. A. Philip Randolph, a civil rights leader and activist who organized the first predominantly Black labor union, said “Justice is never given, it is exacted.” Freedom is not bestowed, we fight for it — just as the activists of the Freedom Summer did more than 50 years ago.

[Ray Uyeda is an author on Teen Vogue.]