A new history of bigoted opposition to immigrants through the manipulation of fake science shows the most vociferous baiters of emigres in the past were among the most privileged U.S. ruling class members. 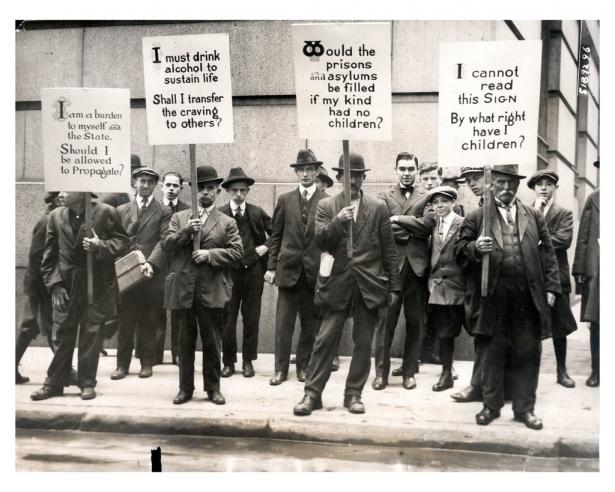 Today’s vehement demands to stop immigrants are neither new nor proportional to their numbers. Immigrants arriving between 2000 and 2010 constituted approximately 3 percent of the United States population, while those arriving between 1900 and 1910 constituted 8.9 percent of the population. The nativist movement, as anti-immigrant campaigns were once called, began a century and a half ago, directed first against the Irish, later against those arriving from southern and eastern Europe. The case against these European immigrants was remarkably similar to today’s complaints about those at our gates: They steal jobs from the native-born, they are costly to taxpayers, they don’t respect American values, and they are inclined to be criminals.

This does not mean that history repeats itself. Up through at least the 1920s nativists primarily targeted Catholics and Jews. And their bigotry was quite possibly shared by the majority of white Protestant Americans. Still, in a vivid new book by Daniel Okrent, who was the first public editor of The New York Times, “The Guarded Gate,” jam-packed with appalling examples, most readers will be unable to miss the book’s implications for present-day anti-immigration sentiment.

Okrent’s is largely an intellectual history — if we can use that term to describe the shoddy thinking of his subjects — of nativist ideology and ideologues from the mid-19th century to the first comprehensive immigration restriction law of 1924. He explores who these nativist leaders were and how their elite status allowed them to pass off bogus claims as science. Nativist leaders were among the most distinguished men of the country: upper-class, highly educated and Protestant, men who personally had nothing to fear from new immigrants.

Let me introduce some of them. Charles Benedict Davenport, Harvard graduate, Harvard professor, descendant of Puritans. Robert DeCourcy Ward, whose ancestors arrived with John Winthrop. Prescott Farnsworth Hall, who descended from Charlemagne. Charles Warren, whose ancestors came on the Mayflower. H. Fairfield Osborn, son of a railroad tycoon, president of the American Museum of Natural History. Henry Cabot Lodge, of whom Okrent writes, “There wasn’t a box on the Brahmin checklist he didn’t tick.” Their class privilege is important because then, as now, critics tend to associate bigotry with poor, uneducated rural and working-class people, a misleading analysis.

All scientists, and all boasting familiarity with Mendelian genetics, these nativists nevertheless considered loyalty and “shiftlessness,” for example, to be genetic characteristics. Davenport’s 1919 “The Trait Book” listed 3,500 human genetic attributes, each assigned a numerical value; these included “forwardness,” “forehead, low,” “fondness of children,” “frivolousness.” Osborn opined that “education and environment do not fundamentally alter racial values.” To gather “facts” about who could become desirable Americans, nativist leaders sought public opinion, but their respondents were limited to men listed in “Who’s Who,” Harvard Medical School graduates, prominent white Southerners and labor union officials such as Samuel Gompers (an ardent restrictionist). This extremely non-random sample reflected the kind of people whose opinions these scientists respected. Leaving nothing to chance, their survey used a multiple-choice questionnaire; respondents were asked to rank several groups in order of desirability: “native born; persons from northern Europe; skilled persons; families with some money, intending to settle in the country; British; Scandinavians; Germans.”

Henry Goddard’s famed Kallikak study of “defectives” persuaded more than 30 states to impose forced sterilization on the “feeble-minded.” He also tested arrivals at Ellis Island and “found” that 83 percent of the Jews, 80 percent of Hungarians, 79 percent of Italians were either “morons” or “imbeciles.”

Misunderstanding what was and wasn’t genetic led to enthusiasm for eugenics, the science of human breeding. Not all eugenics was discriminatory. In the late 19th century progressive reformers used eugenic arguments for improving public health through, for example, the promotion of healthy pregnancies. But by the 1920s eugenicists were ranking ethnic groups as superior or inferior, and their work was considered state-of-the-art science, taught in standard biology textbooks. Up to World War II nativist bigotry could be found across the political spectrum. Socialists, anarchists, civil rights leaders (including W.E.B. Du Bois), Jewish leaders and feminists tried unsuccessfully to formulate progressive versions of eugenics. Few of the mainstream eugenicists, however, considered Jews and people of color as desirable immigrants. The young Eleanor Roosevelt — who would later become an outspoken anti-racist — described someone as “an interesting little man, but very Jew,” and allowed that she’d “rather be hung” than attend another “Jew party.” The most influential opposition to nativism came from a different sector of the wealthy: industrialists who wanted the cheap labor only immigrants could provide.

Okrent’s discussion misses a major aspect of eugenics: anxiety about falling fertility among educated women. When Theodore Roosevelt spoke of “race suicide” as a national problem, he was worrying that a significant minority of privileged women were not marrying and reproducing. They chose to be single, and in some cases to form romantic partnerships with other women, because dominant gender norms labeled employment and public activism improper activities for married women.

Supremely confident of their objectivity, nativist leaders sought to put eugenics into practice. Willet Hays — a plant breeder — proposed that each American be assigned an 11-digit “number name,” a score of their genetic lineage, to guarantee their “mating with those of equal general excellence.” Okrent reproduces a sample report on an individual’s physical, mental and temperamental qualities. Eugenicists persuaded the Public Health Service to offer certificates of eugenic suitability for marriage.

The temperature of nativist bigotry reached new heights in the World War I era, through the efforts of Madison Grant, also a proud descendant of Puritans. His 1916 book, “The Passing of the Great Race,” promoted the myth that the “master race” was facing extinction — this view, incidentally, was recently borrowed by the white nationalists in Charlottesville, Va., who were chanting, “Jews will not replace us.” Eugenic claims became increasingly absurd: Dante and Leonardo were Nordics, Marco Polo and Galileo were really Germans, Jesus was not a Jew.

Nativism’s denouement was the Johnson-Reed Act of 1924. Previous immigration restrictions targeted particular groups — notably people from Asia — but this comprehensive law aimed not just to limit immigration but to preserve white Protestant dominance in America. It assigned a quota to each nation, ranging from 51,000 for Germany to 2,000 for Russia to 1,100 for the entire African continent. The northern Ku Klux Klan drummed up support for the law, claiming that America was ordained by God to be a white Protestant nation. Okrent slights the Klan’s influence, understandably, because his book is a history of elite nativist spokesmen rather than a social history. But recognizing the Klan’s campaign can serve as a reminder that bigotry has no life of its own; it needs deliberate promotion. The 1920s K.K.K. gained astonishing strength — four to six million members — and operated a sophisticated lobbying and get-out-the-vote machine, putting into office 11 governors, 45 congressmen and hundreds of state, county and municipal officials. The Klan-identified congressman Albert Johnson, chairman of the House immigration committee, shepherded the anti-immigration bill into enactment. The law remained in effect until 1965, with some dreadful consequences. To name just one: It justified the refusal to accept refugees from Nazism, including 20,000 Jewish children.

Equally chilling is Okrent’s documentation of American influence on Nazi “race hygiene.” As early as 1932 Walter Schultze of the Nazi euthanasia program called on German geneticists to “heed the example” of the United States. The Nazi Handbook for Law and Legislation cited American immigration law as a model for Germany. Osborn complained that negative press about the Nazis resulted from Jewish influence. Perhaps paradoxically, it was the Nazi genocide that stigmatized eugenics forever.

But bigotry was by no means buried by World War II. Its targets are fungible but it typically blames disadvantaged groups for problems more often created by privileged groups. It is a stream that has sometimes been forced underground, and some argue that polite, whispered racism is as bad as the loud kind. Okrent’s history belies that argument: Quiet bigotry should be condemned, but when it is shouted and legitimated by people with power and influence, it can become deadly.

Book author Daniel Okrent was the first public editor of The New York Times, editor-at-large of Time, Inc., and managing editor of Life magazine. He worked in book publishing as an editor at Knopf and Viking, and was editor-in-chief of general books at Harcourt Brace. He was also a featured commentator on two Ken Burns series. In addition to The Guarded Gate, his books include Last Call,  and Great Fortune, which was a finalist for the 2004 Pulitzer Prize in history. He lives in Manhattan and on Cape Cod with his wife, poet Rebecca Okrent.

[Essayist Linda Gordon is the author of “The Second Coming of the KKK.” An American feminist and historian who has taught at New York University, the University of Wisconsin-Madison and the University of Massachusetts-Boston, she is the winner of  the Marfield Prize for Dorothea Lange: A Life Beyond Limits, and the Antonovych Prize for Cossack Rebellions: Social Turmoil in the Sixteenth-Century Ukraine (SUNY Press, 1983)].