`The Squad' Is the Future of the Democratic Party

The squad understands that "diversity" is meaningless if the measure of success is "sameness." The congresswomen are choosing to do politics a different way because they recognize that Congress has never worked for their communities. 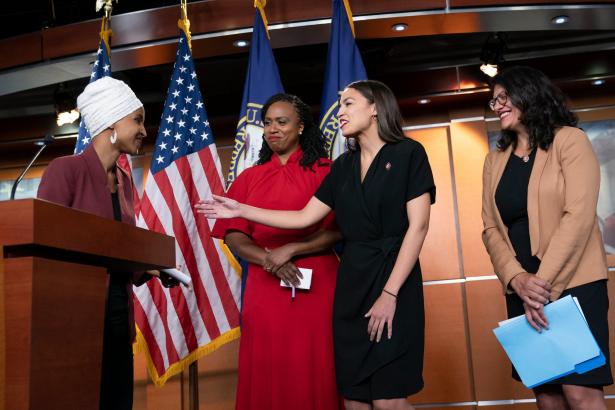 Representative Ayanna Pressley broke with traditional diversity politics last month when she said at a conference in Philadelphia, “we don’t need black faces that don’t want to be a black voice.” Instead, “we need you to represent that voice.”

The members of the so-called squad who were also on the panel nodded in agreement. They are the defiant and unapologetic voices of the communities that produced them. Since being elected last fall, these four progressive Democratic congresswomen have pushed the limits of what most liberals mean by the contested term “diversity. ”

Some of their colleagues in Washington may have preferred that they simply come in and add color to the halls of Congress — but in every other way behave as their long-established white predecessors have.

But they have a different agenda. They have a transformative notion of diversity that comes with a different set of expectations and metrics. They insist on bringing the concerns of historically marginalized communities into the rooms where decisions are made, even when that is seen as impolite or inappropriate.

This is evident through their politics, priorities and style — not only their presence. Consider Rashida Tlaib’s “Lift + Act” bill, which comes as close as any to advancing the radical economic principle of universal guaranteed income that Martin Luther King Jr. so eloquently advocated some 50 years ago.

They’re exposing the false belief that American foreign policy is infallible. This is exemplified by their critique of Washington’s unconditional support for Israel. And recall the memorable hearing in February when Ilhan Omar challenged Elliott Abrams, a Trump administration official, over his role in supporting Central American death squads in the 1980s.

All of them, along with some other Democrats, have called for the outright abolition of Immigration and Customs Enforcement because of its widely publicized mistreatment of migrant families and children.

The squad understands that “diversity” is meaningless if the measure of success is “sameness.” The congresswomen are choosing to do politics a different way because they recognize that Congress has never worked for their communities.

From the start, Alexandria Ocasio-Cortez was urged to stay in her place when she insisted upon committee appointments deemed out of reach for a freshman representative. It was those committees that would have the most impact on the values she was elected to advance, and so she persisted, violating protocol in the process.

She was doing something unprecedented when, as a political neophyte, she introduced the Green New Deal resolution without support from the party leadership. Similarly, Ms. Tlaib and Ms. Omar have called for President Trump’s impeachment and passionately advocated the rights of Palestinians, breaking with the more tactically conservative approach of the House speaker, Nancy Pelosi, on both matters. However, as the scholar-activist Keeanga-Yamahtta Taylor wrote in Jacobin, they don’t just represent different personalities vis-à-vis Ms. Pelosi but different worldviews.

Over the past nine months, the squad’s members have made good on their promises to be agents of change, not just fresh faces. Radical inclusivity means that people from different communities, backgrounds and ideological traditions will do their jobs differently and will bring new sensibilities, commitments and understanding with them when they sit at the tables of power. If they are doing their jobs, they will be accountable to people who sent them there, not maintaining the status quo. Anything less is merely cosmetic.

One outcome of exclusion and white privilege is that people of color don’t see ourselves reflected in positions of power often enough. That is the least of it. A more consequential outcome is that our communities are underserved, our children racially profiled by the police, unfairly pushed out of schools or locked up in disproportionate numbers. “We expect elected officials to fight hard for a progressive agenda, and we are not cutting anyone slack simply because they look like us,” argues Chinyere Tutashinda, a leader in the Movement for Black Lives, a coalition of more than 150 black-led organizations across the country.

Ms. Tlaib cares deeply about accountability. She often tells her audiences that she proudly represents Michigan’s 13th Congressional District, one of the poorest in the country, with one of the largest black populations of any district. She is committed to serving its interests and speaking with its voice. When, soon after she was sworn into office in January, she proclaimed that “we are going to impeach” the president, that is the constituency she was speaking for: a population that feels assaulted by Republican policies and abandoned by mainstream Democrats.

The squad has tilled new ground in reanimating a fighting spirit within the Democratic Party and revived its left flank. A more timid approach would have been to go to Washington and blend in. The women’s approach is admirably and courageously to stand out.

This is threatening and offensive to many of their conservative and, dare I say, racist colleagues. In his typical meanspirited manner, the president has hurled numerous insults at them; others have piled on too. Senator Lindsey Graham of South Carolina was all but foaming at the mouth on Fox News in July. They are “a bunch of communists,” he said, they “hate our own country.” And “they stand for all the things most Americans disagree with.”

Really? A new poll by The Economist and YouGov indicates that each of the four women has a higher approval rating than Mr. Trump himself. And among independent voters, Mr. Trump still loses by more than 6 percentage points to each squad member. Speaker Pelosi, for her part, has alternated among a mild-mannered defense of her junior colleagues, dismissive comments and an outright reprimand in one instance.

A similar dynamic is playing out in politics around the country, as the noted political strategist Jessica Byrd told me. Her electoral firm, Three Point Strategies, has been helping black activists win elections over the last five years. “Without fail, these women are discounted until the voices of the people they represent become too loud to ignore,” she said. “These elections are an incredible symbol that movement can win and is winning. They are a symbol that accountability is possible.”

Many young activists feel protective of the congresswomen, seeing their vulnerabilities as linked. Thenjiwe McHarris was one of 100 black women who hosted a rally in April to protest the attacks and threats against Ms. Omar. “What’s happening to the squad is deeply connected to what’s happening to our communities and our progressive movements,” she told me.

But the squad, and so many other women of color in politics, are not the sit-down-and-shut-up types. And that has earned them widespread adoration. Thousands have signed petitions in their support. The congresswomen collectively enjoy millions of followers on Twitter. And they earn high praise from the millennial activists who have played a monumental but largely unknown role in pushing the party left.

The squad was in part propelled to prominence by the Justice Democrats, a millennial-led group that has made the Democratic Party more accountable to its base through recruiting and endorsing candidates in competitive primaries.

Maurice Mitchell, who now runs the Working Families Party, sees them as central to a seismic shift in electoral politics post-2016. “This moment has radicalized liberals and electoralized radicals,” he told me. Meaning there are new political actors with new agendas and expectations.

I am reminded of another “diversity” moment when the establishment felt threatened. It was when Sonia Sotomayor was being considered for the Supreme Court in 2009. Her opponents had dredged up a speech from eight years earlier in which she said: “I would hope that a wise Latina woman with the richness of her experiences would more often than not reach a better conclusion than a white male who hasn’t lived that life.”

She opined that the experience of racial and gender oppression, learned survival strategies and cultural practices could and should be brought to bear when representatives of marginalized communities assume decision-making roles. This caused quite a stir.

But what she rightly seemed to suggest was that, if who we are doesn’t matter, we are aiming for tokenism more than transformation of elite institutions. She was also intimating that, if I come in, my family, my community, my elders, my people, will in some form, come with me.

These women — Justice Sotomayor and the squad — have all insisted upon bringing their whole selves into these insider spaces where women and people of color have been historically told to either “go back” to where they came from, or “listen and learn” in terms of how things are done if they want to succeed. The former message comes from the right, the latter from liberal insiders.

A key demand of this new generation of activists of color has been accountability. They have seen historic numbers of women and black and brown people elected to office, including the nation’s first black president. That alone is insufficient, they have decided. They have seen the limits of representational politics. They want leaders who are immersed in communities who remember where they came from when they attain positions of power. Or better yet, politicians who never leave in all the ways that matter.

Well, the squad members, all with varying activist backgrounds, are a part of that generation. They are products of the Movement for Black Lives, #MeToo, Occupy Wall Street and an increasingly militant immigrant rights movement. These bold, game-changing social movements are led by a cohort of savvy young women organizers who are not afraid to speak truth to power and upset business as usual.

If the millennial social movements are not “your grandmother’s” social movements, then the squad members are certainly not your typical “minority” politicians. They are wisely acting as if they represent the demographic and political majority that their generation will become. It is significant that a majority of millennials polled by Harvard researchers in 2016 rejected capitalism and leaned toward the left politics that these four congresswomen represent.

They are not only the future of the Democratic Party. They are the future. So are their ideals. And we need more politicians like them.

[Barbara Ransby (@BarbaraRansby), a professor of history, gender and women’s studies and African-American studies at the University of Illinois at Chicago, is the author of “Ella Baker and the Black Freedom Movement,” “Eslanda” and “Making All Black Lives Matter.”]