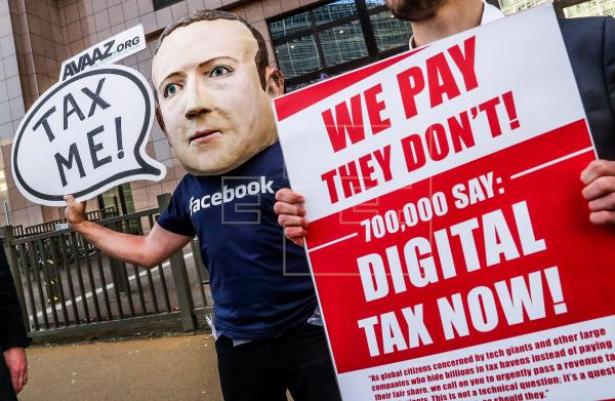 An Avaaz activist wearing a mask depicting Facebook's CEO Mark Zuckerberg holds a banner reading 'Tax me' at the start of an EU Finance Ministers meeting in front of the EC in Brussels, Belgium, Dec. 4, 2018 , Credit: EPA-EFE/STEPHANIE LECOCQ

Who gets to tax Google and Facebook? That’s the kernel of a highly technical debate going on between 130 countries. Major European governments want more cash from Big Tech groups, but the Americans are likely to resist.

If elections can be hacked, so can democracy.

Started almost two decades ago with a stated mission to “provide information to Chinese communities to help immigrants assimilate into American society,” The Epoch Times now wields one of the biggest social media followings of any news outlet.

No News of Brazil’s Mass Protests Against Bolsonaro

Everyone in the foreign correspondent community knows that the Brazilian military police are not impartial judges of crowd size. When Anglo newspapers do report on progressive protests in Brazil, however, they tend to play along with the game.

A hidden army of tens of thousands of content moderators is at work every day — in often appalling conditions — to make the internet as we know it habitable. We should hold Silicon Valley responsible.

Social media networks were flooded with odes to Palestinian grandmothers over the weekend, with the hashtag #MyPalestinianSitty. The hashtag took off after US Congresswoman Rashida Tlaib took to Twitter to express her sadness that she would be unable to visit her grandmother, or sitty in Arabic, after Israel banned her.

The "Antifa Shooter” - A Myth Built on Tweets

The right is using the Dayton shooter's Twitter account to make spurious connections between antiracist ideas and mass murder.