The prime minister’s action might adhere to the letter of the law but in spirit it is an act of wanton constitutional vandalism. Prorogation is a device to silence parliament. Trump has tweeted his support. Is this what Trump sees for our country. 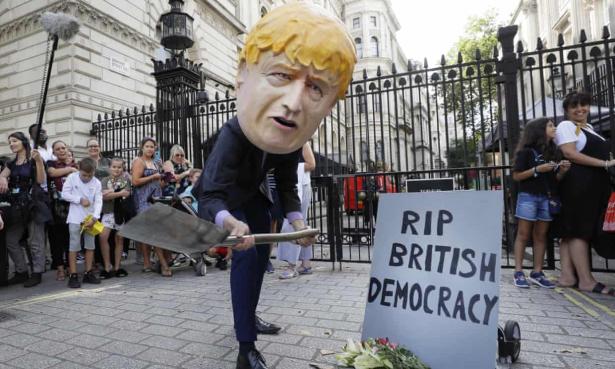 A protester outside Downing Street on 28 August 2019. ‘Mr Johnson is hijacking powers symbolically vested in the crown and wielding them in aggression against his parliamentary opponents.’, Photograph: Kirsty Wigglesworth/AP // The Guardian

Boris Johnson has written many dishonest things in his life, but few as consequential as the letter sent on Wednesday to MPs explaining his decision to seek a prorogation of parliament. The prime minister says that a new Commons session is needed to enact a “bold and ambitious legislative agenda”. To that end the current session must be closed. His plan envisages a Queen’s speech in the middle of October

No one is fooled, although government ministers make fools of themselves by parroting their leader’s line. Prorogation is a device to silence parliament during a critical period approaching the 31 October Brexit deadline. Mr Johnson cannot be sure of majority support in the Commons for a withdrawal agreement and he would certainly not have the numbers for leaving the EU without one. So he wants to dispense with legislative scrutiny altogether.

The chosen method for pursuing that goal observes the letter of the law, but in spirit it is revolutionary and dangerous. John Bercow, the Commons speaker, calls it a “constitutional outrage” and opposition MPs have decried what they see as a full-frontal assault on British democracy. At the intemperate end of the rhetorical spectrum (amplified on social media), Mr Johnson’s move is decried as a “coup” and a step down the slippery slope towards dictatorship.

Hyperbole is inevitable at times of political stress and it is true that Mr Johnson is pushing the UK into a constitutional crisis. But to properly assess the gravity of the situation it helps also to keep it in perspective. This is a cynical, premeditated blow against the principle of parliamentary democracy but it is not a total subversion of the constitutional order on a par with a military putsch. The prime minister is exhibiting the irresponsible arrogance of which he has long been known capable. But he is also operating within the technical parameters of what the British political system allows in all its archaic peculiarity.

That is what makes prorogation so devious. Like any confidence trickster, Mr Johnson knows how to leaven a deception with flecks of truth. He is correct in asserting that the current Commons session has been unusually long, that the flow of legislation dried up months ago and that a new government is entitled to set out its stall. Under normal circumstances, prorogation this autumn would be in order – overdue, in fact. But nothing about the present circumstances is normal. In a matter of weeks, the UK faces a total overhaul in economic, diplomatic and strategic relations with the rest of the world. The prime minister and his cabinet have signalled explicitly that they do not care how much damage is done in the process. They would choose ruin over delay. This is a time when the checks and balances of a parliamentary democracy must operate vigorously.

When Mr Johnson asserts that there will be “ample time” to debate Brexit before the deadline, he insults every MP who cares about a functional relationship between Britain and the rest of Europe. The offence is intentional. It is a provocation to sharpen dividing lines between Brexit ultras and the rest. If the prime minister’s efforts to sideline parliament fail, he could find himself in an election. Ramping up confrontation with “remainer” opponents – caricatured in campaign terms as an establishment hell-bent on subverting the “will of the people” – is one way of anticipating that scenario.

But it is not just remainers who are appalled by Mr Johnson’s behaviour. Prorogation is an exercise of royal prerogative that is tolerable in a modern democracy only insofar as it is ceremonial. Its deployment by a prime minister without an electoral mandate of his own, in pursuit of a partisan agenda for which there is no Commons majority, represents a grotesque abuse of the country’s highest political office. Mr Johnson is hijacking powers symbolically vested in the crown and wielding them in aggression against his parliamentary opponents. That he does it in pursuit of a hard Brexit is distressing for pro-Europeans. That he is prepared to do it at all should alarm everyone who values the traditions of British democracy. 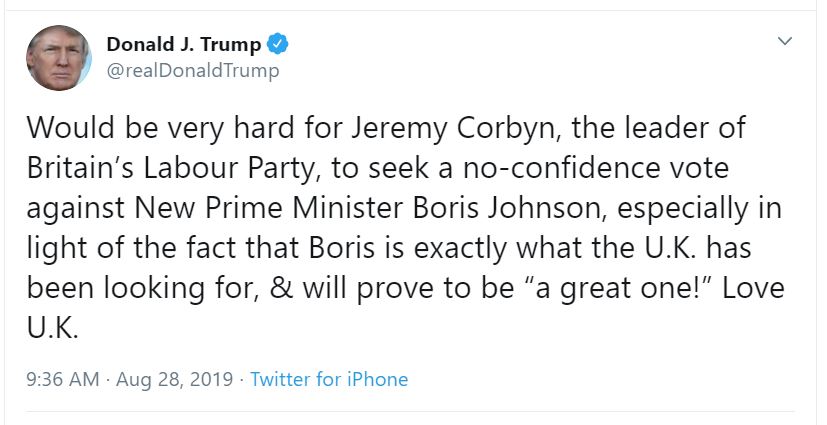