5 Reasons for Workers to Celebrate This Labor Day

The U.S. labor movement is under siege by powerful anti-union forces, including the Trump administration. But with approval of unions at a 15-year high, and a wave of labor militancy on the rise, working people have plenty to celebrate. 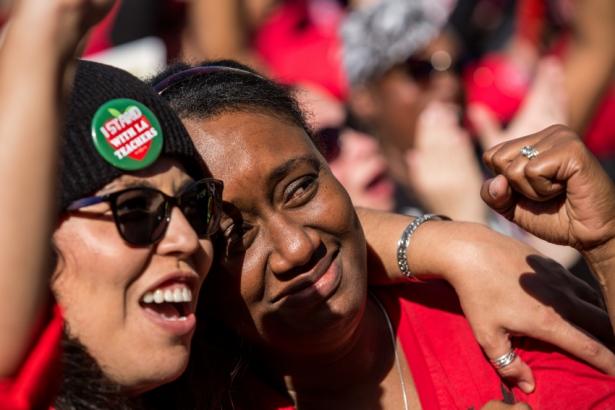 Workers have plenty to cheer this labor day, photo by Scott Heins/Getty Images

Labor Day often gets short shrift as a worker’s holiday. Marked primarily by sales on patio furniture and mattresses, the day also has a more muddled history than May Day, which stands for internationalism and solidarity among the working class. Labor Day, by contrast, was declared a federal holiday in 1894 by President Grover Cleveland, fresh off his administration’s violent suppression of the Pullman railroad strike.

But Labor Day was first celebrated twelve years earlier, when a coalition of socialists and labor activists organized a mass march in New York City calling for shorter hours, safer working conditions, increased pay and a labor holiday. On September 5, 1882, 10,000 people took to the streets of New York instead.

That history, plus the simple fact that workers deserve more than one holiday, makes Labor Day worth celebrating. And this year, there are more reasons than usual for working people to rejoice.

The teacher strike wave rolls on

The wave of teacher strikes that began in red states last year has continued apace in some of the biggest U.S. cities. Earlier this year, Los Angeles teachers wrung a hard-won deal from their school district through a week-long strike.

A first-ever charter strike in Chicago last year kicked off a domino effect—more than 700 Chicago charter teachers at 22 different campuses have walked off the job in the past year, and they’re winning things previously unthinkable in the traditionally union-free charter industry.

An impending teacher strike in Las Vegas is drawing some creative solidarity from students, and the Chicago Teachers Union—whose 2012 walkout arguably laid the groundwork for renewed teacher militancy—could be on the verge of another massive strike.

Workers are winning strikes in the private sector, too

There’s an important caveat to statistics showing that the number of striking workers is at a two-decade high: Most of this strike activity is still limited to the public sector.

In the private sector, there is not yet an equivalent strike wave. There are, however, some encouraging signs. A rare, coordinated strike by workers at nearly 30 hotels in Chicago ended largely in victory (workers at one hotel are still holding out). This spring, locomotive plant workers in Erie, Pennsylvania staged a nine-day strike against the company that purchased their facility and attempted to impose significantly lower wages for new hires. Negotiations continued into the summer, and the deal the union eventually accepted included some concessions. But the strike against a two-tier wage system—long-ago conceded by most manufacturing unions—was an important sign of life in the once-militant sector.

Labor support for Green New Deal is on the rise

To hear the mainstream media tell it, blue-collar workers are united in their opposition to climate action. In June, Politico published an article citing local labor leaders who leveled a dire warning at Democrats: the Green New Deal is pushing members into the Republican camp.

In fact, a survey released this year from the think tank Data for Progress found that 62 percent of current union members back the GND. That figure suggests that while climate activists certainly can’t take labor’s backing as a given, there’s substantial support from workers—and the biggest factor in growing this support is organizing with labor to ensure that the Green New Deal benefits workers, and that they’re at the core of the fight to pass it.

This year, the Green New Deal picked up major endorsements from the Service Employees International Union and the Association of Flight Attendants led by president Sara Nelson. In May, Nelson spoke to In These Times about how Green New Deal advocates can engage labor:

Make labor central to the discussion, including labor rights, labor protections and labor expertise. We must recognize that labor unions were among the first to fight for the environment because it was our workspaces that had pollutants, our communities that industry polluted. Let’s not dismiss the labor movement. Let’s recognize and engage the infrastructure and experience of the labor movement to make this work.

Speaking of Sara Nelson, her star has been rising since she called for a general strike to end the government shutdown in January, and she could potentially end up succeeding Richard Trumka as the next president of the AFL-CIO.

While they’re still few in number, it’s a breath of fresh air to see national labor leaders who come out of the rank-and-file use their positions to encourage, rather than stifle, independent action by workers, happily break bread with socialists and readily draw connections between labor issues and those of climate change and immigration.

Labor could actually make gains through the 2020 elections

Let’s be honest: Presidential elections have long been a dead-end for unions. Awarding early endorsements without member input and spending millions of dollars on behalf of candidates who won’t even talk about workers’ rights is not a winning strategy.

This year could be different.

With Democratic candidates scrambling to tack to the left, the primaries are also putting important labor policy ideas back on the table. As Jeremy Gantz reported in July, 2020 candidates are rushing to embrace worker-friendly policies in order to win labor’s support.

Bernie Sanders' Workplace Democracy Plan, in particular, includes ideas that should get a full hearing—ending "at-will" employment, expanding workers' rights to strike and permitting collective bargaining at the sectoral level.

Sanders is also using his campaign infrastructure to turn supporters out for strikes and labor actions, another welcome development for labor when it comes to presidential campaign season.

The U.S. labor movement may still be under siege, thanks to powerful anti-union forces, including the Trump administration. But with approval of unions at a 15-year high, and a wave of labor militancy on the rise, working people have plenty to celebrate this Labor Day.

Rebecca Burns is an award-winning investigative reporter whose work has appeared in The Baffler, the Chicago Reader, The Intercept and other outlets. She is a contributing editor at In These Times. Follow her on Twitter @rejburns. More by Rebecca Burns.