Bill McKibben: This Climate Strike Is Part of the Disruption We Need

The global climate strike on Sept. 20. will almost certainly be the biggest day of climate action in the planet’s history, writes Bill McKibben. “It can’t just be young people. It needs to be all of us.”

Business as usual is what’s doing us in.

We live on a planet that finds itself rather suddenly in the midst of an enormous physical crisis. Because we burn so much coal and gas and oil, the atmosphere of our world is changing rapidly, and that atmospheric change is producing record heat. July was the hottest month we’ve ever recorded. Scientists predict with confidence that we stand on the edge of the sixth great extinction event of the last billion years. People are dying in large numbers and being left homeless; millions are already on the move because they have no choice.

And yet we continue on with our usual patterns. We get up each morning and do pretty much what we did the day before. It’s not like the last time we were in an existential crisis, when Americans signed up for the Army and crossed the Atlantic to face down fascism and when the people back home signed up for new jobs and changed their daily lives.

That’s why it’s such good news that the climate movement has a new tactic. Pioneered last August by Greta Thunberg of Sweden, it involves disrupting business as usual. It began, of course, in schools: Within months, millions of young people around the world were striking for days at a time from their classes. Their logic was impeccable: If the institutions of our planet can’t be bothered to prepare for a world we can live in, why must we spend years preparing ourselves? If you break the social contract, why are we bound by it? 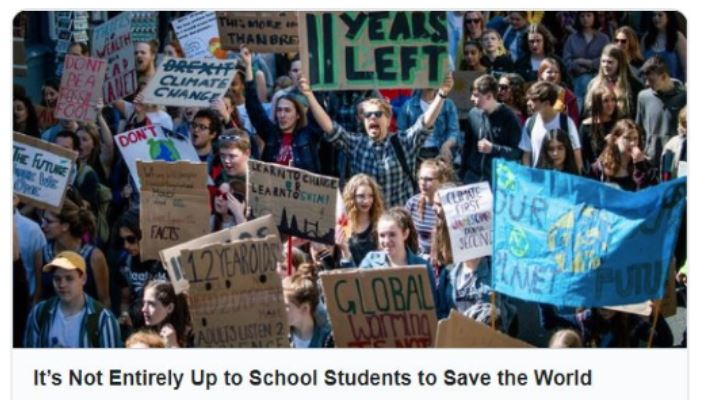 And now those young people have asked the rest of us to join in. After the last great school strike in May, they asked adults to take part next time. The date is Sept. 20, and the location is absolutely everywhere. Big trade unions in South Africa and Germany are telling workers to take the day off. Ben and Jerry’s is closing down its headquarters (stock up in advance), and if you want to buy Lush cosmetics, you’re going to be out of luck. The largest rally will likely be in New York City, where the U.N. General Assembly begins debating climate change that week—but there will be gatherings in every state and every country. It will almost certainly be the biggest day of climate action in the planet’s history. (If you want to be a part—and you do want to be a part—go to globalclimatestrike.net.)

It’s not a “strike” in the traditional sense, of course—no one is demanding better wages. But we are demanding better conditions. In the most literal sense, the world isn’t working as it should (studies say that increased heat and humidity have already reduced human work capacity as much as 10%, a figure that will double by midcentury). And what we’re saying is, disrupting business as usual is the way to get there.

This strike will not be the last such action. And activists are flooding into the electoral battles now underway and taking on the financial community, too. It’s starting to add up: The polling shows that for young Americans, climate change is far and away the most important issue.

But it can’t be just young people. It needs to be all of us—especially, perhaps, those of us who have been placidly operating on a business-as-usual basis for most of our lives, who have rarely faced truly serious disruptions in our careers and our plans. Our job is precisely to disrupt business as usual. When the planet leaves its comfort zone, we need to do the same. See you on the streets on Sept. 20!

[Bill McKibben wrote this article for YES! Magazine. Bill is the founder of the climate movement 350.org and the Schumann Distinguished Scholar in Environmental Studies at Middlebury College.]

Yes! Magazine - No Paywall. No Ads. Just Readers Like You. You can help fund powerful stories to light the way forward. Donate Now.

Use the map below to find and RSVP for an event near you.