What About Palestine? Jewish Activists for Justice Must Not Ignore Palestine

Many groups decried Trump’s remarks about Jewish disloyalty but ignored the abusive, anti-Palestinian policies underlying his comments. The clearly anti-Palestinian significance of his remarks were lost or side-lined in many of these discussions. 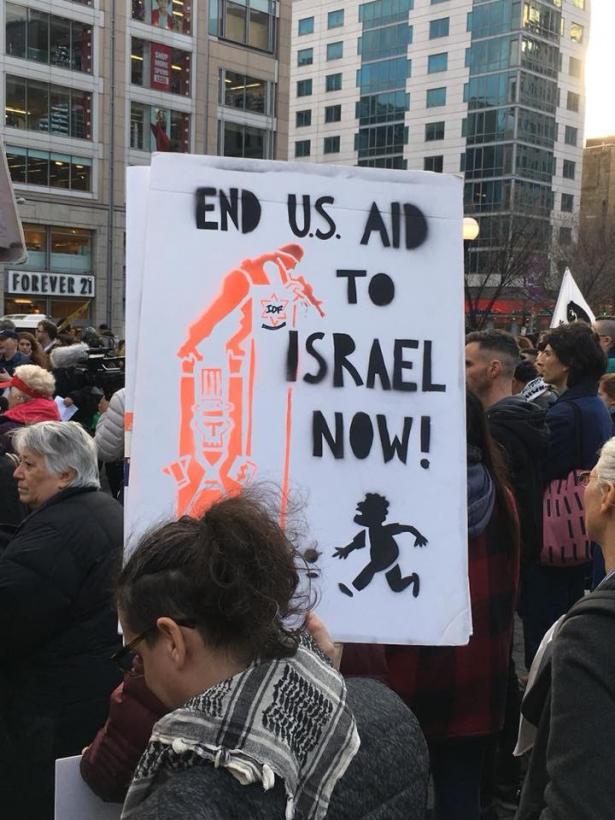 Adalah-NY: Campaign for the Boycott of Israel // Tikkun,

The President claimed recently that Jews are disloyal to Israel and the Jewish people for voting Democrat because, in his view, the Democratic party is disloyal to Israel.  Underlying Trump’s cheerleading for loyalty to Israel is his hostility towards the Palestinian people and those calling for Palestinian rights. If we look at the actions that preceded his recent remarks, we can understand them best in the context of his and the Administration’s unequivocal backing of the Israeli government; support for continued theft/annexation of Palestinian land; consistent anti-Palestinian, Islamophobic positions; and relentless attacks on Representatives Ilhan Omar and Rashida Tlaib, two pro-Palestinian rights, pro-justice, Muslim Congresswomen (whom the President said Israel shouldn’t allow into its country).

Following his remarks, a barrage of articles and tweets characterized them as anti-Semitic, asserting that the language he used was reminiscent of long-time smears accusing Jews of having “dual loyalty,” that is, of not being sufficiently loyal to the countries in which they lived (and, since the creation of Israel, of being more loyal to Israel than to their own countries).

Many groups decried Trump’s remarks about Jewish disloyalty but ignored the abusive, anti-Palestinian policies underlying his comments. The clearly anti-Palestinian significance of his remarks and the Administration’s obvious disdain for Palestinians were lost or side-lined in most of these discussions. That is, accusations of his anti-Semitism took center stage with little focus on the US government’s ongoing assaults on the Palestinian people and those supporting their struggle for freedom.

We can also not ignore the irony and hypocrisy of many who called out the President for his comments.  His remarks are not markedly different from what is said regularly by numbers of American Jewish organizations. They too assume that “good” Jews support and are invested in the state of Israel. They too make it a practice to attack Jews who support Palestinian rights. In fact, Jews working in solidarity for justice in Palestine are all too familiar with being accused of “disloyalty” (to Israel and to the Jewish people), or with being called “self-hating” Jews or–even–kapos, by some of these organizations and supporters of Israel.

Trump’s remarks did not quite fit into the dual loyalty trope as it is generally understood. His comments assume alignment between the U.S. (right wing) and Israel in which loyalty to the Republican Party ultimately means “proper” loyalty both to the U.S. and Israel, whose interests are understood to overlap. Many Jewish organizations also consider their unwavering support for Israel to be in full alignment with their support for the U.S. (whether as Democrats or Republicans). This framing reflects the anti-Palestinian politics that have been pervasive within both parties.

U.S. Administrations have played a major role in supporting Israel’s historic and ongoing brutality toward the Palestinian people. Today’s Administration is no exception and is continuing, and furthering, this policy full-force and with tremendous cruelty.

Why is it that so many groups and commentators have seized the opportunity to criticize Trump’s anti-Semitism but have avoided calling out his anti-Palestinian policies?  That criticism seems to suggest that, while Trump’s anti-Semitism is considered beyond the pale, on the flip side, the anti-Palestinian violence he is enabling isn’t considered deserving of criticism.

The public conversation around Trump’s comments focused on the charge of dual loyalty, but paid little attention to how these accusations of “disloyal” (self-hating) Jews are a direct response to support for the Palestinian-led movement for justice. As this movement for Palestinian rights continues to grow across the country and globally, both Republicans and Democrats will be faced with ongoing resistance to US support for a grave injustice of our time—Israel’s ongoing dispossession of the Palestinian people who have the right to live in dignity and with full justice in their homeland.

[Donna Nevel, a community psychologist and educator, is a founding member of Facing the Nakba and Jews Say No! and was co-founder, with Marilyn Kleinberg Neimark, of Jews for Racial and Economic Justice.]