Shot on three phones over three years and across hundreds of miles, "Midnight Traveler" takes us inside a desperate journey for a new home. 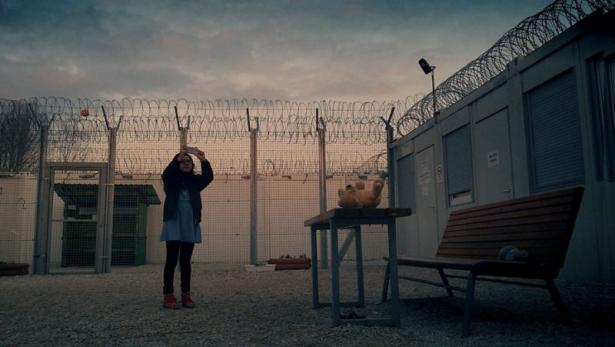 “Midnight Traveler” is a film about distance. The distance between countries, the distance between years, the distance between heaven and hell. But most of all — and increasingly as it goes along — Hassan Fazili’s vital and touching documentary is a film about the distance between people, even if just between themselves. Over the course of 1,000 days and as many miles, Hassan used three cell phones to record almost every step of his family’s perilous journey from their native Afghanistan (where the progressive director was targeted by the Taliban) to their current home in Central Europe, capturing a contemporary migrant experience from the most immediate and ground-level of perspectives. It’s a project that was made to restore a certain way of seeing; to punch a hole through the screen that separates people from the reality of what’s happening in their world. But in trying to get so close to the truth without touching it, Hassan almost fell into the same gap that he was trying to bridge

There are any number of harrowing moments in “Midnight Traveler,” but perhaps none of them is more painfully honest than the sequence where Hassan’s youngest daughter briefly goes missing at a refugee camp, and he catches himself processing the scene through his phone. His first response isn’t as a father who’s concerned about his endangered child, but as a filmmaker who’s excited about how the scene might cut into the movie he’s been shooting for so long.

“I hated myself,” he remembers via the voiceover track. “I hated cinema.” The past tense is important there. Cinema is what made Hassan a wanted man in the first place, but it’s also what made it possible for him to remember the places he left behind. It’s his memory, and his only means of sharing it with us. A camera creates some distance even from the person holding it, and while digital and virtual developments have allowed us to shrink that distance to almost imperceptible lengths, “Midnight Traveler” suggests that technology may never be able to close the gap without our help.

As microcosmic an immigrant story as Ai Weiwei’s “Human Flow” was kaleidoscopic, Hassan’s documentary offers a bracingly intimate look at the trials of modern displacement. Embedding viewers inside a single family’s search for a place where they can live in peace, the film is designed as a homeopathic antidote to apathy; it puts faces and names to a dehumanizing experience, and renders visible what so many of us tend not to see (either in headlines, on the streets, or on the other side of chain link fences).

Watching someone else’s home videos may not sound like it could be all that helpful, but the sheer banality of this footage is what endows “Midnight Traveler” with its staying power; this isn’t a long movie (it clocks in at less than 90 minutes), but it’s never more effective than when it loses track of time, and the raw nothingness of a nomadic existence begins to settle in like a fog cloud. Those effects are most clearly felt through Hassan’s eldest daughter, Nargis, a wide-eyed kid who’s young enough to mistake exile for adventure, but old enough to re-evaluate things once she gets tired of a life on the run.

The early portions of the film put her front and center, as Nargis is often seen playing with her little sister Zahra, and trying to make do with the best of what’s around. It’s Nargis’ voice who introduces us to her family by reading an optimistic excerpt from Said Bahodine Majrouh’s “Ego Monster,” her pre-adolescent voice defiantly refuting Sartre’s idea that hell is other people (“the road of life winds through hell,” she insists, making a subtle but important distinction about the nature of her journey). And it’s Nargis at whom Hassan is often pointing his camera, as she sits in the backseat of the family car and stares out the window. It’s through matter-of-fact moments like these that “Midnight Traveler” conveys how being a migrant isn’t just a political status, but also a state of being. It’s an endless series of purgatories, and the route that Hassan’s family follows towards Europe starts to feel like their only clear sense of personal history.

Emelie Mahdavian, who rescued the footage that Hassan would dump along the way and helped shape it into something resembling a story, occasionally marks time by posting the family’s location and the number of days it’s been since they fled Tajikistan. At first, on-screen graphics mark every new day. As Hassan, his wife Fatima, and their two daughters continue to make their way north, the graphics appear less often. The days begin to blur, and many of them are spent waiting in the same place. One refugee camp or spare apartment is indistinguishable from the next.

The lack of establishing shots makes it seem like the family is lost in a forest, and the excitement of the initial escape bleeds into the tedium of waiting for the next leg of the trip. Gretchen Jude’s feedback-heavy score is a dull fuzz in the brain, ominous at times but mostly just desolate (and always trying to disguise the rough, consumer-grade audio quality of the phone’s microphone). Bulgaria is inescapable. Hassan’s family feels invisible, but things get so much worse when the wrong people see them. Nargis, who seems like the most level-headed little girl alive, eventually breaks down from the boredom. Her emotional trajectory is a powerfully clear expression of how far they’ve really gone on a trek that’s so much longer than the miles they’ve traveled.

Mahdavian’s Herculean efforts to cut Hassan’s footage into a story don’t go unnoticed, but she also allows the footage to retain the haphazard feeling of home video. In between well-crafted asides about Hassan’s past and some necessary context about the bureaucratic hold-ups that await the family in each country, “Midnight Traveler” pauses for glimpses of life along the way. Neither Hassan nor Fatima ever emerge as especially well-realized characters, as he is often behind the camera, and she often seems to be avoiding it (one prolonged late-night tiff between them fails to capture anything substantial about their understandably frayed dynamic). But you see both parents on the margins, and feel their presence through the love they clearly have for their kids.

As their progress grinds to a halt, you can also feel Hassan fighting against the inertia of his film, and struggling with his impatience for its next act; he knows that stasis doesn’t make for a compelling story, and that more dramatic expressions of suffering might help people to see behind the screen in front of them. He doesn’t want this documentary to be worse, he just wants it to be over. The end comes sooner than you might fear, but it arrives abruptly, and with more than a little ambivalence about the future. What will the Fazili family gain from their epic journey, and what will the rest of glean from the ability to see it in such a gripping and condensed form? The movies may be “a machine that generates empathy” but they aren’t able to sustain it on their own. At a certain point, it will always be up to us to reach through to the other side and grab ahold of something real. “Midnight Traveler” is waiting there with its arms outstretched. It’s doing everything that it can.

"Midnight Traveler" is screening at select theaters around the country.

David Erlich is IndieWire's Senior Film Critic and Chief New York Rangers Fan. He obviously lives in Brooklyn, and can pretty much always be found on Twitter at @davidehrlich.