We Were Told Capitalism Had Won. But Now Workers Can Take Back Control

Class politics is reemerging in response to the huge inequality caused by the 2008 crash.

October 2, 2019 Grace Blakeley The Guardian
Printer friendly
We Were Told Capitalism Had Won. But Now Workers Can Take Back Control Published October 2, 2019 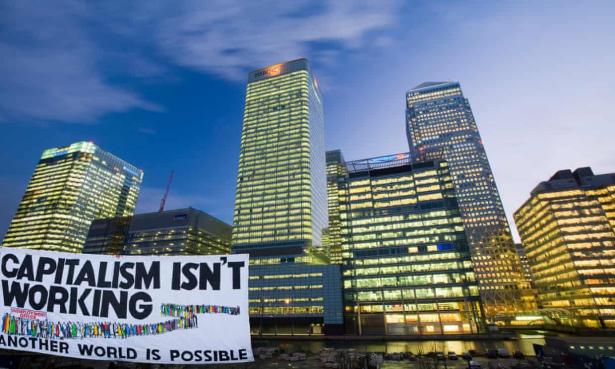 ‘The economic malaise we have experienced since the 2008 crash – characterised by stagnant wages, falling investment, rising consumer debt – simply represents a deepening of trends visible before it.’ ,Photograph: Ashley Cooper pics/Alamy

Before the financial crisis of 2008 it was widely assumed class politics was dead. A rising tide, we were told, would lift all boats. In fact, unprecedented levels of credit creation and rising asset prices obscured the growing gap between the 1% and the rest. Now the bubble has burst, it is obvious whose interests are served by our economic model – and the class divides are sharpening once again.

In 1992, Francis Fukuyama declared that history had ended, and capitalism was the last man standing. Margaret Thatcher had already stated that “there is no alternative” to the free market. The world fell under the spell of what Mark Fisher termed “capitalist realism” – it had become easier for most people to imagine the end of the world than the end of capitalism.

Yet this year, three decades on, the Economist devoted a cover story to an analysis of a concerning new trend: the rise of millennial socialism. All over the world, young people were turning out in droves to vote for politicians who had spent their lives railing against the evils of the free market system. Suddenly, socialism was cool again. What had happened to the end of history?

The driving force of historical development under capitalism is conflict between different classes – and for a while class politics seemed to disappear. During the 1990s, sociologists, economists and politicians all claimed the traditional class boundaries had been blurred by the expansion of property ownership and the redistributive state, and the rise of white-collar occupations. Karl Marx, in other words, had been wrong.

But class politics has returned with a vengeance since 2008. In 2017, the Economist again conceded: “Marx has a lot to teach today’s politicians.” Decried as populists by many of the liberals who remain rooted in the 90s, politicians who identify the fundamental antagonism that exists between the many and the few – between those who live off work and those who live off wealth – have fared remarkably well in recent years.

History did not end along with the fall of the Berlin Wall – a point Fukuyama now concedes – because class politics didn’t end. In fact, the class nature of capitalism was sharpened by the birth of a new model of growth that had its roots in the rise of neoliberalism in the 1980s. Thatcher removed restrictions on capital mobility, deregulated the City, demutualised building societies and privatised the nation’s collective wealth. Deregulated banks issued unprecedented amounts of credit to consumers in the rich world.

Firms became obsessed with their share price and their standing in Wall Street and the City. The rise of “shareholder value” led to a decline in wages and long-term investment in favour of mergers and acquisitions, dividend payouts and share buybacks.

At the same time an avalanche of cheap credit coupled with a consumer boom driven by a new wave of globalisation helped to blur the increasing divisions between the haves and the have-nots. Rising house prices made many consumers feel wealthier.

Rather than attempting to constrain the influence of finance over the rest of the economy, the state actively encouraged these developments. The rise of private financing and public-private partnerships signified the incursion of the logic of finance into the public sector.

This inherently unsustainable system collapsed in 2008. The economic malaise we have experienced since the crash – characterised by stagnant wages, falling investment, the growth of international monopolies, rising consumer debt and huge increases in inequality – simply represents a deepening of trends visible before it.

Today, the promise of the bubble years has dissipated entirely, and most people are growing accustomed to the fact that their lot is not going to improve. Young people – working longer hours, for lower pay – have lost faith in the system entirely. Millennials are the first generation since 1800 set to be worse off than their parents.

The reemergence of class politics is not a fad; it is a response to the material conditions created by the collapse of finance-led growth. After a recession caused by the reckless greed of the few was followed by an austerity programme that sought to impose the clean-up costs on the many, it is more obvious than ever that the wealth and power of the elite comes at the expense of everyone else. Or, to paraphrase Bernie Sanders, there has been a class war in this country for a long time – it’s time the working class won it.

In this new political context, economic policy is no longer a question of tinkering around the edges of a stable model: economic policy today is about power. As I argue in my new book, this is the moment for working people to seize back control of our most important institutions and rebalance power away from capital and towards labour.

The only way to bring about such a shift is to promote state, worker and community ownership of society’s most important resources. In an economy in which ownership is mediated by the finance sector, this requires a socialist government to take on the banks the way Thatcher took on the unions.

Finance-led growth emerged because its advocates used their control over the state to smash the organised power of working people and convince them that capitalism had won, once and for all. As the finance sector became ever more powerful, and the alternatives to capitalism faded further from view, it became extremely difficult to believe that there could be another way to organise the economy. Today, the greatest challenge for the left is to remind people that history isn’t over, that capitalism hasn’t won, and that we still have the power to change the world.

• Grace Blakeley is economics commentator at the New Statesman and author of Stolen: How to Save the World From Financialisation