Mark Rogovin was an artist and social activist who created outdoor murals and taught mural painting to young people while also being active in various political campaigns and movements. 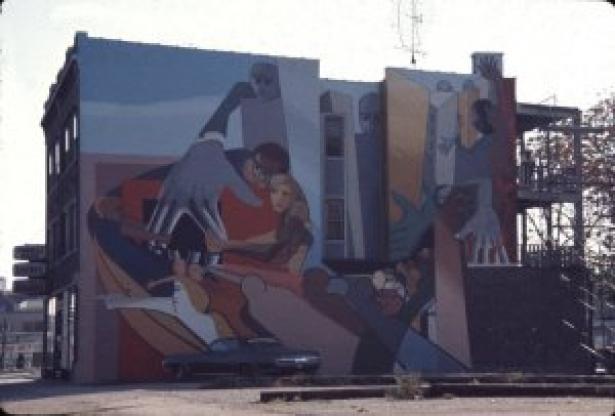 Mark Rogovin was an artist and social activist who created outdoor murals and taught mural painting to young people while also being active in various political campaigns and movements.

Rogovin was the founder and director of the Public Art Workshop in the 1970s, which promoted public art, and also a co-founder of the Peace Museum in Chicago, which opened in 1981.

Rogovin, 73, died Sept. 30 in his Forest Park home of complications of frontotemporal dementia, according to Michelle Melin-Rogovin, his wife of 26 years.

Rogovin grew up in Buffalo, New York. His father, Milton, was an optometrist and photographer who focused on social justice issues and whose work is part of the documentary photography collections of the Library of Congress, the J. Paul Getty Museum and the Center for Creative Photography, among other institutions.

Recently, Mark Rogovin served as the head of the Rogovin Collection promoting the educational use of his father’s documentary photography and produced films on his father's work, “Picture Man” and “Be Filled with the Spirit.”

Rogovin earned a bachelor’s degree in fine art from the Rhode Island School of Design in 1968. Soon after, he came to Chicago to pursue a master’s degree from the School of the Art Institute.

“Mark had a robust art background, even in high school,” his wife said.

He came to know Mexican artists and art through his parents. During his time at Rhode Island, he had an opportunity to work in Mexico City as part of a team working with famed Mexican muralist David Alfaro Siqueiros. 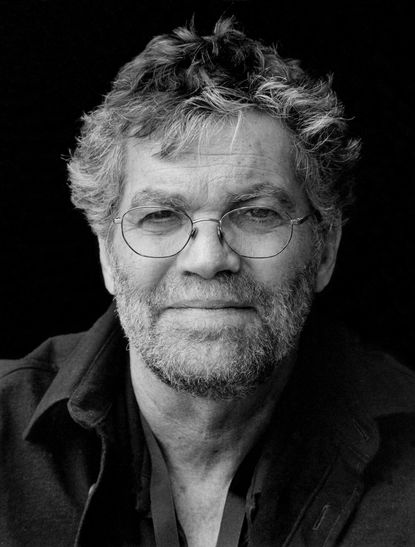 “Mark was the most talented of Siqueiros’ disciples in the U.S.,” said muralist John Weber.

Rogovin’s exposure to Mexican artists turned him to an interest in public art "so that people could experience art without going to a museum,” his wife said.

In early 1971, Rogovin, Weber and two other artists had the opportunity to produce indoor murals in the Museum of Contemporary Art Chicago, then on East Ontario Street, Weber said. The idea was for the artists to work on the lower level of the building in a space where visitors could watch art being made.

“Mark was a terrific negotiator,” Weber said. He got the artists a small fee, but also secured top-notch materials for their work and eventually published artists’ statements in which they could discuss their work. Although the art in that instance was produced indoors, the focus was always on the outdoor urban mural movement, Weber said.

Rogovin’s work at the time was what Weber called a “portable” mural, a movable piece on the theme of freeing political activist Angela Davis.

Weber believes all of Rogovin’s outdoor murals are now gone. He said one of Rogovin’s best was on West Madison Street and titled “Break the Grip of the Absentee Landlord.”

Eventually, Rogovin turned from mural painting to help found the Peace Museum, which operated from about 1981 to 2007. For the museum, he helped create exhibits including "Unforgettable Fire,” on the impact of the nuclear bomb in Hiroshima and Nagasaki, and “Give Peace a Chance,” featuring the songs of folk and rock musicians.

In 1997, he helped organize a nationwide movement to celebrate the centennial of actor, singerand activist Paul Robeson and co-authored “Paul Robeson: Rediscovered,” his wife said.

Along the way, he worked on political campaigns and was especially proud to help elect Harold Washington mayor in Chicago. He could always be counted on to produce political buttons or banners for any progressive movement or campaign.

Jerri Zbiral, who met Rogovin at the Public Art Workshop in 1975, compared Rogovin to another local artist, Peggy Lipschutz, who died in September, calling them comrades in arms in their activism and devotion to progressive political causes.

“I certainly admired his devotion to principles of social justice," Weber said.

In addition to his wife, Rogovin is also survived by sisters Paula Rogovin and Ellen Rogovin Hart.

Plans for a memorial are pending.

Graydon Megan is a freelance reporter. 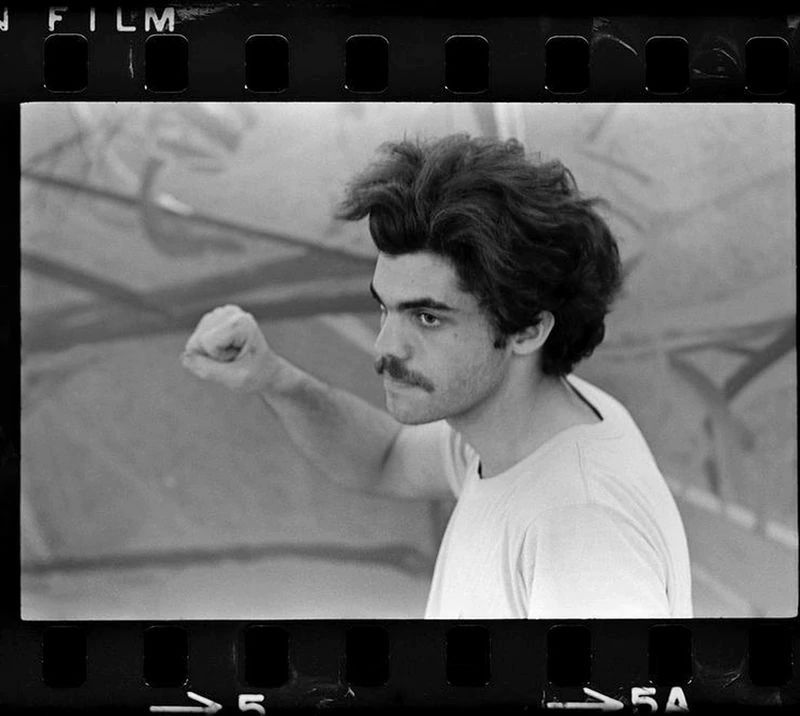 Mark was born in Buffalo, New York, the second of three children born to Anne and Milton Rogovin. Sandwiched between two sisters, Ellen and Paula, Mark became a loyal protector of those he loved from an early age. His fierce love for his family, and his 26-year wife and partner Michelle never waned.

Mark Rogovin received a BFA degree from the Rhode Island School of Design in 1968. Rogovin was an assistant to the great Mexican muralist David Alfaro Siqueiros on his last mural, the March of Humanity. From Mexico, he enrolled in graduate school at the Art Institute of Chicago.

A Chicago resident for more than 50 years, Mark brought his artistic vision to the west side of Chicago, when in 1972 he founded the Public Art Workshop, a community art and mural center, and co-authored the book, Mural Manual. To this day, the young men and women who made the Public Art Workshop home, learning photography, mural painting, and other visual arts remain a part of Mark’s life.

In 1981 Mark co-founded the Peace Museum and was its director for four years. Shows that he helped create included Unforgettable Fire, incredible drawings and paintings by survivors of the 1945 U.S. atomic bombing of the cities Hiroshima and Nagasaki, Japan. He also helped create “Give Peace A Chance” featuring the songs of folk and rock musicians.

Mark worked for a dozen years or more at La Rabida Children’s Hospital on the south side of Chicago, adding murals and other stimulating play spaces for children hospitalized for many months. He was also an avid carpenter and built sturdy office furniture.

In 1997, Mark helped organize a nationwide movement to celebrate the centennial of actor, singer, and activist Paul Robeson and co-authored, Paul Robeson: Rediscovered. Rogovin and Dr. Margaret Burroughs, founder of Chicago’s DuSable Museum of African American History and a friend of Robeson, organized a campaign that resulted in the Paul Robeson postage stamp in 2003.

Most recently Mark Rogovin served as the head of the Rogovin Collection with a mission to promote the educational use of the documentary photography of his late father, Milton Rogovin. Mark produced films on his father’s photography, Picture Man and Be Filled With the Spirit.

A social activist and citizen historian, Mark honored labor history in Illinois and throughout the world through his life of service as a caretaker to the Haymarket Martyrs Monument in Forest Home Cemetery (on the register of National Historic places). He was also active with the Illinois Labor History Society and co-authored the publication The Day Will Come: Stories of the Haymarket Martyrs and the Men and Women Buried Alongside the Monument.

Mark worked throughout his life on key campaigns and movements: the Committee to Save Lives in Chile (after the horrific 1973 coup by Pinochet against Allende’s Popular Unity Government), solidarity in the struggles against apartheid in South Africa, and for the freedom of Nelson Mandela. He was devoted to freeing political prisoners, especially Angela Davis. Over the years he helped build street theater props, parade floats, made buttons and hundreds of posters, signs, and banners for these movements. He loved working on political campaigns and was especially proud to have helped elect Harold Washington Mayor in Chicago.

Mark loved the natural world and the people he encountered everywhere who brought joy and creativity to his life. Mark has a large “family” of friends in this respect as well.

Mark was a dedicated and loving husband to Michelle, loving brother to Ellen Hart and Paula Rogovin, and a dedicated uncle to Malaika (Ewan), Aliya, David, Steven (Raquel) and Eric (Robyn). He cared deeply for his grandnieces and nephews Makayla, Hoshea, Yacob, Benjamin, Elijah, Nahla, and Madison.

The family will be providing more information about a memorial service.

Mark’s widow, Michelle Melin-Rogovin suggested the best way to remember Mark is “by taking time to help their fellow neighbor. Donate food. Say hello and take a genuine interest in others. Volunteer to lend a hand before being asked. Feed the birds. Plant a garden. Share what you have with someone who has less. Get involved in your community to make the world a better place. Make sure those you love know you love them, and be a part of their lives. If you’ve done this, you’ve remembered him well.”

The family suggests a charitable donation to Northwestern University Clinical and Translational Sciences Institute at the Feinberg School of Medicine – to support pilot studies into neurodegenerative diseases and advance new directions in frontotemporal dementia research in particular. By mail: c/o Northwestern University Feinberg School of Medicine, 420 E. Superior Street, 9th Floor, Chicago, IL 60611 or feinberg.northwestern.edu/giving. If friends and family wish to make a credit card donation by phone, they may do so by calling 312-503-8933, and reference Mark Rogovin when you call.

There are plans for memorials to be announced at a later date.

People’s World is a voice for progressive change and socialism in the United States. It provides news and analysis of, by, and for the labor and democratic movements to our readers across the country and around the world. People’s World traces its lineage to the Daily Worker newspaper, founded by communists, socialists, union members, and other activists in Chicago in 1924.