The Ghost of Jimmy Hoffa Won’t Go Away 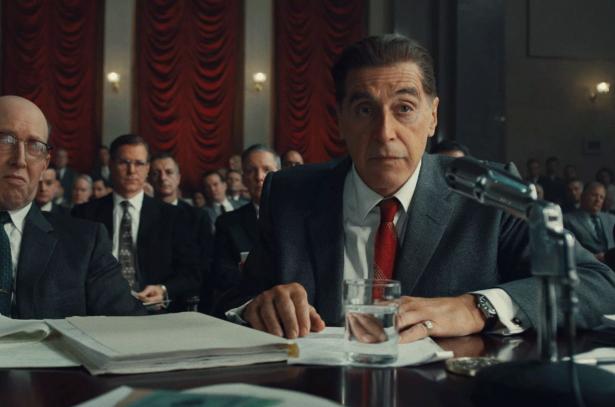 When I was working with the Teamster reform movement forty years ago, truck drivers concerned about union corruption had to proceed warily. In the late 1970s, too many affiliates of the International Brotherhood of Teamsters (IBT) were run by grifters or autocrats of the usual business union sort. If you crossed them, the result might be collusion with management to get you fired and then blacklisted.

In other locals and joint councils, located in areas of organized crime strength, some Teamster officials were actual associates of the mob. Their reputation for violent retaliation against union rebels who dared to challenge Teamster corruption and racketeering was even more intimidating.

Sheeran was once little-known outside of Teamster circles. But then former prosecutor Charles Brandt published a book about his close relationship with Teamster president James R. Hoffa, linking Sheeran to America’s most famous cold case, the disappearance and presumed murder of Hoffa in 1975.

Titled I Heard You Paint Houses, Brandt’s biography was optioned by director Martin Scorsese, who has now made The Irishman, Hollywood’s third major film about Hoffa and the Teamsters, opening in theaters on November 1 and on Netflix later in the month.

The two earlier Hoffa films were F.I.S.T., a lightly fictionalized account of his career starring Sylvester Stallone, and Hoffa, a 1992 production featuring Jack Nicholson in the title role. Both did well at the box office, while recycling Hoffa’s own factually challenged explanation for Teamster-mob connections — namely, that workers needed organized crime muscle to overcome management violence against them during organizing drives.

The Irishman has a similar Teamster history narrative. It’s already being hailed by reviewers as a “majestic mob epic” and a candidate for multiple Oscars. According  to the New York Times, Scorsese’s latest is “long and dark: long like a novel by Dostoyevsky or Dreiser, dark like a painting by Rembrandt.” The Atlantic calls the $160 million film “a ruminative and rueful viewing experience . . . an attempt to understand a man who lived in the background of history while apparently having significant influence over it.”

With Al Pacino playing Hoffa and Robert De Niro in the role of Sheeran, the latter is about to become a far better-known US labor figure. I first learned more about Sheeran during a furtive 1977 meeting with two Teamsters who belonged to Local 326 in Wilmington, Delaware. A decade earlier, Hoffa had personally installed Sheeran as president of this 3,000-member local to reward him for helping the IBT maintain control over Teamsters Local 107 in Philadelphia.

During the late 1950s and early 1960s, many truck drivers in Philly opposed Hoffa’s heavy-handed rule. After the IBT was expelled from the AFL-CIO for corruption in 1957, thousands of them tried to replace the Teamsters with a federation-backed union but failed to win a decertification election.

In Sheeran’s view, this challenge to Hoffa was tantamount to treason. “Once you allow dissension and rebel factions to exist, you are on the way to losing your union,” he told his biographer. “You can have only one boss. You can have helpers. But you can’t have nine guys trying to run a local. If you did, the employer would make side deals and split the union.”

As the Local 326 dissidents I met with confirmed, Sheeran was quite adept at making “side deals” himself, as the “boss” of Local 326. Like many other members of the Professional Drivers Council (PROD) and the Teamsters for a Democratic Union (TDU), those dissidents sought legal help and organizing advice about reforming the union and ridding it of crooks and gangsters. They suspected, rightly as it turned out, that Sheeran was on the take.

For example, as Sheeran later confessed to Brandt, he liked to grant “waivers” to newly organized trucking companies so they could avoid making pension fund payments normally required under a first contract. This enabled a friendly employer “to put his savings on the table [so] you both share it under the table — and everybody’s taken care of that way.”

By 1977, thanks to driver complaints, related lawsuits, and investigative reporting by the Wall Street Journal, we also knew that Sheeran was negotiating sweetheart contracts that undercut the Teamsters’ National Master Freight Agreement (NMFA) in a much more damaging fashion.

The NMFA was, at the time, one of the biggest industry-wide union contracts in the country, covering 450,000 Teamsters, including members of Local 326. Its signatories included both interstate freight haulers, then-regulated as common carriers, and “private carriers” as well.

A private carrier was a retail store chain or manufacturer with a sufficiently high volume of shipping to employ Teamster drivers directly and maintain its own fleet of trucks. Rather than try to keep these employers under the NMFA, some Teamster locals like Sheeran’s encouraged them to use a labor broker named Eugene Boffa Sr.

Boffa and his son owned labor leasing firms that supplied drivers for big companies like Avon Products, Iowa Beef, Continental Can, Crown Zellerbach, and J. C. Penney. Boffa’s contracts with Local 326 and other Teamster affiliates allowed him to provide pay and benefits far below NMFA standards and shed Teamster drivers as direct employees. At Iowa Beef, then the nation’s largest meat-packer, a cut-rate agreement between Boffa and the Teamsters required no pension fund contributions at all and paid drivers 70 percent less than the NMFA rate.

Outsourcing appealed to Teamster employers forty years ago for the same reason that management likes “flexible hiring” arrangements today. As Journal reporter Jonathan Kwitny wrote, “workers regarded by the company as troublesome can be dumped regardless of legal justification. And a company that hires Mr. Boffa can expect freedom from grievances, picket lines, and bothersome Teamster business agents.”

When Teamster drivers protested this lack of representation, the vocal ones, like PROD member Don Harper, got fired. “These two companies framed me because I was a shop steward,” Harper told me. “I was only doing my job trying to get them to honor our contract.”

Sheeran, meanwhile, was riding high in a Boffa-supplied Lincoln Continental and enjoying a plethora of other perks. His longtime mob godfather Russell Bufalino also benefited from being “connected with the two major labor leasing companies that had been allowed by the union to prosper,” according to Steven Brill, author of a best-selling 1978 book called The Teamsters. As Boffa told the Wall Street Journal: “I am not averse to doing people favors.”

PROD tried to blow the whistle on Boffa, Sheeran, and Bufalino in our national rank-and-file newspaper read by thousands of Teamsters. “IBT Freight Workers Sold Out by Deals with Labor Broker,” our front page headline screamed. While reform candidates backed by PROD or TDU (which later merged) were able to oust incumbents in other locals, Frank Sheeran was forced out only after being convicted of labor racketeering, mail fraud, obstruction of justice, and taking bribes from an employer.

At age sixty-one, Sheeran’s prior luck — he beat two labor-related manslaughter raps — had clearly run out. He was sentenced to thirty-two years in federal prison. Bufalino, the Pennsylvania Mafia don played by Joe Pesci in The Irishman, also spent his dotage in jail after being convicted of extortion and conspiracy to murder. As recounted in the movie, Hoffa’s own thirteen-year sentence for jury tampering and pension fund fraud was cut in half by Republican President Richard Nixon, in return for Teamster political backing (before Nixon left office in disgrace over Watergate).

During most of Hoffa’s time in federal prison, he remained Teamster president, while also collecting salaries for four lesser union positions. When he finally retired as part of his White House commutation deal, he cashed out of the Teamster officers’ pension plan with a lump sum of $1.7 million (in 1971 dollars!). Teamster dues money was also spent on the enormous cost of defending him in multiple criminal cases. As a Teamster retiree, out on parole, Hoffa immediately began plotting his return to power — a fatal move because his longtime mob allies were not in favor of it.

Meanwhile, Hoffa’s major collective bargaining achievement, the National Master Freight Agreement, was on the road to ruin. Today, it covers only fifty thousand drivers and loading dock workers. Deregulation of interstate trucking by President Jimmy Carter did far more damage to the NMFA than any corrupt scheming by Teamster locals that became “mobbed up” with Hoffa’s help during his rise to power or under his presidency. But Sheeran-style “sweetheart contracts” definitely helped undermine freight industry labor standards.

Hoffa also created a top-down union structure that still concentrates enormous power and privilege in the hands of the Teamster president. That man is now Hoffa’s son, a seventy-eight-year-old union lawyer from Detroit, who makes about $400,000 a year. Last fall, he decreed that national contracts covering 260,000 UPS workers were ratified even though a majority of the members voting on them rejected the unpopular settlement he negotiated.

TDU members have jousted with “Junior Hoffa” for much of his twenty years in office, in many other bargaining situations where IBT leaders similarly failed to mount an effective contract campaign, thwarted strike action, and then “settled short.” Says TDU cofounder and former national organizer Ken Paff: “The idea that the Teamsters belongs more to the top officials than its working members is a legacy of the mob era that we continue to struggle against today.”

The deadly feuds and personal betrayals recounted in Scorsese’s three-and-a-half-hour film took place during the union’s scandal-scarred heyday, when Teamster clout could have been used for many good purposes, like improving truck driver safety.

Once again, Hollywood fails to show how Teamster members were the most betrayed in that era — by lax contract enforcement, frequent violations of the Landrum-Griffin Act, outlandish Central States Pension Fund fraud, the looting of local union treasuries, and corrupt but perfectly legal practices that persist to this very day (like Hoffa’s awarding of multiple salaries to already overpaid, full-time Teamster officials to secure their political support).

Also missing from The Irishman is any hint that threats, intimidation, and physical violence failed to deter the development of a Teamster reform movement, which is still alive and kicking today. That singular organizational achievement will be on display in Chicago, November 1–3, when several hundred leaders and activists from TDU chapters around the country gather for their 44th annual strategy session on union democracy and reform struggles in the IBT.

In 1996, a low-budget independent film called Mother Trucker: The Diana Kilmury Story showed what it was like to be part of this brave rebel band during TDU’s early years, when repression by the Teamster officialdom was particularly intense. Democratic Socialists of America member Dan La Botz’s 1990 book, Rank-and-File Rebellion covers much of the same historical terrain, as does his essay in Rebel Rank and File: Labor Militancy and Revolt from Below During the Long 1970s.

Forty years ago, most Teamsters cared far more about their own working conditions and union representation than who killed Jimmy Hoffa in a mob plot to prevent his political comeback. The same is true today, when the only Hoffa most Teamsters know about is his son.

Nevertheless, that unsolved mystery has long been a subject of mass media fascination and looms large again in The Irishman. Viewers should remember that the mob influence, once present in America’s largest private sector union, manifested itself in far more ways than a former leader’s disappearance. And it was always most malign in its impact on rank-and-file Teamsters, who then and now, needed leaders they could trust and a labor organization they could control.

Steve Early was a Boston-based organizer for the Communications Workers of America for twenty-seven years. He is the author of Embedded With Organized Labor: Journalistic Reflections on the Class War at Home and The Civil Wars in U.S. Labor.

Jacobin is a leading voice of the American left, offering socialist perspectives on politics, economics, and culture. If you like this article, please subscribe or donate.