The Enduring Power of Anticapitalism in American Politics

From Debs to Sanders to Ocasio-Cortez, an ideal persists. If Sanders actually makes it to the White House, then he’ll be able to continue this work from the summit of American politics. If he doesn’t, then unlike Debs, he’ll have a natural successor. 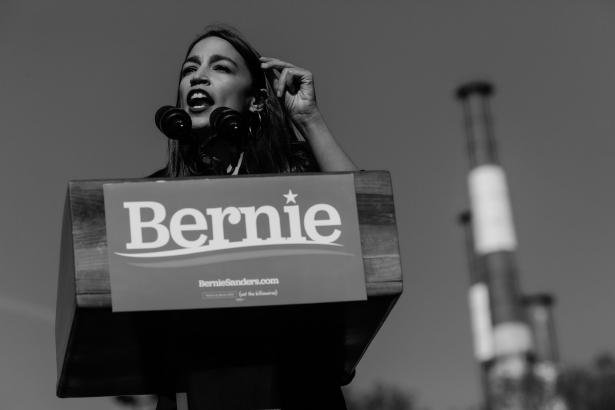 Representative Alexandria Ocasio-Cortez at the rally for Bernie Sanders., Christopher Lee for The New York Times

Bernie Sanders is a longtime admirer of Eugene Debs, the labor organizer and political radical who pioneered a distinctly American socialism in the first decades of the 20th century. Before Sanders, Debs was the most successful socialist candidate in American history, winning hundreds of thousands of votes in the final four of his five campaigns for president. He won 6 percent of the national popular vote in 1912, the equivalent, in 2016 numbers, of more than eight million votes

Debs was best known for his thundering attacks on industrial capitalism. A tireless campaigner, he crisscrossed the country denouncing the inhumane conditions of factory labor and berating the capitalist class for its destructive obsession with profit. “In the wage system you and your children, and your children’s children, if capitalism shall prevail until they are born, are condemned to slavery and there is no possible hope unless by throwing over the capitalists and voting for socialism,” Debs declared in a speech delivered at an Independence Day celebration in Chicago in 1901.

But Debs didn’t just condemn his class enemies. He also called on his audiences to imagine a better world — to realize the democratic and egalitarian promise of the American Revolution through collective action. “We live in the most favored land beneath the unbending sky,” he said in a speech in 1900. “We have all the raw materials and the most marvelous machinery, millions of eager inhabitants seeking employment. Nothing is so easily produced as wealth, and no man should suffer for the need of it.” Debs’s appeal, noted the historian Nick Salvatore in his 1982 biography, “Eugene V. Debs: Citizen and Socialist,” was “frequently described by contemporaries as evangelical, and transcended at that moment factional disagreements and led each in the audience to glimpse a different social order.”

Or, as one self-described “hard-bitten socialist” said to the journalist Heywood Broun at the time: “That old man with the burning eyes actually believes that there can be such a thing as the brotherhood of man. And that’s not the funniest part of it. As long as he’s around, I believe it myself.”

I mention all of this because I saw something of that Debs during Sanders’s Saturday rally in Queens, N.Y., where 25,000 people gathered to hear Sanders and many of his most high-profile supporters, including Representative Alexandria Ocasio-Cortez. It was a show of force for Sanders, who was recently hospitalized following a heart attack.

The highlight of the event was a heartfelt endorsement from Ocasio-Cortez, who credited Sanders for her political awakening while she was working as a bartender. “It wasn’t until I heard of a man by the name of Bernie Sanders that I began to question and assert and recognize my inherent value as a human being who deserves health care, housing, education and a living wage,” Ocasio-Cortez said, very much echoing the sentiment of those stirred to politics by Debs.

Sanders gave a speech, too. Most of it was familiar. He spoke on housing and homelessness, called for universal health care and free college education, blasted mass incarceration and an unequal criminal justice system and condemned “the 1 percent” for its greed and selfishness. But the part that stood out — his “Debsian moment,” so to speak — came at the end, when he closed the rally with a call for solidarity.

“I want you all to take a look around and find someone you don’t know. Maybe somebody who doesn’t look like you, maybe somebody who might be a different religion than you, maybe they came from a different country,” Sanders said. “My question now to you is are you willing to fight for that person who you don’t even know as much as you’re willing to fight for yourself?” He went on:

It is striking to see this distinctly moral language coming from a presidential campaign. And I would have jumped to Debs as an analogy regardless of Sanders’s own connection to the socialist pioneer, which includes a short documentary on Debs as well as a spoken-word album.

As it stands, the fact of Sanders’s admiration makes the connection even more striking. In his epilogue, Salvatore notes how for many Americans of the era, Debs “symbolized his generation’s protest against industrial capitalism. His personal qualities assumed political importance and his agitation touched the hearts and affected the lives of real people.” Bernie Sanders has done something similar. His campaigns have given a generation of people a language and framework for understanding the political, economic and ecological threats to American democracy, as well as articulating an alternative vision for the country.

Ocasio-Cortez is, again, emblematic. “We need to build a mass movement, centered on the working class, the poor, the middle class, one that is actively anti-racist, that is rooted in principles of universality,” she said in her endorsement. “Everybody has a right to health care, everybody has a right to an education.”

If Sanders actually makes it to the White House, then he’ll be able to continue this work from the summit of American politics. If he doesn’t, then unlike Debs, he’ll have a natural successor. And the deafening applause for Ocasio-Cortez at the rally is a glimpse of what that future might look like.

[Jamelle Bouie is based in Charlottesville, Va., and Washington, and became a New York Times Opinion columnist in 2019. Before that he was the chief political correspondent for Slate magazine. Mr. Bouie, who is a political analyst for CBS News, has been a staff writer at The Daily Beast and has held fellowships at The American Prospect and The Nation magazine. You can follow him on Twitter.