Slavery’s Lessons for the Supreme Court and the DACA case

The DACA case involves some legal uncertainty. And while there are obvious differences between slavery and deportation, the way antebellum courts in free states thought about the security of their brown-skinned residents is instructive. 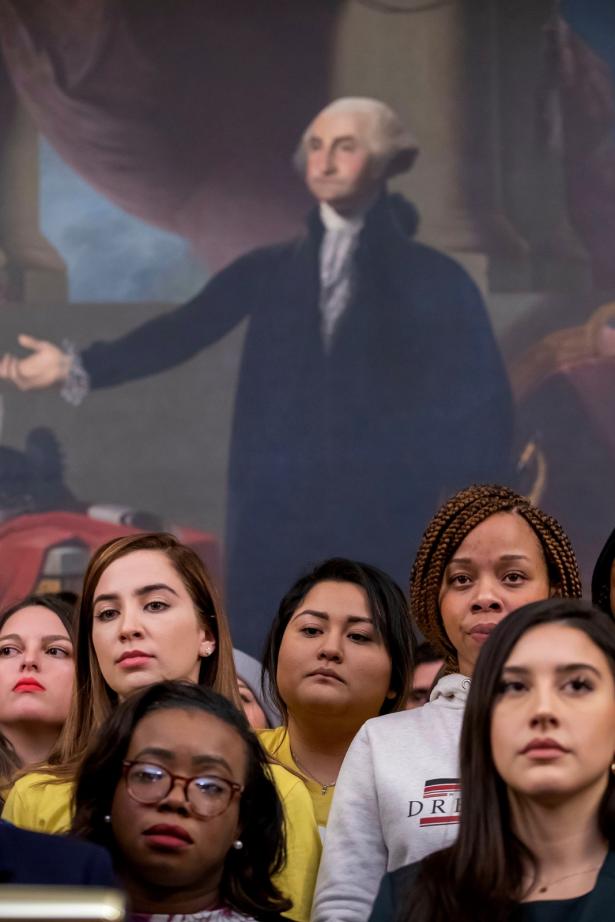 “Dreamers” attend a news conference on the DACA case at the US Capitol., Erik S. LesserEPA/Shutterstock

The Morgan children were in their pajamas, probably dreaming, when four men broke into their home before daylight, loaded them into the back of an open wagon and forcibly took them across Pennsylvania’s southern border. The year was 1837.

The men were working with a slave catcher named Edward Prigg who had come for their mother, Margaret, claiming she was an escaped slave belonging to a woman named Margaret Ashmore, who lived in Harford County, Md. The children had never been slaves. At least one was born in York County, Pa., and the others had left Maryland at a young age. All they knew was freedom.

Margaret Morgan probably hadn’t escaped. She had lived as a free person in the home of her former master, since deceased, and so she and her children should have been free. Prigg was eventually convicted in Pennsylvania under state law for kidnapping Morgan and her children, and he appealed to the Supreme Court.

In Prigg vs. Pennsylvania, the court declared Prigg a free man and ruled that the Fugitive Slave Clause of the Constitution superseded state laws and permitted slave catchers to seize people based on a slave owner’s personal belief that someone was an escaped slave. It was simply the law, Justice Joseph Story wrote in the majority opinion.

In our times, more than a million undocumented immigrant children have lived in fear of suffering a fate eerily similar to that of the Morgan children: having armed men barge in at any time to ship them south, to misery or worse. In 2012, the Obama administration issued the Deferred Action for Childhood Arrivals memorandum shielding roughly 700,000 “Dreamers” from deportation. These were children who had been brought to the U.S. at a young age and stayed in school or served in our armed forces. As young workers in the economy, they have contributed a net $3.4 billion in taxes to the federal government every year. Like the Morgan children, all the Dreamers know is free soil.

On Tuesday, the Supreme Court heard arguments on whether President Trump’s Department of Homeland Security acted lawfully when it rescinded DACA in 2017. While there are obvious differences between slavery and deportation, the way antebellum courts in free states thought about the security of their brown-skinned residents is instructive.

We sometimes characterize the law as a clear set of rules, but the law isn’t always so straightforward. In the Prigg case, the Supreme Court said the Fugitive Slave Clause overrode Pennsylvania’s Personal Liberty Law, which required a slave catcher like Prigg to appear before a local magistrate to seek a warrant and present his claim that someone was indeed a fugitive, instead of just kidnapping people. While providing due process to black and brown people might pose an obstacle to the recapture of escaped slaves, nothing in the text of the clause directly authorizes extralegal seizure and rendition.

In blessing private action to capture and return suspected fugitive slaves, the Supreme Court put a bounty on every black or brown person in the country, free or not, adult or child. Justice Story was personally opposed to slavery, but he was too willing to ignore the manifest injustice of his decision. The legal philosopher Ronald Dworkin once wrote that it’s natural for legal interpretation to aim at just outcomes, what he called “happy endings.” Judges must obey the law, but for a good judge faced with profound legal uncertainty, the tie should go to justice.

The law of slavery was lousy with uncertainties of this sort. For years, it was unclear in many states, for example, whether someone deemed a fugitive slave was entitled to a jury trial or whether a slave temporarily brought into a free state was thereby emancipated. An 1836 Massachusetts case involved a Louisiana woman who took a 6-year-old slave girl, Med, with her on a visit to the woman’s sick father in Boston. Many Southern courts held that principles of interstate comity meant that someone like Med remained a slave unless her master took up permanent residence in a free state. But Chief Justice Lemuel Shaw of Massachusetts disagreed and ruled that the abolition of slavery there meant that enslaved people brought into the state could sue for their freedom.

As in the antebellum years, states are now following largely regional and partisan lines in the battle over the protections due to their young, brown-skinned residents. Twenty-four states, two governors and the District of Columbia filed briefs in the Supreme Court arguing that Dreamers must be permitted to remain free in our communities and with their families. Twelve states and the governor of Mississippi filed briefs opposing the Dreamers and arguing that DACA is an illegal exercise of executive power.

As this division highlights, the DACA case involves some legal uncertainty. A court should hesitate before depriving an administration of the power to repeal prior discretionary policies such as DACA. Still, the law requires agencies such as the Department of Homeland Security to engage in reasoned decision-making. Here, the agency repealed DACA under the mistaken assumption that the program was illegal. For that reason, over the last two years, nearly every federal court considering the rescission has ruled against the Trump administration.

The Supreme Court would do well to follow Chief Justice Shaw’s example rather than Justice Story’s. It is no exaggeration to say the Prigg decision was the court’s darkest hour. Prigg eventually sold the Morgans south into slavery, where they were lost to history. We don’t even know the children’s names.

Undocumented immigrants are among the most vulnerable members of society. For Dreamers, America is the only home they know. For the Supreme Court to let them be “sent south” needlessly would be nothing short of a nightmare.