Benjamin Netanyahu called corruption charges filed against him "an attempted coup" against an acting prime minister, the process is meant to topple him. Saying he 'will not let lies prevail,' calls to 'investigate the investigators'. Sound familiar? 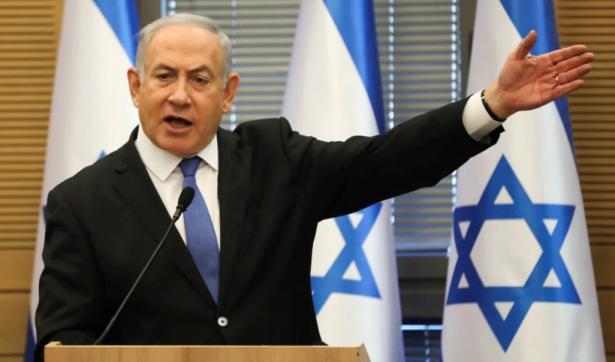 Prime Minister Benjamin Netanyahu on Thursday called the corruption charges filed against him "an attempted coup" against an acting prime minister, and that the process is meant to topple him.

Earlier Thursday, Attorney General Avichai Mendelblit announced he was indicting Netanyahu for bribery, fraud and breach of trust in three corruption cases, marking the first time an acting Israeli prime minister is charged with such offenses.

In a televised statement that was closed to the press, Netanyahu said that while he holds Israel's judicial authorities in high regard,  "you would have to be blind not to see that something bad is happening with the police and the prosecution, because tonight we are witnessing an attempted government coup against the prime minister through blood libels and a biased investigation process."

Netanyahu said the timing of the announcement, which he claimed was the most sensitive in the history Israeli politics, "highlights how much this decision is tainted by extraneous considerations, aiming to bring down a right-wing prime minister."

He alleged that the "tainted investigation process" against him included fabricating cases. "This process, which culminated today is appalling. I'm not the only one appalled. Many of Israel's citizens are also appalled, and not only who those who are right-wing."

In reference to Nir Hefetz, his former media adviser who turned state's evidence, the prime minister said: “They took Nir Hefetz and extorted him through threats, telling him [we will] 'destroy your family and strip you of all of your assets, and your children will never speak with you again.'"

Netanyahu added that the investigators "concealed the extortion from the attorney general and later imposed a gag order on it." 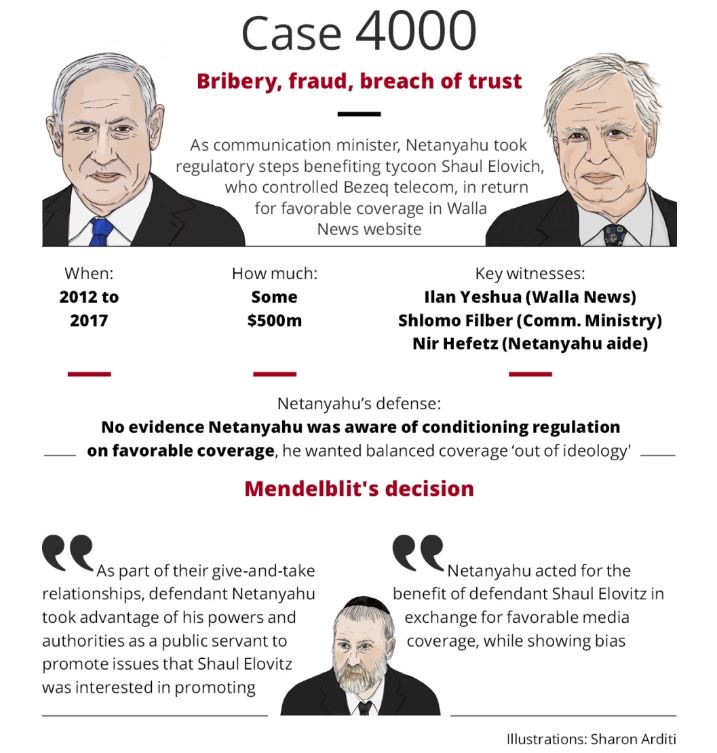 He called for "an independent committee to investigate this tactic and put an end to this. It's time to investigate the investigators, and the prosecution that authorizes these tainted investigations. I won't let lies prevail. I will continue leading this country, in accordance with the law, with devotion and seeing to the future and security of all of us." 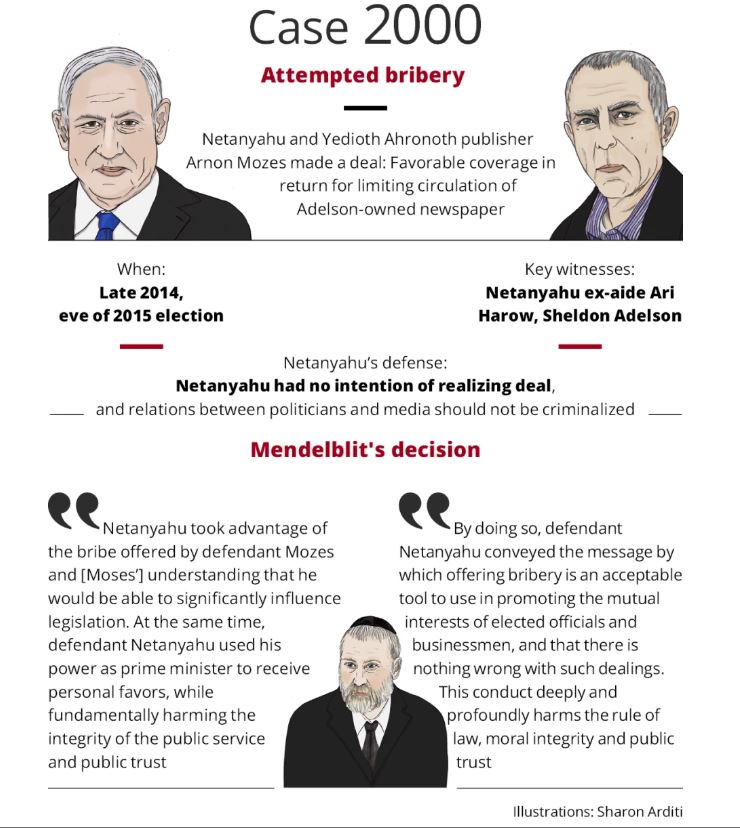 "I, as opposed to my rivals on the left, want to see a free market, a range of opinions in the media," he said. "I am a prime minister who believes in a strong Israel, and not in a weak and small country that bows down to others." 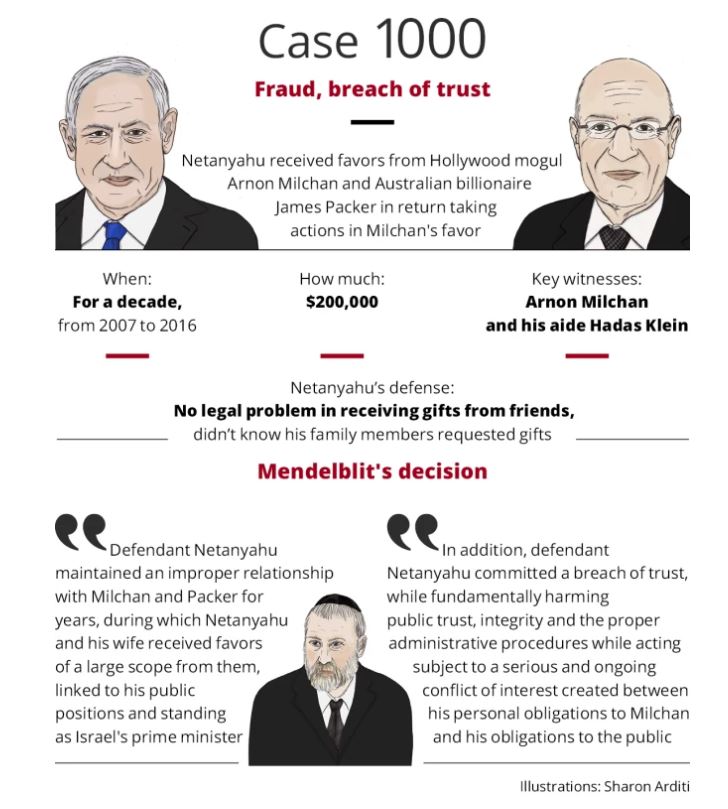 Earlier Thursday, Attorney General Avichai Mendelblit announced he was indicting Netanyahu for bribery, fraud and breach of trust in three corruption cases, marking the first time an acting Israeli prime minister is charged with such offenses.

The indictment comes after a four-day hearing with Netanyahu's defense team last month, followed by weeks of intensive discussion at the attorney general's offices.

Laying out the charges in a press conference, Mendelblit said he made the decision to indict the prime minister "with a heavy heart, but wholeheartedly," stressing it was not an issue of left-wing or right-wing politics and that enforcing the law is not a matter of choice.

The attorney general lamented that "while conducting a professional hearing process, we've witnessed repeated attempts to delegitimize the people who were involved" in the investigations. These people, he said, "acted out of proper motives."

The delegitimization "was meant to create the impression that any decision taken would be wrong. The investigations are based on a broad infrastructure of evidence and testimony, which were professionally reviewed. No stone was left unturned," the attorney general said.

After Netanyahu had delivered his statement, his political rival and Kahol Lavan Gantz said he has "complete confidence in the judicial system led by Attorney General Avichai Mendelblit. I'm sure they are doing their job with professionalism, integrity and loyalty.

"Israel is not undergoing a government coup, rather an entrenchment in power. Netanyahu has proven tonight that he must leave his post and focus on his legal woes. He too is aware of the major complex challenges Israel is facing both in the field of security and in socioeconomic matters, which require the full attention, strength and energy of a prime minister," Gantz said.

Former deputy army chief and Democratic Union lawmaker Yair Golan called on the legal adviser to the Knesset, Eyal Yinon and the attorney general to clarify whether a person charged with criminal offenses can be nominated by a majority of lawmakers as a candidate tasked to form a governing coalition.

Of the three cases, dubbed Cases 1000, 2000 and 4000, the latter is considered the gravest. It revolves around an alleged bribery deal between Netanyahu and businessman Shaul Elovich, who controlled the Bezeq telecommunications company and the Walla News site.

According to the indictment, Netanyahu and Elovich engaged in a quid-pro-pro deal in which Netanyahu – as communication minister – led regulatory steps directly tied to Elovich's businesses and interests that yielded the tycoon some $500 million.

At the center of Case 2000 is a series of meetings between Netanyahu and the publisher of Yedioth Ahronoth daily newspaper, Arnon Mozes, in which they allegedly discussed a bribery deal. According to the indictment, the deal called for Netanyahu to try to limit the circulation of rival newspaper Israel Hayom, and in return Mozes would give Netanyahu favorable coverage. In this case, Netanyahu is accused of fraud and breach of trust.

In Case 1000, Netanyahu is also accused of fraud and breach of trust over gifts he allegedly received from Hollywood Mogul Arnon Milchan and billionaire James Packer. According to the indictment, Netanyahu received cigars and champagne from the two over the course of several years. Netanyahu's family members, the indictment states, also demanded and received gifts from the businessmen, and Netanyahu was aware of this fact. Mendelblit writes in the indictment that Netanyahu put himself in a conflict of interests and used his public role to receive gifts.