theater "The Great Society" a Brilliant Play About America's Violence Against U.S. Blacks and the People of Vietnam

It could be a Shakespeare play, a tragedy that engulfs a complex, larger-than-life figure. And one who is brought down by his own hubris. The story moves between the civil rights movement and the American war against Vietnam. Closes Nov. 30. 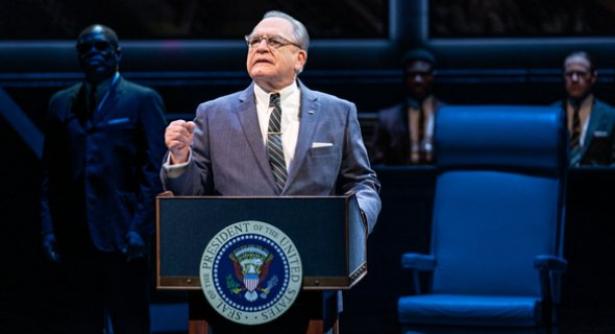 This is an amazing play. With Robert Schenkkan’s 2014 “All the Way,” first part of his Lyndon Johnson story, it is among the most important historic American plays.

It could be a Shakespeare play, a tragedy that engulfs a complex, larger-than-life figure. And one who is brought down by his own hubris. The story moves between the civil rights movement and the American war against Vietnam. And because I knew some of the characters, I have strong feelings about it.

It’s done in a way that tells the history as a dramatic story, the dialogue and events move you along, but it is as powerful and truthful as a documentary.

First, as Robert Schenkkan tells it, Lyndon Johnson was not as committed to civil rights as he appeared later. He seemed to care about the poor, albeit the white poor. Folks, backs bent, hands crabbed, who walked to get firewood — he brought them electricity. So, when he could act, he cared about education, Medicare, the right to vote, anti-poverty programs.

But he wanted to be elected in a segregationist South. And he understood how to deal with the politics, the South – swing votes were the Southern Democrats and Chicago Mayor Daley, and the equally corrupt black congressman Adam Powell, shown comically in his favorite Bimini with a Caribbean umbrella drink, who defeated an education bill, because he wanted $400G in a personal appropriation.

Of course, the real corruption was Johnson’s bad judgment/cowardice giving into the deep state on the war against Vietnam.

The play moves between those two major poles of the 60s, civil rights and Vietnam. The substance is so important that it is worth detailing. The major characters are all excellent in their roles.

LBJ (the superb Brian Cox) is not in favor of a push for voting rights. Martin Luther King (very fine Grantham Coleman) says: “Despite your promise, you are not prepared to even offer a voting rights bill.
LBJ  – right now –
MLK  – or provide us any meaningful protection while we demonstrate against policies which you yourself deplore, while simultaneously making us responsible for any violence that local authorities unleash on our non-violent demonstrators.”

He is told keep the pressure on. Don’t give them excuses.

King says “This is the South. They don’t need excuses.” And FBI provocateur Edgar Hoover continues to spy on him. To try to take him down.

Meanwhile, a Saigon coup is being plotted against a dictator too weak to carry out the plans of his American sponsor. And Johnson, arrogantly: “I don’t want to be the president who lost Asia.” When did the U.S. have Asia? Of course, this is reflection of American imperialism, the policy of a government which believes it should run the world.

Stokely Carmichael (I liked the insouciant Marchant Davis) in overalls, reports that LBJ won’t send people to Selma for the march to Montgomery to protest the attack on Freedom Riders and the death of Jackson.

Back to Vietnam, Defense (War) Secretary McNamara (Matthew Rauch) and Pentagon General Westmoreland (Brian Dykstra) are getting ready to pump up the killing with a massive “Operation Rolling Thunder.”

Poor Vice President, the once liberal Hubert Humphrey (Richard Thomas) declares with great irony that “this escalation is going to be very confusing to the American people. All we have is a very thin claim of National Security.”

And LBJ, reflecting American government leaders’ typical stupidity and cowardice, declares, “If I don’t act, the right-wingers will hammer me for being soft on communism. I don’t need to worry about the Left.” (Better to kill millions, isn’t it?) But LBJ better think again about the Left in his pocket!

There’s a funny aside of some American Medical Association officials meeting Sen. Robert Kennedy. The old white guys argue that “Medicare will hurt the sacred relationship between doctor and bank account.” Oh, no, they said “doctor and patient!”

The play sets out the good, Medicare, some steps on civil rights, against his macho insanity on Vietnam.

We see a photograph of civil rights marchers attacked on the Selma bridge, March 1965.

Fifty-seven marchers are hospitalized. The only arrest is of two violent policemen who by mistake assault an FBI agent. King will lead the march the next day.

The drama: Stokely Carmichael: “That is your bridge! You gotta right to march across it! If Sheriff Jim Clark tries to stop you, what’re you gonna do?”

Crowd: “March across it!” And they do.

Attacks, then the cowardly Congress is shamed into passing the Voting Rights Act. And King moves to the north, to Watts. August 1965. Where the slogan of the riots is “burn baby burn.” Ironic, since that is what the U.S. troops are doing to the Vietnamese. On the screen flashes the numbers who are dying there.

As War Secretary, McNamara, with trademark slicked hair, talks about sending more troops. Johnson declares the point is not to draw attention to it. “We want to avoid any premature publicity.” Not to worry, the media is in his pocket, just shout “anti-communism.”

Humphrey tells Johnson: “A land war in Asia will be ruinous to everything we’re trying to do.” He keeps saying it is a change in policy, but he doesn’t have the guts to say it out loud.

June 1966 Greenwood Miss. Stokely is arrested for 27th time. He declares, “No Vietcong ever called me nigger.” A bit of a black accent. Stokely went to Bronx High School of Science, I knew him in the early 60s, and he sounded like any New Yorker. But, that’s okay!

Now we get a focus on Chicago, and suburban Skokie where people fought blacks who wanted to live there.

More interesting, the role of Cointelpro, the FBI operation to infiltrate the civil rights movement and to run provocations.

The South Vietnam military is running away from battles, the situation is dire, the Pentagon wants an increase of 300,000 soldiers, to increase the draft by reducing standards.

And the FBI’s Cointelpro aims to discredit the civil rights movement. Massive surveillance. It would get more sophisticated in another 50 years.

Protests: “Hey, hey LBJ, how many kids did you kill today.”

By the March 68 bombings, 27,587 Americans had died. Few in the U.S. cared about the Vietnamese. The massive citizen protests forced Johnson to declare he would not run for president again.

This is an incredibly important play. And brilliantly performed by Brian Cox and the others. It should be staged around the U.S. in major theater, community and college settings.

[Lucy Komisar is a theater critic and member of The Drama Desk, the organization of New York theater critics, writers and editors. Her particular interest is the political aspects of theater.]