Jobs, Jobs Everywhere, But Most of Them Kind of Suck

Gallup asked 6,600 U.S. workers what they saw as the defining characteristics of a “good” job, then used their answers to construct a “job-quality index.” As measured by the index only 40 percent of Americans currently have “good” jobs. 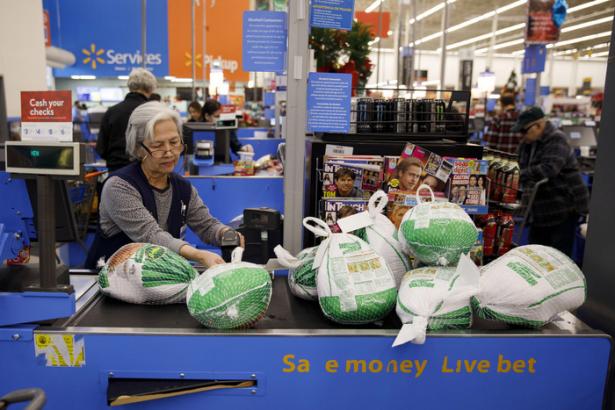 As good as it gets?, Patrick T. Fallon/Bloomberg via Getty Images

Friday’s jobs report must have been adapted from a comic book — because everyone’s calling it a “blockbuster” (and Martin Scorsese hasn’t shown any interest in it).

In November, America’s unemployment rate hit a half-century low, as U.S. employers added 266,000 positions to their payrolls, nearly 100,000 more than economists had anticipated. Revised estimates of the preceding two months revealed that September and October had witnessed the creation of 41,000 more jobs than previously understood. Meanwhile, the underemployment rate — the percentage of workers who are either involuntarily stuck in part-time gigs, or want jobs but aren’t actively looking for them — also ticked down below 7 percent for the first time in nearly two decades.

This is all very good news. Tight labor markets are no panacea for all that ails America’s working class. But they’re no mere palliative, either. A true “full employment” economy can advance many goals that liberals have struggled to promote through legislation. It is fiscally, politically, and logistically difficult to force employers to accommodate disabled workers or offer training to the under-skilled through policy in the United States (getting pro-labor laws through the Senate is Herculean; comprehensively enforcing them is Sisyphean). But engineer labor-market conditions that make hiring managers into beggars instead of choosers, and they’ll start creating opportunities for our nation’s most disadvantaged proletarians.

That being said, the working class can’t thrive on low unemployment rates alone. For the median job-seeker in Trump’s America, the odds may be good, but the good jobs are an oddity. Amid all the encouraging signs in Friday’s jobs report, wage growth remained bizarrely tepid. In a labor market as tight as this one, conventional economic models would predict a bidding war between understaffed employers, and thus, accelerating wage growth. And yet, even as the unemployment rate has fallen in 2019, the pace of wage gains has actually slowed.

Your monthly reminder of where we are on wages: From late 2017 through late 2018, it looked like wage growth was picking up. THAT ENDED. Wage growth has been backsliding this year. #JobsReport #WagesReport pic.twitter.com/fYnm2EWaxK

A lot of factors have contributed to this textbook-defying state of affairs. But an excellent new Washington Post feature on the disappearance of administrative assistant jobs illustrates some of the most essential ones.

Contrary to Andrew Yang’s grim prophecies, automation is not rendering vast swathes of the public unemployable. What technology and trade have done, however, is displace millions of Americans from their middle-class jobs, and send them hurtling down the income ladder into less remunerative occupations. And while some dimensions of this development have inspired widespread political attention (if not meaningful political action), others have gone all but unmentioned. The plight of the downwardly mobile manufacturing worker is familiar to most Americans. But that of the displaced administrative assistant is less so. And yet, they are two sides of the same story: Since 2000, the U.S. economy has shed 2.9 million jobs in (disproportionately male) production occupations, and 2.1 million in (disproportionately female) administrative and office-support roles.

As the Post notes, such clerical jobs have been for non-college-educated women what manufacturing employment once was for non-college-educated men — a route to lifelong economic security. But as administrative assistant roles have been off-shored, automated, or — at the C-suite level — refashioned into elite positions staffed by lawyers and MBAs, that path to prosperity has been foreclosed to millions of working-class women. For middle-aged workers who had built careers in the field, this has meant sudden and harrowing downward mobility. According to the Urban Institute, more than half of all workers over 50 in the U.S. eventually lose their jobs involuntarily, and 90 percent of those workers get consigned to lower-paying work for the rest of their careers. Meanwhile, for the typical millennial non-college-educated worker, our ascendant “barbell economy” (which concentrates job growth at the top and bottom of the income ladder) doesn’t even provide ephemeral opportunities for middle-class employment. Critically, this is not because our society has no use for blue and pink-collar labor: Of the ten occupations expected to add the most jobs to the U.S. economy over the next decade, six are “low-skill” roles that pay less than $27,000 a year. This trend would be alarming enough in a world where America didn’t have an extortion racket for a health-care system, runaway inflation in its higher education sector, and housing markets beset by artificial scarcity. In the world we actually live in, the collapse of middle-income job opportunities has coincided with a meteoric rise in the costs of middle-class life. 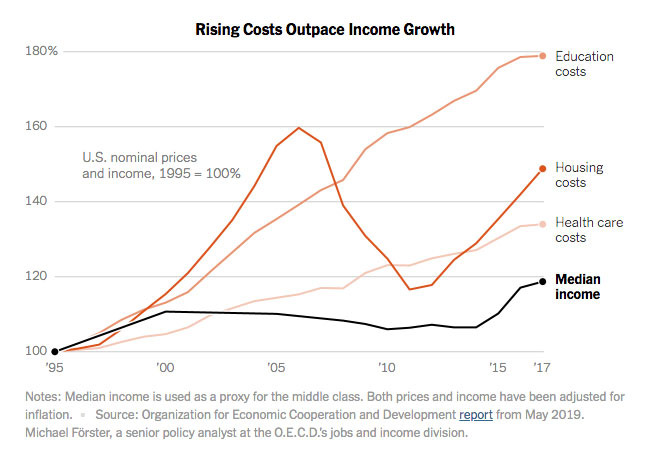 What’s more, the jobs that our “blockbuster” economy is creating aren’t just lackluster in monetary terms, but in other measures of job quality, as well. A recent Gallup survey illuminates this point. To assemble a more fine-grained portrait of American working life than federal wage and employment data can provide, the pollster asked 6,600 U.S. workers what they saw as the defining characteristics of a “good” job, then used their answers to construct a “job-quality index.” The resulting metric reflects not only a given job’s level of wages and benefits but also whether it offers career-advancement opportunities, stable hours, a sense of purpose, the ability to change unsatisfying aspects of one’s employment, and job security, among other things.

Gallup’s headline finding is that, as measured by its index, only 40 percent of Americans currently have “good” jobs. But a more telling (and less ambiguous) finding from its survey may be this: While 59 percent of U.S. workers say their wages have increased over the past five years, no more than 37 percent say any other key marker of job quality has improved over that period. In fact, roughly as many workers say their job’s non-cash benefits have gotten worse in recent years (21 percent) as say they’ve gotten better (23 percent). Meanwhile, majorities report no gains in their job’s sense of purpose, enjoyability, or the stability and predictability of its wages — all factors that respondents rated as being more important to job quality than overall pay. 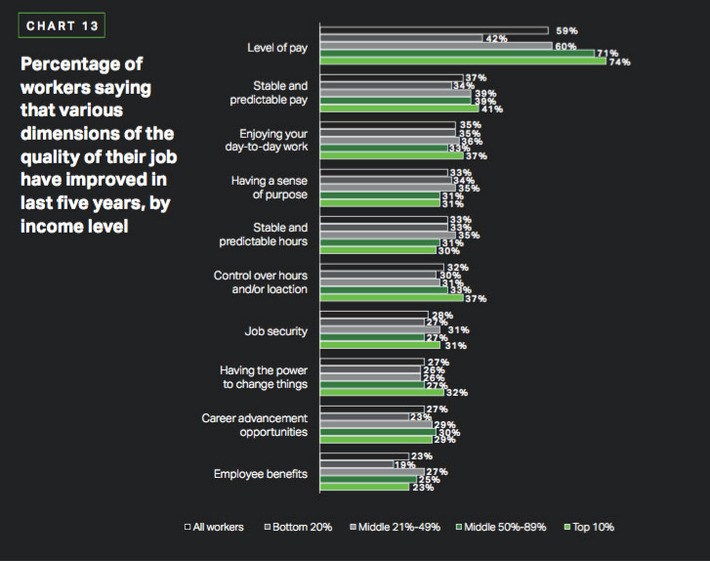 Hot labor markets can marginally improve the quality of working-class jobs — for as long as the business cycle allows them to, anyway. But to make the blue- and pink-collar occupations of tomorrow into roles as well-compensated as the unionized manufacturing and administrative assistant positions of yesteryear, we are going to have to shift the balance of power between labor and capital through “big structural reform.” And to do that, we’re going to need some kind of “political revolution.”

Eric Levitz is a New York-based journalist and contributor for the New York Magazine.