A Former Clinton Aide on Embracing the Sanders Movement 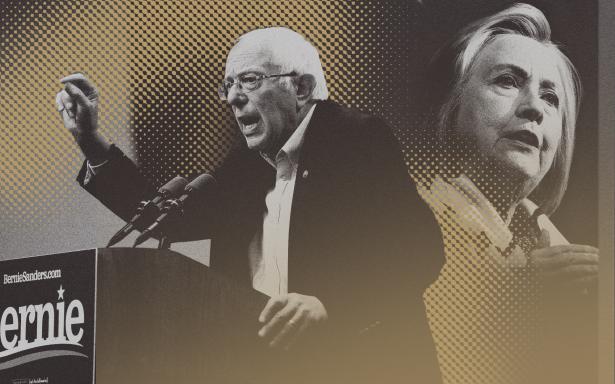 About 15 years ago, following a decade-long career in the music business, I became the “blog guy” for John Kerry’s presidential campaign, working out of his war room. I entered the political arena as a netroots activist, part of the progressive online community that arose in response to the Bush presidency at the dawn of our current media age. Then I moved to the inside, (perhaps naively) believing I could help change the system from within.

That led, in 2006, to what would become a long association with the Clintons.

Although I disagreed with Hillary Clinton on a number of issues, most notably the Iraq war, I believed that electing her president would be a historic step forward for women’s rights. I became her digital media adviser in 2006 and also worked for the Clinton Global Initiative for several years. By 2008, I was hired as the Clinton campaign’s Internet Director. I was in the heart of the system. The “establishment,” as Bernie Sanders would call it.

When Clinton ran again in 2016, I was not part of her official team, but I viewed her second campaign as a logical extension of my mission to help elect the first (Democratic) woman president in U.S. history. I became a fierce Clinton advocate, especially on Twitter, where I battled her detractors and rallied her supporters. My military experience in Lebanon, where I was raised, taught me that once you’re in the trenches with someone, you fight ferociously to defend them, to win. I was single-minded in my determination to help elect Clinton.

Looking back, I see I went too far. I lost perspective. The election became more about the person than the issues, more about defending a candidate than advancing a progressive worldview.

I have begun to question my core assumptions about politics and society, about the meaning of democracy in our dysfunctional two-party system, about the root causes of injustice and inequality.

Now, the Trump presidency has compelled me to take a hard look at my own life and work. How is it possible that after 20 years in the political trenches, all I have to show for my activism is a crook and racist like Donald Trump in the White House, surrounded and protected by lawless Republican thugs like Bill Barr, Mike Pence, and Mitch McConnell?

The irony of my political journey is that my politics during the Bush-Cheney years put me squarely in sync with people like Paul Wellstone and Bernie Sanders. During the early part of the 2016 primary, I was excited by the Sanders campaign and praised him for raising issues like extreme inequality, which I had written about for years. But as the Democratic primary intensified, I hit back hard at any critique of Clinton’s character from right or left. And in the process I alienated many fellow progressives. I never used the term “Bernie Bro,” but I contributed to the narrative that Sanders supporters were all angry white males. I have apologized for that. I apologize here again. For the past two years, I’ve worked hard to build bridges to the Sanders supporters I fought with. And thankfully, they’ve reciprocated.

But my recent metamorphosis has gone beyond just expressing 2016 regrets or warming to Bernie Sanders after opposing him in the last election. I have begun to question my core assumptions about politics and society, about the meaning of democracy in our dysfunctional two-party system, about the root causes of injustice and inequality. I have been studying and learning more about neoliberalism, capitalism, and socialism to educate myself on the deeper structural issues that have led to obscene wealth and power concentrated in the hands of a tiny minority.

That I am going through this evolution in my fifties may seem surprising, but I was a late arrival to U.S. politics. Born and raised in Beirut to an American mother and Lebanese father, I spent my youth struggling to survive the brutal civil war that ravaged Lebanon for 15 years. I barely made it out. When I moved to my mother’s home city of New York to attend NYU, it was my first taste of life without the constant threat of sectarian violence. As a budding jazz musician shell-shocked from war, I found a haven in the New York music scene of the ’90s, eventually spending a decade working as a remixer, keyboardist, and producer for major recording artists.

My political awakening came in my thirties, when George W. Bush was (s)elected president. I left my music career behind and devoted myself to opposing his presidency. I dove headfirst into activism — marching, protesting, speaking out. I joined early political message boards and became part of the progressive online community. I railed against Democrats who caved and cowered to Bush and Cheney. I was an outsider, doing my part to fight a corrupt system. I believed that I could make a difference.

Today, after several years of working from the inside, I’ve come full circle to my anti-establishment roots. I want true accountability and honesty — from people like me who have worked for Democratic Party leaders, and from the leaders themselves: the Clintons, Obamas, Pelosi, Schumer, Hoyer, and others who have failed to stop the grinding march of right-wing extremism.

I’m seeking real answers, not platitudes. How can the political/media establishment effectively normalize schoolchildren being massacred and people crowdfunding their medical bills as they fight for their lives? How can the mortal threat of climate change go largely unaddressed? How can Black citizens be murdered by police officers with no consequences? How has the Supreme Court become a right-wing rubber stamp? Why have babies been droned and migrant children caged under Democrats, not just Republicans? What role has the Democratic Party played in the oppression of the working class and the rise of the oligarchy?

How is it possible that after 20 years in politics, all I have to show for my activism is a crook and racist like Donald Trump in the White House?

These aren’t entirely new questions for me. Over the years I’ve written many times about the Democratic Party’s moral lapses. But Trump’s presidency has brought a new urgency, a need for self-reflection and ownership of failures. It’s hard to avoid the obvious: The Beltway class is unwilling to change the status quo. That goes for Republicans, Democrats, and media elites. Money talks. The machine benefits them. That’s not to paint everyone with a broad brush — it’s to accept the harsh truism that Washington works for the powerful, not the people.

Incremental change won’t result in meaningful long-term progress. Democrats winning occasional elections may lead to less draconian policies for a time. And that’s a good thing. But it is always two steps forward and three steps back. Theocrats, plutocrats, and white supremacists are ascendant, consolidating their grip on power.

It is long past time to overhaul the entire system. It is time for a nonviolent political revolution. After my 2016 experience, I don’t want to focus on defending one politician. I don’t want to go from “Hillary man” to “Bernie man.” I want to do everything possible to help amplify and grow a movement that can bring about more fairness, justice, and equality.

So, for the 2020 race, I am aligned with the people-powered movement sparked by Sanders. His plan for a systemic overhaul, a fundamental restructuring of our approach to government, is the only viable path to meaningful progress in the United States. His voters have created a mass movement to do it, one that has attracted millions of young people — America’s future. I feel at home in it.