For the last two years and a half women students and faculty have exposed and denounced the rampant sexual abuse and sexist education that take place in Chilean schools and universities. 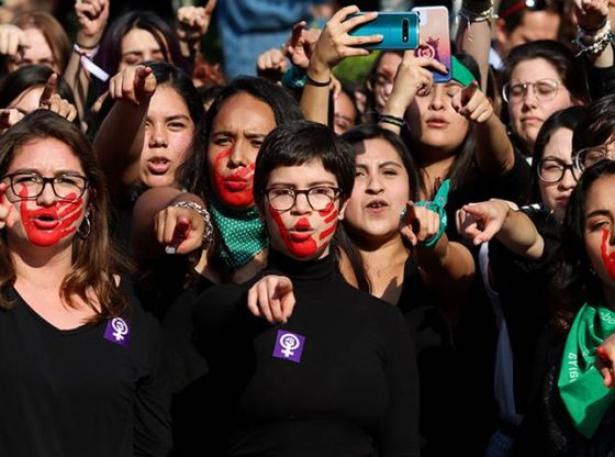 I was sitting in my hotel room in Santiago late last month when I heard a commotion outside. I went out to investigate and found about 50 women walking down the middle of a main street in the upper-middle class neighborhood of Providencia. They stopped when they came to a busy intersection and performed “Un violador en tu camino” (A rapist in your way), the song that has become a feminist, global hymn against male violence. In seconds a large crowd, mainly composed of women, gathered to watch. By the second round, many of the spectators had become participants, and feelings of empowerment, defiance, and joy filled the atmosphere. There, on a crowded street in Santiago, women not only defied the police, they created a space in which women felt safe and strong, a feeling that, at least for me, and I suspect for many more, lingered long after the performers had moved on to enact their piece in another spot.

Setting the stage for the performance I saw in Providencia, on November 25, 2019, a large group of young Chilean women performed “Un violador en tu camino” (A rapist in your way) in Santiago to commemorate the International Day for the Elimination of Violence against Women. The video of their performance in front of the Chilean Supreme Court went viral and women across Latin America, Europe, the United States, as well as in Australia, India, and Turkey have since staged the piece in both Spanish and a host of local languages. In just a few short weeks, the powerful lyrics, catchy tune, and dramatic moves that comprise the hymn have become a global symbol of women’s anger and their repudiation of the misogynist violence and gendered discrimination that permeate the world. However, the performances do more than denounce male violence; the choreographed movements, chorus-like singing, and collective spirit also embody and promote women’s solidarity. They tell women they are not alone and alert the perpetrators to beware – they will not escape the fury of women’s justified outrage. The performances take place in public, in plain view of the world, in opposition to the sexual abuse and femicide, which occur in hidden spaces, away from the gaze of others. And they are performed as a group, in unison, to assert the collective power of women to join together to support each other and jointly overcome male violence.

For the last two years and a half women students and faculty have exposed and denounced the rampant sexual abuse and sexist education that take place in Chilean schools and universities. On April 16, 2018,170,000 students marched in the streets of Santiago because, in the words of one student, “We are tired of being abused, of revictimization. . . . We need to transform the educational model so we are not assaulted from the time we are young girls.”  In May 2018 thousands of university students occupied facilities on their campuses to condemn these practices and call for change. The four women known as Las Tesis who composed “Un violador en tu camino” were part of that movement. And their song reflects the students’ denouncing of male violence and their demand that those who commit the crimes be held responsible for them.

The message of the lyrics has acquired even greater significance in the context of the national protests that have engulfed Chile since October 18 because the Chilean carabineros or pacos (Chilean slang for the police) have sexually abused women they have detained. According to Chile’s National Human Rights Institute, the pacos have sexually abused 74 women and forced many female detainees to remove their clothes then squat while naked.

The song has become so popular is because the words resonate so profoundly with so many women. In a world that still blames women for the sexual abuse they suffer, they reverse the shame women have been taught to feel when they say, “Y la culpa no era mía, ni dónde estaba ni como vestía” (And it wasn’t my fault, where I was, or how I dressed) at which point the women vigorously march, arms pumping, in place, as if trampling on and stamping out the lies about women being responsible for the violence committed against them. They denounce the men who commit the crimes, “El violador eras tú” (the rapist is you), and angrily point an accusatory finger straight ahead. However, they don’t simply condemn the individual men who rape women. They accuse “the police, the judges, and the oppressive state,” the male-dominated institutions that define and determine what is a crime and who is a criminal. In other words, “El estado opresor es un macho violador” that has allowed men to escape the punishment they deserve.  It is the patriarchal state that condones the sexual abuse of women and it is the patriarchal state that must be exposed and condemned for this crime.

Sandwiched between rounds of “el violador eras tú” are four lines that appear to be a ballad or a lullaby. Addressed to an “innocent little girl,” they tell her she can “sleep peacefully, without worrying about the bandolero (criminal)”, because “your lover, the carabinero is watching over you.” They are a stanza from the Hymn of the Carabineros de Chile. Their positioning between rounds of “el violador eras tú” make the message very clear. Far from protecting little girls, or big ones for that matter, the Chilean police, the violent enforcers and enactors of state policy, are the perpetrators, the rapists, the violators.

Although young women initiated the action, older women have embraced it as well. They do so because they, too, have been and are the targets and victims of male sexual abuse, a practice that they join the younger generation in wanting to end once and for all.  On December 5 women, playfully calling themselves Las Tesis Senior called on women over 40 to join them in a special performance of “El violador en mi camino” at the Estadio Nacional. That evening roughly 10,000 women did so and the huge event became a jubilant affirmation of women’s strength and determination to overcome not only rapists but any obstacle in their path.

One other aspect of the song is worth noting. Not only have women across Latin America adopted it, so, too, have Latin American women in Europe, the United States, Canada, and Australia. It has promoted solidarity, perhaps even a shared identity, among Latin American women immigrants, exiles, and residents who live in non-Latinx dominant nations. This was brought home to me in Chicago, where I live. Chilean women living in Chicago called on other women to join them at Millennium Park to stage the piece on December 7. Although many of the women were Chilean, women from Mexico, Puerto Rico, Spain, and Venezuela also participated. Each time we finished one round of the song, the organizers told us to turn to the women next to us and exchange hugs, which everyone did. The song, the steps, the performance, the spirit, and the ending embrace all affirm women’s refusal to tolerate male sexual violence and their commitment to working together to end it.

* The author would like to thank Lisa Baldez and Melinda Power for their comments on an earlier draft.

Margaret Power is a professor of history at the Illinois Institute of Technology. She is the author of Right-Wing Women in Chile: Feminine Power and the Struggle against Allende, 1964-1973. She is also a member of the Radical History Review Editorial Collective.