Bernie Sanders’s strong showing in Iowa is a turning point in the battle between the party’s establishment and left wing. 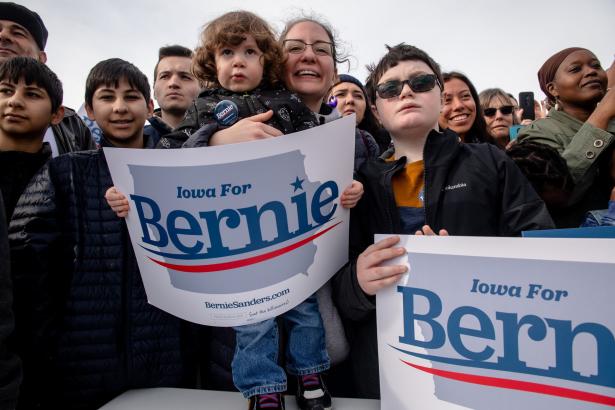 In an interview with The Hollywood Reporter in mid-January, Hillary Clinton said she considered Bernie Sanders unaccomplished and unlikable, with few friends on Capitol Hill. Then, last Friday, as though sensing the controversy generated by her remarks had faded all too quickly, Mrs. Clinton appeared on the liberal-minded podcast “Your Primary Playlist” to accuse Senator Sanders of failing to do enough to unite the party behind her candidacy after her primary win in 2016.

Mrs. Clinton was not alone in her apparently rising anxiety. Near the end of last month, the centrist think tank Third Way released a memo all but begging Iowans not to vote for Mr. Sanders. The former Democratic nominee John Kerry was reportedly overheard on Sunday contemplating several strategies to stop Mr. Sanders from taking the nomination. Meanwhile, Democratic National Committee members are considering shifts in convention rules tailored to hobble Mr. Sanders’s chances.

It is fair to conclude that the Democratic Party’s center is panicking, and it is now fair to conclude that it has good cause: With 62 percent of Iowa caucus results in, Mr. Sanders leads the popular vote, with 26.3 percent. He trails former Mayor Pete Buttigieg of South Bend, Ind., in state delegates by a slim margin. But with Mr. Buttigieg struggling in primary polls in New Hampshire and Nevada, it seems unlikely his campaign has the kind of momentum that could lead to the nomination. Thus, the greater Iowa upset is that heir apparent Vice President Joe Biden is a distant fourth. With Mr. Biden’s front-runner status compromised, Mr. Sanders emerges from Iowa as a formidable candidate — without establishment imprimatur.

Mr. Sanders leads the popular vote in Iowa not because he is favored by entrenched powers within the Democratic Party or because he has institutional support in the form of steady contributions from policy-minting think tanks, big donors or major political pundits.

On the contrary, Mr. Sanders leads the popular vote despite lacking all of those mainstays of traditional electoral success, and in defiance of a vigorous tide of establishment attacks. And he leads amid an incompetently executed caucus process that delayed results and robbed him of a traditional winner’s news cycle.

Mr. Sanders’s strong showing is no guarantee that he will win the nomination. But it is a powerful repudiation of establishment hegemony — and an inflection point in the battle between the party’s center and left wing.

Shortly before the caucuses, Michael Kazin, a professor of history at Georgetown University and co-editor of the left-leaning journal Dissent, told me that a Sanders nomination would be very significant. “He’d be the most radical candidate, in many ways, in American history, not just for Democrats, but for any party,” Professor Kazin said.

Mr. Sanders’s radicalism, Professor Kazin speculated, is troubling to establishment Democrats for a variety of reasons, from worries about his strength against President Trump in the general election to a desire to find a candidate who can unite the party. Both of those concerns seem surmountable to me. But the one unsurmountable establishment fear surrounding a Sanders win is something more like naked self-interest, and its attachment to power.

Joe Biden was perhaps the closest candidate the party’s establishment had to a sure thing in the 2020 election, and he has run on the premise that he alone can defeat Mr. Trump, even though the latest head-to-head matchup shows Mr. Biden performing about the same as Mr. Sanders against Mr. Trump.

Mr. Biden has run before and lost before, and despite early leads in several important primary polls, he has begun to slip in key states, including Pennsylvania. Worse, Mr. Biden has become entangled in the impeachment proceedings against Mr. Trump, with Senator Joni Ernst floating the idea of instigating an investigation into the Biden family’s dealings in Ukraine.

Part of Mr. Sanders’s resilience against centrist attacks stems from his grass-roots movement of small donors, organizers and vocal supporters. If party leaders openly assail him, they risk alienating Sanders loyalists, only 53 percent of whom say they will certainly support the Democratic nominee if it isn’t him. The problems at the Iowa caucus have instilled even more rancor and suspicion regarding Democratic institutions among his base. Establishment attacks on Sanders — especially if effective — could result in Mr. Sanders’s base simply staying home in the general election.

Yet if Mr. Sanders’s rise continues unimpeded, the party may risk demoralizing fiscally conservative Democrats, though those voters may be more likely to support a Democrat in the general election no matter what than Mr. Sanders’s passionate backers.

If they attack Mr. Sanders, “they’re going to get a massive backlash, but if they don’t, then they’re going to lose the center of the party,” Jefferson Cowie, a historian of American class politics at Vanderbilt University, told me recently. “It’s a very volatile moment, I think, in the party’s history.”

But the threat Mr. Sanders poses to centrist control over the party apparatus seems to be the most serious risk of all, at least as far as party insiders are concerned.

“If he won the nomination, I think obviously he would take over the party,” Professor Kazin said. “When you get the nomination, you usually get to name a new chair of the D.N.C., for example. And every congressional candidate would either have to get on board with his politics, more or less, or at least make peace with him.” A Sanders White House would likely also produce much less demand for the center-left policymaking institutions that dominate Washington.

“That’s the change, I think, that would be quite radical and amazing,” Mr. Sanders’s campaign manager, Faiz Shakir, told me over a recent lunch. “You’d have to compel and force institutional structures to start to bend to an agenda that they have long forgotten or discarded.”

He added, “We’d have to have people doing analyses of Medicare for All, what the benefits of cost savings would be for families — things that could have and should have been done, but haven’t really ever been done on a sophisticated major national scale.”

So the Democratic establishment has its reasons for opposing Mr. Sanders. And though Mr. Sanders’s campaign has overcome a bracing bout of what Mr. Shakir calls “elite headwinds,” it still faces barriers. Mr. Sanders’s embrace of democratic socialism will likely be an item of anxiety for many voters. But if 2020 continues to signal a repudiation of establishment politics and norms, the socialist stigma may be weaker than we think.

Recent polling from the Pew Foundation shows that, while Republicans are overwhelmingly opposed to socialism, 65 percent of Democrats feel either somewhat or very positively about socialism (55 percent say the same about capitalism). It may be that socialism is less disturbing to voters on the fence than Mr. Trump’s manifest deficits, or it may be that the label itself has lost some of its Cold War infamy. Or it may be that, whatever voters think of democratic socialism, they understand that it signifies a departure from Democratic politics as usual.

It is difficult to see a robust centrist victory in the months ahead. Supposing Mr. Sanders follows Iowa with a win in New Hampshire on Feb. 11 — as polling forecasts — then his campaign will have achieved heady momentum. Mr. Biden may hope to eke out a lead through success in Southern primaries and tweaks to convention rules, but Mr. Sanders is picking up steam in South Carolina, and these 11th-hour D.N.C. machinations reek of desperation. A narrow win under dubious conditions is no victory for the center, and augurs doom even as it delays it.

Matt Bennett, vice president of Third Way, has expressed deep worries about Sanders. “We simply can’t stand by while there’s a threat that Democrats could nominate a guy who would hand such nuclear-level ammunition to the Trump campaign,” Mr. Bennett recently told NBC News.