Yes, the Dow is at a record high and unemployment rates are lower than they have been in decades – but 140 million people are also poor or low wealth 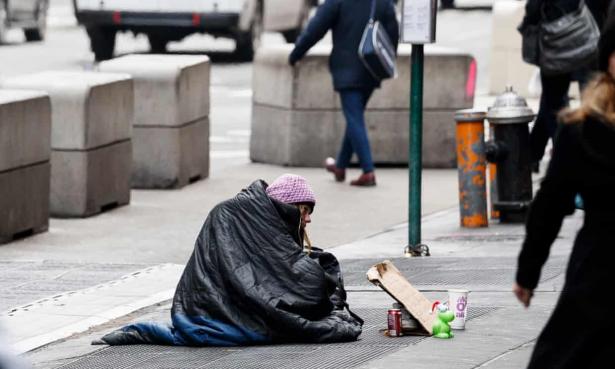 ‘Sixty per cent of African Americans are poor or low income, as are 64% of Hispanics, but the largest single racial group among America’s poor and low income – 66 million Americans – are white.’ , Justin Lane/EPA

Rather than offer a report on the State of the Union, Donald Trump used his annual primetime slot in the House of Representatives to host a re-election rally. The House speaker, Nancy Pelosi, summed up the sentiment of the House majority when she stood behind Trump and ripped the text of his speech in half. “I tore up a manifesto of mistruths,” she later said. But of all the lies he told, the president is proudest of the economy he claims is booming. Poor and low-income Americans know that the economy is, in fact, his greatest vulnerability.

Yes, the Dow is at a record high and official unemployment rates are lower than they have been in decades. But measuring the health of the economy by these stats is like measuring the 19th-century’s plantation economy by the price of cotton. However much the slaveholders profited, enslaved people and the poor white farmers whose wages were stifled by free labor did not see the benefits of the boom.

In America today, 140 million people are poor or low wealth. While three individuals own as much wealth as all of them put together, the real cost of living has soared as wages have stagnated. Since the 1970s, the number of people who are paying more than a third of their monthly income in rent has doubled, and there is not a single county in the nation where a person working full-time at minimum wage can afford to rent a two-bedroom apartment. Sixty per cent of African Americans are poor or low-income, as are 64% of Hispanics, but the largest single racial group among America’s poor and low-income – 66 million Americans – are white.

Every day in America roughly 700 people die from poverty

While Trump stirs racial fears by attacking “sanctuary cities” and black political leaders, there are more white Americans who are unable to meet their basic needs than at any time in this nation’s history. Every day in America roughly 700 people die from poverty. When seven young people died from vaping, Trump called it a national emergency. But for the past four decades, Republicans have racialized poverty while Democrats have run from it, adopting euphemisms like “those who aspire to the middle class” to talk about poor people. By accepting the lie that everyone does better when the economy does better, both parties paved the way for the extremism of a plutocratic presidency.

We know that elites whose stock portfolios and personal taxes have benefited from the Trump tax cuts are going to stand by this president. But those people are an extreme minority – a literal plutocracy – in this nation. The question in 2020 is not whether Trump’s most ardent supporters will stand by him, but whether Democrats will embrace an agenda that can inspire poor and marginalized people to engage in a political system that has simply overlooked them for decades.

Even if Trump doesn’t lose a single vote from 2016, we know he lost the popular vote by more than 3m and won the electoral college by 77,000 votes across Wisconsin, Michigan and Pennsylvania. If just 3-5% of the poor and low-income people in those states who did not vote in 2016 were motivated to turn out this fall, Trump wouldn’t have a chance. Each and every one of those people, black, white and brown, knows this economy isn’t working for them.

In Kentucky last year, the incumbent governor, Matt Bevin, sought re-election in a state Trump won in 2016 by 30 percentage points. But poor and low-income white people in Appalachia and black and brown people in Louisville and Lexington worked together through the non-partisan Poor People’s Campaign: A National Call for Moral Revival to insist that access to healthcare, living wages and high-quality public education for all Kentuckians were not left or right issues, but right or wrong issues. And on each of the issues, Trump and Bevin were wrong. Trump flew in to rally his base for Bevin, but his challenger won. And when the victor, Andy Beshear, gave his victory speech on election night, he quoted the moral language of the Poor People’s Campaign.

As we look toward another election this fall, we know Trump’s campaign is going to be all about the economy. But we also know that message rings hollow for the vast majority of Americans. The work of 2020 must be to build power for a broad coalition that can give voice to issues affecting poor and low-income Americans and compel Democrats to speak to them, up and down the ballot.

Rev. William J. Barber II is an American Protestant minister and political activist. He is a member of the national board of the National Association for the Advancement of Colored People and the chair of its Legislative Political Action Committee.

Independent Investigative Journalism. Get a digital subscription to The Guardian