Why Is Nevada’s Most Powerful Union Turning on Bernie Sanders?

Top leaders in Unite Here Local 226 in Las Vegas have been circulating attacks on Bernie Sanders and his Medicare for All proposal. They should listen to their membership and stop slandering the most pro-worker candidate in the race. 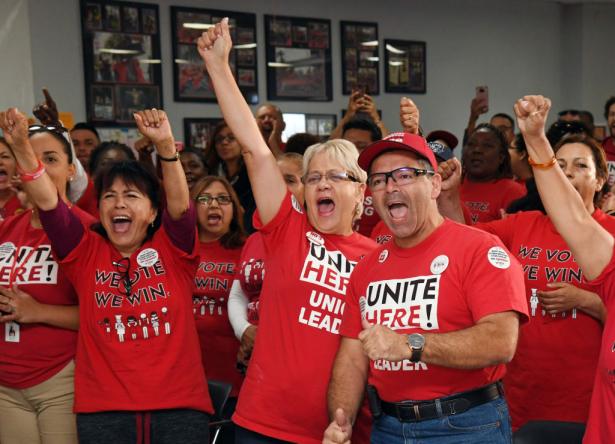 Union members cheer during a rally at a canvass launch at the Culinary Workers Union Hall Local 226 on November 5, 2018 in Las Vegas, Nevada, Ethan Miller / Getty

Earlier this month, Unite Here Local 2 of San Francisco — along with four other California locals of the hotel and restaurant employees’ union — endorsed Bernie Sanders for president. This came on the heels of two other Unite Here endorsements: the state-wide Texas chapter of Local 23, and Local 11 from southern California (which endorsed both Sanders and Warren).

A recent report also showed that Unite Here staff are donating at particularly high rates to Bernie Sanders. And just today, Unite Here members launched a Bernie endorsement letter, calling upon members and leaders of the union to “stand with the Bernie Sanders campaign, the movement for workers’ rights and Medicare for All.”

Unfortunately, the largest Unite Here local, 226, has taken a shocking position: declaring war on Bernie Sanders and his signature policy initiative, Medicare for All. Though a recent flier, the union claimed that his Medicare proposals would “end” members’ health care. It has far kinder things to say about the center-right of the Democratic field: Joe Biden, Pete Buttigieg, Amy Klobuchar, and Tom Steyer.

Of course, it’s worth noting that Local 226 is a strong union that does important, progressive work and that has negotiated excellent health insurance for more than 100,000 workers. This should be lauded.

But let’s also be clear about what is happening: top leaders of Local 226 are taking a conservative position and harming the whole labor movement in the process. That Local 226 is a powerful and important union makes this all the more tragic. Rather than engage with the pro-worker frontrunner on his plan, they are poisoning the well for workers everywhere.

We have to push for Local 226 to change course before the February 22 Nevada Caucus.

Socialism is love! For Valentine’s Day, subscriptions and gift subs to Jacobin are only $14 if you follow this link.

There have always been two impulses in the labor movement: first, the one that 226’s leaders are currently following, to keep benefits weak for nonunion workers, so they are incentivized to unionize. But there is another competing, progressive impulse, the one that led labor leaders to champion the Fair Labor Standards Act of 1938, creating a federal minimum wage for nearly all workers, for the first time in the nation’s history. This second impulse is to raise the floor for all workers, not just the ones who are lucky enough to have union representation.

This politics of solidarity is not only ethical, but it has a self-interested element. Medicare for All would take health care out of competitive market forces; winning it would enable Local 226 and every other union in the country to raise the floor even further, by negotiating new benefits and higher wages.

Top leaders in Unite Here Local 226 should do the right thing and stop slandering the most pro-worker candidate in the race.

Luke Elliott-Negri is active in the labor movement and is a PhD student in sociology at the CUNY Graduate Center.