Iowa and New Hampshire were big wins for Bernie, but in neither state did his vote total reach 30%. Bernie will have to substantially expand his base if he is going to capture the nomination, not to mention succeed in beating Trump in November. 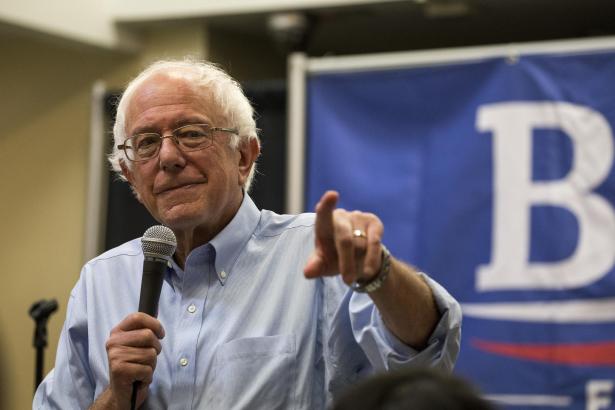 This is the third installment of Organizing Upgrade’s new 2020 election column “This is Not a Drill”.

Donald Trump’s post-acquittal, gangster-style revenge campaign underscores the dangers from a President who can act with impunity and the high stakes in next November’s balloting. At the same time, Bernie Sanders’ momentum coming out of Iowa and New Hampshire brings us closer to the goal of having a progressive candidate and message shape the 2020 campaign against Trump’s racist, authoritarian bloc.

The Senate vote to acquit in its no-witnesses sham trial indicates there is no line the President can cross that the GOP will not accept. The emboldened President’s State of the Union speech was one long, lie-filled promise that it would be aggression on all fronts going forward:

“Trump unapologetically aligned himself with the war-mongering militaristic policies that one expects in fascist societies. His most fascistic statements centered around celebrating Immigration and Customs Enforcement officers, conflating undocumented immigrants with “criminals,” and describing sanctuary cities as a threat to American security and safety… [the speech] reeked with the mobilizing passions of fascism…” – Henry Giroux writing in Truthout

White House actions sent the same message. In rapid succession the administration added six countries, including Nigeria, Africa’s most populous nation, to its anti-Muslim travel ban and announced an end to the ban on use of cluster bombs and anti-personnel land mines. Trump declared his intention to veto any bills limiting his authority to take military action against Iran. Construction began on a section of Trump’s Wall within the Organ Pipe Cactus National Monument, an environmentally sensitive area that is also sacred to the Tohono O’odham Nation. And on February 10, Trump submitted a budget for the next fiscal year that substantially increases spending for the military, immigration enforcement and building the Wall; extends provisions of his 2017 subsidize-the-1% tax cut, and proposes deep cuts in Medicare, Social Security and environmental protection and eliminating federally subsidized student loans.

“A PARTY OF THUGS”

Simultaneously, Trump has launched a campaign of retaliation and demonization against impeachment witnesses and others who have opposed him. Ambassador Gordon Sondland, Army Lt. Col. Alexander Vindman and even his non-involved twin brother were removed from their posts. Trump called Sen. Mitt Romney a “pompous ass” for voting to convict him; his son Donald Jr. called Romney a “pussy.” Matt Schlapp, chair of the Conservative Political Action Conference, warned that Sen. Mitt Romney “may not be physically safe” at this year’s gathering, prompting Joan Walsh to write in the Nation that Schlapp signified the “transformation of the GOP into a party of thugs.”

Proving Walsh’s point, Trump as Mafia Don tweeted that legal proceedings against convicted “made man” Roger Stone were unfair and immediately (and mysteriously!) top Justice Department officials over-ruled their own prosecutors and reduced the sentence they were recommending to the Court. A new degree of lawlessness is thus added to the authoritarian impulse and deep-seated racism that lies at the core of Trumpism. Trump is taking it on the road, basking in crowd chants of “lock her up” in New Hampshire (this time directed at Nancy Pelosi) and claiming once again that any election he loses is only because “lots of illegals are voting.” Buoyed by fawning sycophancy from the Trump Loyalty Cult (a.k.a. GOP Senators and Representatives) the President is starting the next phase of his re-election campaign with highest approval rating of his presidency (43.7%), an unlimited campaign war chest, and a right-wing disinformation machine that locks his base into a fact-free zone. Trump is unbound and more dangerous than ever.

At the other end of the country’s political polarization, the big news coming out of Iowa and New Hampshire is the continuing surge of support for Sen. Bernie Sanders. Already gaining in the polls as February rolled in, Bernie got the most votes in both the first and second round of the Iowa balloting while the chaos in tabulating and reporting the results demonstrated the incompetence (many believe worse) of the Democratic Party establishment that Bernie is campaigning against. Add the impressive nature of Bernie’s “ground game” and the breadth of his grassroots fundraising operation and the post-Iowa momentum was mainly his. (The Iowa chaos is also a vivid reminder that this small, overwhelmingly white state is unrepresentative of the Democratic electorate and doesn’t deserve the outsize role in presidential campaigns that comes from placing it first.)

Bernie’s win in New Hampshire boosted him further. Nationwide polls after New Hampshire are not yet available, but as of voting day Nate Silver’s 538 compilation showed Bernie taking the lead with 22.3%, 2% ahead of Biden and 9% in front of Michael Bloomberg who has pushed Elizabeth Warren out of third place. The 538 blog now gives Bernie a 37% chance of winning a majority of pledged delegates; no other candidate comes close.

The race now heads to South Carolina, Nevada and Super Tuesday, where numerous southern States and California have large African American and Latinx populations. Buttigieg has very little support among voters of color and Biden’s appeal has been substantially diminished by his weak showing in the first two primaries. Overall the Biden-Buttigieg-Klobuchar-Bloomberg “center lane” is badly divided and Elizabeth Warren has faded.

Bernie is the front runner! It’s a moment to savor—but not one to rest.

CAN BERNIE EXPAND HIS BASE?

Iowa and New Hampshire were big wins for Bernie, but in neither state did his vote total reach 30%. Though he now leads in nationwide polling, his number there is not even 25%. Bernie will have to substantially expand his base if he is going to capture the nomination, not to mention succeed in beating Trump in November.

Accomplishing this is doable but it will not be easy. Bernie will need to do more than make gains at Elizabeth Warren’s expense and inspire many who have not voted in the past to rally to his campaign. He needs to make serious inroads into the constituencies that voted for candidates on the other side of the progressive-“moderate” divide. In Iowa, in New Hampshire and in nationwide polling, support for the “center lane” candidates registers over 50% and exceeds support for Bernie and Warren combined.

Many of the program planks that are the basis for the passion of Bernie’s core base are not (yet?) popular among “centrist” voters. For instance, though Medicare for All has become far more popular (thanks to often left-led effective grassroots campaigns as well as Bernie’s efforts), only a minority of Democratic voters currently back Bernie’s stance of eliminating private insurance altogether.

And then there is the “electability” conundrum. Establishment pundits keep using this term in gatekeeper fashion, hoping to disqualify candidates who seriously challenge the status quo by fiat. But there is a reality beneath the manipulative punditry: a huge proportion of the constituencies who do or might vote for a Democrat in November put beating Trump at or near the top of their priority list. Everyone is aware that Trump will slime whoever he is running against. But a significant number fear that the GOP’s red-baiting, “don’t let the government take away your health care,” mud and other smears will stick to Bernie more than they would to others. And increasing reports that the strategists in Trump’s camp think Bernie is the weakest of their possible opponents are reinforcing those fears.

So far Bernie is doing just about everything right in navigating this minefield. Of course he has shortcomings; despite the quality of his racial justice program he still can’t seem to talk off the cuff about race in a convincing way. But his consistent message about the 99% vs. the 1% resonates with many beyond his core base. His message that change will come from “us” not “him” fosters deeper political involvement among those attracted to his campaign, And while he makes his case that he is the best candidate to beat Trump, he refuses to burn bridges with rival contenders and consistently calls for unity against “the most dangerous president in history” (that’s his trademark description of Trump) no matter who gets the nomination.

This is the overall package that not only catapulted Bernie to front runner status but gives him the best chance to win the nomination or, failing that, to maximize the leverage of progressives within the 2020 anti-Trump coalition and build the left over the long term.

Because of this, Bernie’s stance has put the Democratic Party Establishment between a rock and a hard place.

That the “centrists” want to prevent Bernie from winning the nomination is a given. But Trump’s demonizing of even the most conservative Democrats and the very real threat that a thoroughly Trumpified Justice Department would prosecute some of them for “crimes” (remember J. Edgar Hoover’s blackmail of the Kennedy’s?) are a world apart from Nixon’s courting of establishment Democrats who didn’t like George McGovern in 1972. So whether they will go all out against Bernie (and sit out the general election if they fail) or accept a Bernie nomination and work to beat Trump is not yet decided. The most likely scenario is a sorting out process where some go one way and some go the other – and the combination of what carrots and sticks the left puts before them can make a difference.

The impulse among some Democratic heavyweights to organize “Stop Bernie” movement has already been reported. But knowledge that they need Bernie voters in the fall to have any chance of beating Trump with another candidate, on top of worries that such a crusade would only backfire, so far have stayed their hand. Meanwhile, a wing of the establishment seems to be signaling that they will prioritize beating Trump over putting all their eggs in any stop Bernie effort. (Part of their calculation is that there will not be even close to enough “Berniecrats” in Congress to give Sanders complete control of the post-2020 agenda.) A number of top Democratic Party operatives and elected officials have joined with SEIU, several other important unions, Indivisible and Color of Change to launch Organizing Together 2020 and immediately throw resources into an anti-Trump effort in six key battleground states.

Even some Never-Trump Republicans have decided they will back Bernie if it comes down to it: Conservative Joe Walsh after ending his primary challenge to Trump is now promoting a pledge to support whoever the Democratic nominee turns out to be while stating “I’d rather have a socialist in the White House than Donald Trump.”

With unexpected things like that happening every day, beating Trump – and doing so in a way that gives partisans of social justice, peace and a livable planet greater strength to engage.