Michael Bloomberg and the Dangers of ‘Any Blue Will Do’ Politics

The presidential candidate is a mirror image of Trump. 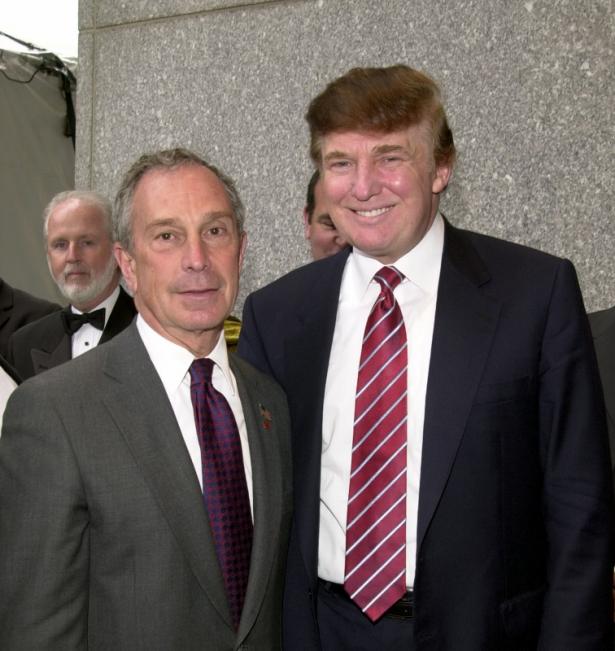 I have been on the record as saying that Michael Bloomberg will never become the president of the United States. The line I wrote in 2016 holds up: “An anti-teachers’-union, anti-gun, pro-nanny state, pro-Wall Street, pro-stop-and- frisk, pro-inequality, pro-immigration, pro-surveillance, pro-Iraq War neoconservative is almost surgically designed to repel practically every American voter on some level.” For that reason alone, the flirtation with making this guy the Democratic nominee should cause serious alarm to anyone who wants to defeat Donald Trump. Plus, Bloomberg has vowed to spend his money until November no matter who is the nominee, instantly undercutting the only real value of his candidacy.

But in the few months since Bloomberg announced, we have all gotten hard lessons in the power of money and advertising, the lack of principle within the professional political class, and the way in which the Trump ascendancy has broken the brains of so many Americans. There’s now a path for a general election campaign between dueling plutocrats, which would make a mockery of our politics and obliterate the Democratic Party as a tribune of the people.

And I’m going to say something controversial. There has been plenty of conjecture over whether a Trump-like figure could take over the Democratic Party. And I would say with Bloomberg that we’re about to find out. The cries of “Bloomberg is not Trump!” will rain down on me now, and, of course, he’s not. But there are a disturbing number of similarities. We have a figure without connections or the same value system as the party he seeks to represent, with racial and sexist skeletons in his closet, and a penchant for subverting democracy and showing contempt toward the rule of law. Democrats who are acting as pundits and thinking that Bloomberg offers the most certain close to the Trump era are playing with a stick of dynamite.

Let’s take these points in turn. Michael Bloomberg won his first term as New York City mayor as a Republican. He was a featured speaker at the Republican National Convention in New York in 2004, endorsing George W. Bush and the war on terrorism. He has supported numerous Republican candidates for office with tens of millions of dollars, including Scott Brown over Elizabeth Warren. He supported the state Republican Party in New York to keep them from attacking him over his party switch to independent while mayor.

Bloomberg opposed union contracts and public spending repeatedly in office, while favoring welfare for the rich to attract them to the city. Today he claims to be a liberal Democrat in favor of gun safety and climate preservation. He opposed minimum wage increases before and supports them now. The pattern is of someone choosing sides and deploying money to win favor, purely for political expediency. There’s no core there—just like Trump.

Under Bloomberg, the New York Police Department locked up thousands of people during that 2004 Republican National Convention for the crime of preparing to exercise their free-speech rights; the city later had to pay the protesters $18 million for violating their civil rights. This was part of a trend that continued with the mass arrests and paramilitary-style crackdown on Occupy Wall Street protesters, which included violence against reporters and photographers; the city had to settle a lawsuit with protesters again for using pepper spray on them. The NYPD under Bloomberg also spied on Muslims who had committed no crime, a program Trump has praised. Trump doesn’t control a municipal police force, but if he did, what Bloomberg carried out approaches what Trump’s response would look like. (Perhaps how ICE is run can offer an analogue.)

Bloomberg’s continually expressed ardor for the Chinese government—due in part to heavy Bloomberg investments in China—recalls the Trump Organization’s extension abroad and how it plays into foreign policy. Bloomberg has yet to divest from the giant news organization he has sidelined in the Democratic primary, or explain how he’d untangle from these many foreign relationships as president.

Bloomberg’s record of turning neighborhoods of color into stop-and-frisk surveillance zones is well known, though he has tried to lie about it anyway, claiming he reduced stop-and-frisk by 95 percent when he actually expanded it. Pressed on comments he made about how you have to put cops in minority neighborhoods to address crime, he said he made that statement “five years ago,” when he was a young and immature 73-year-old, I guess. These comments would not be out of place in a thread about Trump’s outrageous statements. In 2009. he successfully got city law changed to run for a third term, something Rudy Giuliani suggested after 9/11 but couldn’t himself pull off. Trump has mused about a third term as well; to paraphrase his ubiquitous campaign slogan, Mike got it done.

He got this done in part by seeding nonprofit charities that then supported the term-limit change with $60 million through his philanthropic fund. This is a persistent pattern in Bloomberg’s political life: buying off anyone who can be bought for their support or their silence. As journalist Blake Zeff documents, Bloomberg paid off pastors helpful to his mayoral candidacies, paid off members of Congress who are now backing him with millions in donations, and paid off mayors who have endorsed him with $350 million in city grant programs that filled budget holes. He has doubled the rate for campaign organizers and guaranteed them job security until November, catering their meals and giving them free swag. One by one, he’s buying off the political class ; Nathan Robinson quips, “I sometimes feel like being in the Ionesco play Rhinoceros, in which people unexpectedly become rhinoceroses overnight.”

This transactional, corrupt favor-trading is as unacceptable as anything we see in Trump’s Washington. It’s abetted by an orgy of spending unseen in modern political history, a corporate-run, corporate-marketed Potemkin village of a campaign (where the talking points are so road-tested they’re plagiarized). Bloomberg has perfected an unrebutted, unsoiled image outside the primary fray (“I'm not running against the other Democratic candidates,” he has said at his canned, catered events, “I'm running to beat Donald Trump”). It calls to mind television networks’ unfiltered broadcasts of Trump’s speeches in 2016, only Bloomberg, unlike Trump, is paying for the time. And unsurprisingly it works; corporations use advertising for a reason. At the same time that he’s deluging the airwaves with his own dollars, he’s also leaning on his pals in the plutocracy to starve competitors seeking big-money dollars. He’s paying Instagram influencers to say nice things about him, and paying meme-makers to boost his image. Fake social-media content to cultivate support? Mike will get it done.

Norms or rules don’t matter much to Michael Bloomberg. The Associated Press reported this week that Bloomberg blamed the end of redlining—a policy made illegal by the Fair Housing Act of 1968—for the housing bubble and 2008 collapse. To believe Bloomberg’s analysis, you would have to believe that housing discrimination ended in 1968, and then everyone waited for 35 years or so until government forced lenders to write loans to poor people. Sometimes this gets attributed to the Community Reinvestment Act, which was signed in 1977 and has the same inexplicable decades-long gap. Plus, countries around the world with far different policies on lending to the poor than those in the U.S. all coincidentally had housing bubbles and collapses at the same time. The “government caused the crisis” trope ignores the mountain of global hot money and global fraud from the banking sector that triggered the meltdown. Bloomberg’s ideological blinkers and his immersion in and support for his Wall Street milieu—given that his fortune comes directly from industry sales, you can say that he’s funded by Wall Street more than any candidate in American history—rendered him incapable of understanding the causes of the most fundamental economic event of the last 90 years. Not an encouraging harbinger of economic policy should Bloomberg become president.

Worse yet, Bloomberg didn’t think anyone should have been held accountable for the 2008 collapse and the Great Recession that followed. As mayor, he vetoed a measure to prevent predatory lending in New York and went to court to stop it after the city council overrode him. Then, he wanted post-crisis reforms to be written by the bankers themselves. And he found the Obama administration’s weak use of fines against bank misconduct (rather than criminal charges or real accountability) beyond the pale, saying they were “outrageous and shouldn’t be allowed to take place.” Believing that there’s a group of friends (and clients; leasing Bloomberg terminals is what made the man rich) who should be above the law—that’s as Trumpian as it gets.

The more parallels you can draw, the more disturbing it becomes. And while Bloomberg’s surge in national polling has enabled a little of his record to come to the surface, mostly he’s been allowed to run his campaign in a bubble, manufacturing his image as just a guy who wants to beat Trump. The preponderance of advertising itself plays another role: It demonstrates that Bloomberg will counteract Trump’s message with money, more than anyone else can muster. To some Democrats eager to grasp at any straw to see Trump’s reign ended, that notion is compelling.

I think it’s a tragic mistake. A plutocrat-on-plutocrat election will just further subvert our already fragile democracy. It will show that nothing matters in a democracy if you have enough money. It will take every comment that Democrats said about the GOP being seduced by Trump and boomerang it back in their faces. It is an act of pure desperation that will alienate giant swathes of the country and put a For Sale sign on democracy, perhaps permanently.

The “any blue will do” fallacy ignores that parties must stand for something to succeed. Over the years, losing touch with fundamental Democratic concerns has always weakened the party. Shacking up with a billionaire who undermines so many Democratic values because he might win in November? It reinforces the concept that everyone and everything associated with the Democratic Party can be bought.

Too many Democrats have spent the Trump era looking for a Republican “daddy” to rein in the toddler-in-chief and restore both Republican and American decency. From John Bolton and James Mattis to Jeff Flake and Mitt Romney, surely some conservative with courage and self-respect would step up and straighten things out. I think it would be a disaster to extend this delusion by actually nominating a Republican to lead the Democratic Party.

[David Dayen is the executive editor of The American Prospect. His work has appeared in The Intercept, The New Republic, HuffPost, The Washington Post, the Los Angeles Times, and more.]

Read the original article at Prospect.org.<prospect.org/politics/michael-bloomberg-candidacy-mirror-image-trump/>

Used with the permission. The American Prospect, Prospect.org, 2020. All rights reserved.