Darius Charney, who sued NYC for years, tells his side of the story 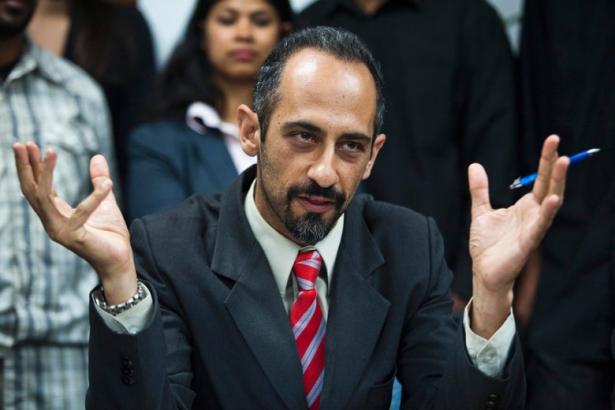 Darius Charney, senior staff attorney at the Center for Constitutional Rights, speaks to the media about the stop-and-frisk court decision during a news conference in New York on Aug. 12, 2013, Reuters/Eduardo Munoz

About a week before entering the presidential race, Michael Bloomberg, the billionaire former mayor of New York City, showed up for Sunday services at the Christian Cultural Center in Brooklyn. He offered an apology to the mostly black audience for having supported stop and frisk—the notorious policy that allowed police to question and search New Yorkers, even when they were doing nothing wrong—during his mayoral term.

When Darius Charney saw this speech, he was skeptical of Bloomberg’s remorse. Starting in 2008, he and his colleagues at the Center for Constitutional Rights had spent five years suing the city of New York for its use of stop and frisk. They eventually won the case, but Bloomberg fought them bitterly right up until the end of his mayoral term.

Charney told me the stop-and-frisk story from his perspective on Tuesday’s episode of What Next. Our conversation has been edited and condensed for clarity.

Mary Harris: Stop and frisk is a policing tactic that’s been around a long time. A Supreme Court ruling actually allows it under certain circumstances. But data from the NYPD shows the practice skyrocketed when Mayor Bloomberg came into office. How did he work with Ray Kelly, the NYPD chief, to change the way stop and frisk was being implemented?

Darius Charney: When Bloomberg first entered office in 2002, the NYPD recorded about 92,000 stop-and-frisk encounters. By 2011, his 10th year in office, that number had ballooned to almost 700,000. Meanwhile, crime in the city continued to go down.

Along with that, you see Kelly and his senior leadership in the NYPD putting out a message that stop and frisk needs to be a primary crime-fighting strategy for the officers. They said that in writing. They told supervisors that one of the criteria they needed to use to evaluate officers is: How many stops are they doing?

What was stop and frisk meant to stop?

What the NYPD and Bloomberg and Kelly all said is: We’re going to use it to get guns off the street. We have almost 20 years of data—they almost never found a gun when they stopped people. As a strategy for recovering illegal weapons, it was a miserable failure.

Tell me about your lawsuit.

Our original four plaintiffs were four black men of varying ages from different parts of New York City. Our lead plaintiff, David Floyd, was at that time a twentysomething student at City College in Harlem. He had been himself stopped and frisked by officers in the Bronx on two occasions. The second time, he was literally stopped while putting keys into the door of his neighbor’s apartment. His neighbor had gotten locked out of the house. The police came up on him. They patted them down. They went through their pockets.

Why did these men want to get involved in this suit?

They all told us similar stories. They said, we want this to stop this from happening to us and to our friends and loved ones. And I will never forget when David Floyd testified the first day of the trial. He was asked, how does it make you feel to get stopped like this? And he said, it really makes me feel like I am not free to move around this city.

An audio recording that surfaced recently shows how Bloomberg thought about stop and frisk when he was still defending it back in 2015. You’ve got to get the guns out of the hands of the people that are getting killed, Bloomberg said back then. The idea was: Send cops to minority neighborhoods and search people. Why do we do it? he asked. Because that’s where all the crime is.

That was actually his explanation in 2013. We had heard testimony during the trial in our case from Eric Adams, who’s now the borough president of Brooklyn. He’s a former NYPD captain, and he testified that Kelly told him to his face: We go to the high-crime areas. We had a social scientist at Columbia look at this, and he testified in court. He kind of took the NYPD at its word and said: You’re saying you go to high-crime areas. Since that’s where your cops are, then naturally they’re going to stop people in those neighborhoods the most. And who lives in those neighborhoods? Black and Latino kids. He looked at that and he controlled for two things: crime and officer deployment. What was the single strongest predictor of who gets stopped and where stops happen? Race.

“Bloomberg called the judge biased. He said she did not know anything about how policing works in New York City.”

A self-fulfilling prophecy, as the judge called it. One of our plaintiffs lived in southeast Queens, and he was stopped and frisked on a winter evening. One of the reasons the officer gave was, I observed him in a high-crime area.

He observed the plaintiff in a high-crime area and noticed a bulge in his jacket, which was a cellphone. And keep in mind, this is in the middle of the night. I don’t know how he saw a bulge.

The cop was cross-examined in court. He was asked, how is southeast Queens a high-crime area? And his answer was, there was a robbery pattern in the neighborhood. Queens is the largest borough by landmass in New York City. That robbery pattern was three or four robberies over the course of the prior month, all of which were committed by black men. That was what made this neighborhood, in his view, a high-crime area.

When she eventually ruled, Judge Shira Scheindlin didn’t overturn stop and frisk, but she said it was being applied overwhelmingly against black and brown New Yorkers, and that was unconstitutional. She appointed a monitor to oversee the use of stop and frisk by the NYPD, and recommended that police wear body cameras. How did Bloomberg respond to this decision?

He called her biased. He said she did not know anything about how policing works in New York City. And the city appealed the ruling.

By November 2013, Bloomberg knew two things: He knew Bill de Blasio was going to be the next mayor, and he knew that the appeals court had already set a schedule where his appeal would not be argued and heard until February 2014 at the earliest, when de Blasio would already be in office. So Bloomberg had his lawyers file a motion to try to take that ability to drop the appeal away from de Blasio, and he demanded a rushed decision by the appeals court. But the appeals court said it wasn’t going to rush this through. Once that happened, Bloomberg couldn’t do anything else. De Blasio came in, and at the end of June, he dropped the appeal.

What did we learn once stop and frisk had plummeted to extent it has now?

I think what we learned is that, contrary to what Bloomberg and Ray Kelly said, crime did not go up and chaos did not ensue. I think I can truthfully say that stops have gone down 95 or 97 percent during de Blasio’s time in office, yet crime has not spiked. Which shows us again that stop and frisk was not really having much of an impact on crime in New York City, but it was having a very damaging effect on the relationships between the police department and communities of color in New York.

As part of the ruling, there’s someone overseeing stop and frisk now. Does that mean accountability is there?

Yes and no. I think it’s there in that the NYPD has to, on a regular basis, report to this federal monitor about how things are going. The monitor’s team will go to observe the NYPD trainings and review its policies and data. The racial disparities actually have not improved at all even since the time of trial, which is the biggest concern.

That seems alarming. That was the whole reason for the decision.

I’m not blaming any particular person or group of people, but we don’t feel like the racial profiling aspect of the court decision has been meaningfully dealt with yet. I think we still have a lot of work to do on that.

Mary Harris is the host and managing editor of What Next, Slate's new daily news podcast. She has reported throughout the public radio system, for NPR, Marketplace, and WNYC. Twitter.