For Those Living in Public Housing, It’s a Long Way to Work 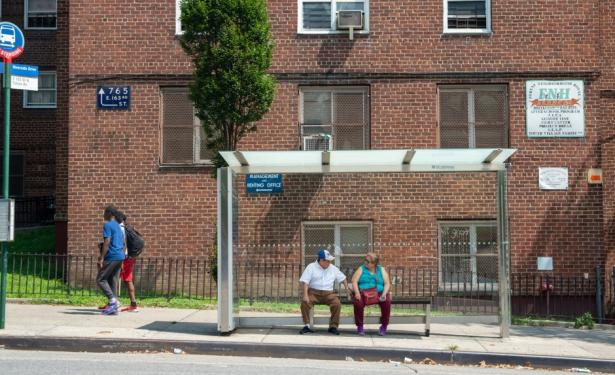 Let’s say there are two people in Atlanta who need jobs. They poke around on Snagajob, a job-search site for hourly work that lists hundreds of thousands of jobs in 300,000 locations. They scroll through listings for FedEx delivery driver, or shift manager at Wendy’s, or lot associate at Home Depot. But one job seeker lives in a public housing development, and the other doesn’t. According to a new Urban Institute report, their odds of finding work close to home might look very different.

Using job listing and applicant data collected in 2015 by Snagajob, researchers cross-referenced available jobs posted in 16 metro areas with the number of applicants who lived within a “reasonable commuting distance” from the jobs in question. (Here, “reasonable” is defined as one being within 6.3 miles of each zip code’s population-weighted center; though Snagajob is just one platform, U.S. Census Bureau figures suggest that in the 16 metros researchers studied, it accounted for 13% of recent new hires.) Then they compared that difference for those who used federal housing assistance, like public housing, Housing Choice Vouchers, or Section 8 rental assistance, and those who didn’t.

Depending upon which zip code they call home, researchers found that the average person using some form of government housing aid is likely to face tougher odds of getting a job near their neighborhood than the average job seeker who isn’t using assistance, even those who are extremely low-income. “In fact, the average assisted household is surrounded by 6,032 more nearby Snagajob seekers than Snagajob postings, compared with 3,056 more for unassisted, extremely low–income households — nearly double the amount,” the report reads.

Of all assisted households, those living in public housing had the biggest difference between the number of job seekers and the number of jobs nearby; next came housing choice voucher, or HCV, recipients. 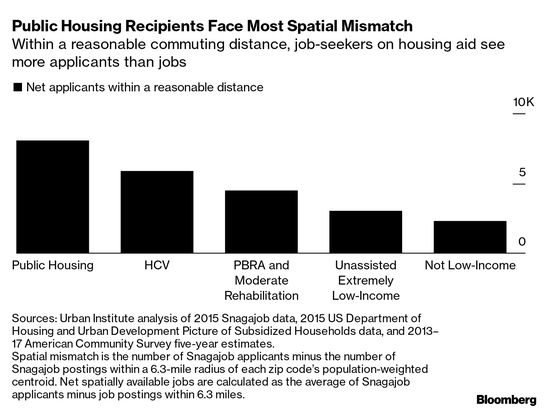 These outcomes weren’t totally intuitive, says Christina Stacy, a senior research associate in the Metropolitan Housing and Communities Policy Center at the Urban Institute and the lead author of the report. “You’d think public assisted, federally supported rental housing might help people live closer to available jobs, and maybe live in places they might prefer, that have more opportunity,” she said. But landlords have long discriminated against voucher holders, and public housing has historically been sited in neighborhoods far from opportunity. Though some lower-income families experience frequent, and often turbulent, residential moves, they often lack the ability to choose when, how, and to where those moves happen. As a result, more families on housing assistance may end up living in places where fewer businesses are looking to hire nearby, and where there’s more competition for the spots that exist.

That’s not true everywhere. While New York City, Miami and L.A. show pretty much everyone in every zip code contending with more fellow job seekers than open job listings — with the worst gaps appearing for those who live in assisted housing — Minneapolis, San Francisco and Boston are trending in the opposite direction. There, nearby jobs exceed the number of people who want to fill them. 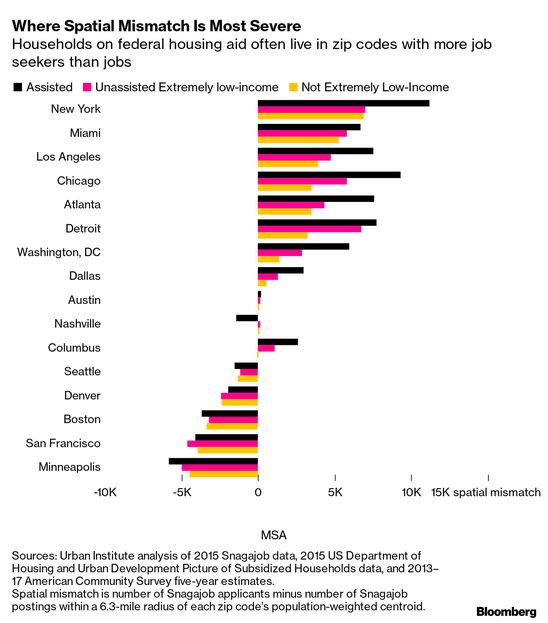 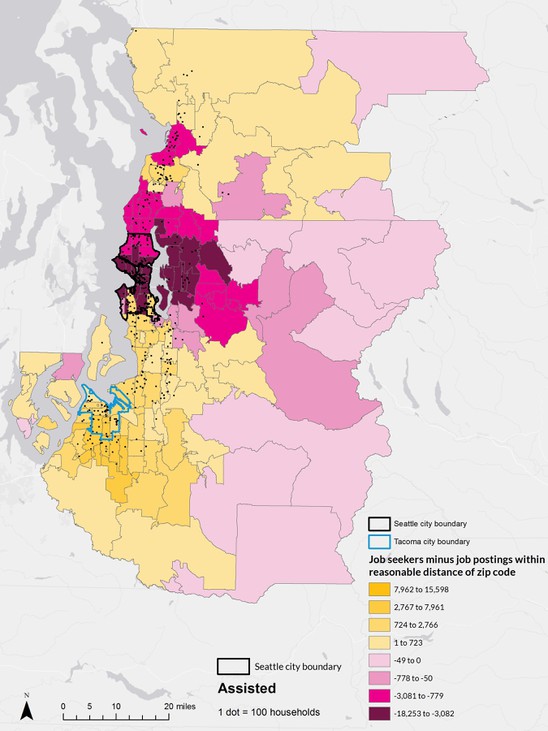 Spatial mismatch was first understood as a phenomenon that increases racial divides, limiting economic prospects for segregated, majority-black neighborhoods. Though job applicants’ race wasn’t recorded on Snagajob or analyzed as part of these maps, among subsidized households, people of color are disproportionately represented.

Proximity to jobs isn’t the only thing that makes a neighborhood worthy of settling down in, of course. Access to good grocery stores, health care, schools, family and friends could all rank higher on anyone’s priority list. But research shows that, particularly for hourly or low-wage workers, spatial mismatch can increase rates and lengthen spells of unemployment. Employers lose out, too, if they can’t find enough staff.

Scoring high on the spatial mismatch scale doesn’t have to preclude workers from bridging those divides and finding a great job in another neighborhood anyway, though. Good public transportation — and affordable housing built near it — can turn an unreasonable commute into a reasonable one. A journey of 6.3 miles in the Bay Area, for example, could mean a two-stop BART ride from Oakland into San Francisco’s Financial District; in Atlanta, that same 6.3 miles across the city could take up to an hour by bus.

The study didn’t account for the connectivity dimension, though Stacy says further research will try to. And the fact that their jobs data is from five years ago, before the U.S. experienced today’s record-low unemployment levels, is another important caveat — though the caveat to the caveat is that, for black Americans, the rate is still twice as high as for white Americans on the national level, as it has been for decades.

Still, creating more housing that’s both affordable and accessible to jobs is an urgent goal in increasingly pricey cities like New York and L.A. To achieve it, Stacy suggests targeting higher levels of housing choice voucher assistance in job-rich areas, enforcing anti-discrimination laws against landlords that deny voucher holders from renting, and consciously locating new public housing in job-rich neighborhoods. Focusing public transportation improvements on areas that are home to job seekers would go a long way, too.