As femicide continues to plague the world, we must continue to fight the systems that are complicit in their acceptance of it and for the families demanding justice for their loved ones. 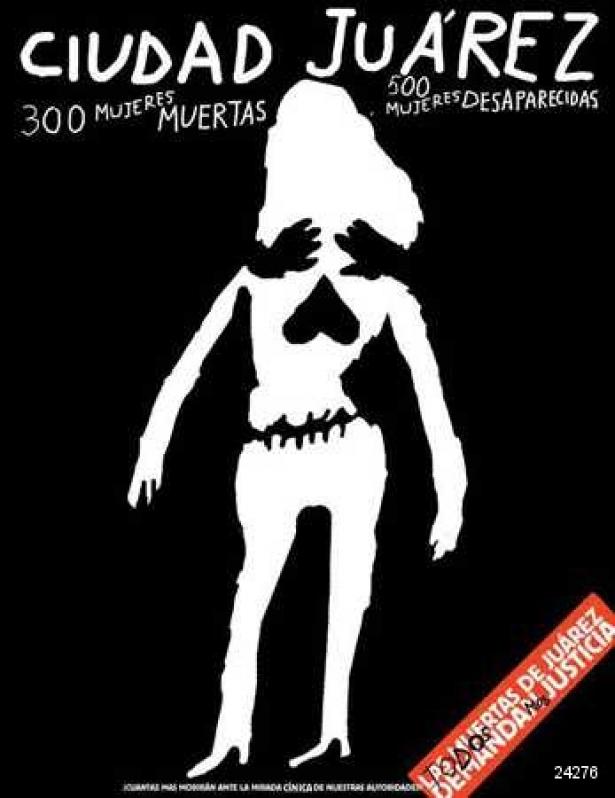 Ciudad Juárez 300 Mujeres Muertas 500 Mujeres Desaparecidas,Alejandro Magallanes
Ciudad Juárez 300 Mujeres Muertas 500 Mujeres Desaparecidas
Alejandro Magallanes
Digital Print, 2003
Mexico City, Mexico
24276
Isabel Cabanillas de la Torre was murdered on January 24, 2020, while on her way home. She was a mother, artist, and a women’s rights activist in Juárez, Mexico, one of the most dangerous places in the world for women. Isabel was part of the artist and feminist collective, Hijas de su Maquilera Madre, Daughters of Maquila Worker Mothers, who continue to organize actions to remind people of what happened to Isabel and other women in Juarez. After Isabel’s death, her community immediately organized and held protests, demanding justice and accountability from the police for her and all others who have been victims of violence.
Since 1993, hundreds of women in the Mexican bordertown of Juárez have been kidnapped, raped, murdered, and grotesquely maimed. Juárez’ long and violent history has been blamed on gangs, drug trafficking, and a toxic masculine culture that allows these deaths to continue. Many are convinced that members of the government, police, and drug lords are involved, and that it is connected with the North American Free Trade Agreement. NAFTA went into effect January 1, 1994, and many young women came from small towns in order to work in the factories or maquiladoras, built along the border.
After years of official apathy and police incompetence towards solving and ending these brutal murders, a group of graphic designers from Mexico City invited colleagues to express their concern and outrage by designing posters around the slogan The Women of Juárez Demand Justice! / ¡Las Muertas de Juárez Demandan Justicia! The poster shown here is one of 60 large-format digital images that traveled throughout Mexico, educating about the murders and forcing the authorities to become involved.
As femicide continues to plague the world, we must continue to fight the systems that are complicit in their acceptance of it and for the families demanding justice for their loved ones.
Sources: Mexican Artist and Women’s Rights Activist Murdered in Downtown Juárez
Subscribe to Portside