books The Populist’s Guide to 2020, A New Right and New Left are Rising

The authors provide an easy to read analysis of what the authors have identified as signposts for the current realignment of the political forces underway as we head toward 2020 presidential election. 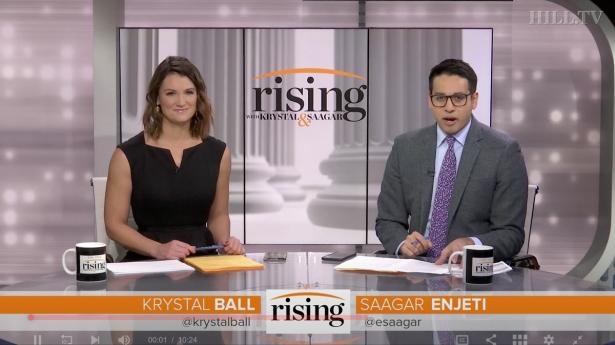 The Populist’s Guide to 2020, A New Right and New Left are Rising, by Krystal Ball and Saagar Enjeti, hosts of a daily morning show The Rising at The Hill, challenges the status quo politics of the mainstream media. It provides an easy to read analysis of what the authors have identified as signposts for the current realignment of the political forces underway as we head toward 2020 presidential election. Rejecting corporate talking points, embracing anti-corporate themes, and hosting guests with on-the-ground knowledge from all the campaigns, The Rising podcast uses the Democratic primary race as their vehicle. Ball and Enjeti, who both have media experience, have enjoyed rapid success. The podcast, launched in 2019, now has over 285,000 subscribers. Since its launch they have closely examined the Democratic Party primary process, including speeches, platforms, and debate performances, standing in the polls and candidates’ relationship to each other in order to assess the degree to which the Democratic candidates reflect or reject what they see as the new upsurge in grass roots working class politics driving today’s movements.

Although Ball, a progressive, and Enjeti, a conservative, approach events from different vantage points they both agree that the formation of a multi-racial, multi-generational working class led coalition is central to fixing what’s wrong with our current politics, and see the necessity for this transition taking place in both the Democratic and Republican parties. Their goal is a heady one, “to challenge conventional wisdom and shift both parties to work in the interest of the working class instead of their current masters.”

The book is a collection of their most notable essays organized in short easy to read chapters with an up-to-date introduction to each essay, with essays tying the chapters together into a very coherent and convincing narrative. There are four main sections that provide a broad overview of what ails us: Core Rot, Media, Identity and Theories of Change.

For example, in Core Rot the authors each contribute to their assessment that our politics are warped, dominated by big business and not serving the interests of the working masses. Both are critical of the corporate dominated neo-liberal establishment that in their view is in firm control of the levers of power in both the Democratic and Republican parties. Krystal points to the opioid crisis, the upsurge in teenage alcoholism, our hollowed out industrial cities and towns and the loss of millions of good paying union jobs as the cause of the decline in life expectancy and increased desperation that millions of workers are suffering from. One principal cause she identifies in this decline is the deep failing of the Democratic Party to stand up for the interests of the working class as exemplified in last year’s vote to add $80 billion dollars to the military budget at the same time that Democrats were prosecuting Trump for impeachment. She accurately points out that the failures of the Democratic Party have left it with “no legitimacy to prosecute a moral case against President Trump.” While Ball takes a more internationalist perspective connecting the world-wide demonstrations against neo-liberalism to increased political activity and consciousness in the U.S., Enjeti is no less forceful in his defense of working class interests. He rails against the libertarian and corporate dominated politics that has captured the Republican Party. In his view, in the broader economy “Woke Corporatists”, corporations that focus on identity politics while carrying out an economic policy that internally gutted our industrial base, are nothing but wolves in sheep clothing, diverting and confusing working people from fully understanding how corporate dominated politics are destroying the working class and American families. Enjeti is very critical of the hypocrisy of “social-justice-obsessed aristocracy within the media, government and the establishment Democratic Party” during the Obama administration that failed to hold the billionaire class responsible for financial crisis of 2008.

The Media section essays critique the mainstream media’s penchant for missing the stories that mean the most to working class people. Why does the corporate media, including the liberal MSNBC, seem to have an agenda apart from the burning issues of day like growing militarization of the police, the rise of white supremacy, catastrophic climate change and increasing toxic pollution, a bloated military budget and growing homelessness? In Enjeti’s view “[C]orporate and oligarchical control of the media causes these institutions to consistently cover for powerful people, to bash or repress working-class movements and obsessively chase the stories that most titillate their affluent cosmopolitan consumers.” Ball’s experience at MSNBC exemplified how ideological and biased even its liberal coverage is. In her view this bias is rooted not in a conspiratorial view of the media, but rather on the reality that natural defense mechanisms work to shade coverage to toward those whose agendas don’t threaten, pointing to Ronan Farrow’s difficulties at NBC in his investigation of Harvey Weinstein and Jeffrey Epstein’s ability to travel in elite circles for years while carrying on his sexual exploitation of minor girls.

In Identity, Ball and Enjeti highlight with deep skepticism and disdain those forces in the media, corporate, cultural and political world have on the economic wellbeing of regular working people. They rail against the elites who “fixate” on issues of race and gender in isolation of class and use them as tools to distract from “the war-making and economic rigging” that we see around us. They update their analysis with current examples. In one essay Krystal talks of the media flurry created when Representative Alexandria Ocasio-Cortez endorsed Bernie Sanders. White feminists asked how AOC could endorse a 78 year old white man when Elizabeth Warren, and Kamala Harris, a black woman were in the race? In another Saagar juxtaposes Elizabeth Warren’s retreat on Medicare-For-All with her pledge to wear a pink Planned Parenthood scarf during her inauguration. Other examples are critical of what is characterized as Kamala Harris’s cynical identity politics ploy, the media’s smearing of Tulsi Gabbard and its failure to acknowledge the historic election of Kentucky’s first black Attorney General. These are recent examples of our long and sordid history of class divisions in the service of corporate domination.

In the Final section Theories of Change the essays expound on the questions of how and what will bring about the transformative change that people are so desperately seeking. Can we make the kind of sweeping changes like those carried out in the past that will result in a political realignment of power? They look back at Obama’s victory and the unprecedented grass roots movement for change he created, and identify those forces and events which stalled the trajectory from the dismantling of his Organizing for America to the selection of finance friendly Clintonites for the cabinet. They point to Donald Trump’s trajectory of an outsider as a model for another more progressive brand of politics that genuinely represents the honest grass roots forces seeking to restore a sense of justice, equality and fairness to our economy and society writ large. They see the candidacy of Bernie Sanders as following a similar path as an outsider with a strong independent committed base of support but with students and the working class as its pillars. They are unabashed in their view that the campaign of Bernie Sanders represents those constituents of the multi-racial, multi-generational working class centered politics that has the capacity to carry out the kind of transformational change that so many of us so desperately say we want. Although this book will not make “Vote Blue No Matter Who” Democrats happy, it does provide a very insightful guide to anyone who is interested in understanding the candidates and their positions on the issues facing the working class today. If you are a political junkie, you will love this book.