For those who live in the shadow of segregation and racial terror, the election is not about policy or personality. It’s about something much darker. 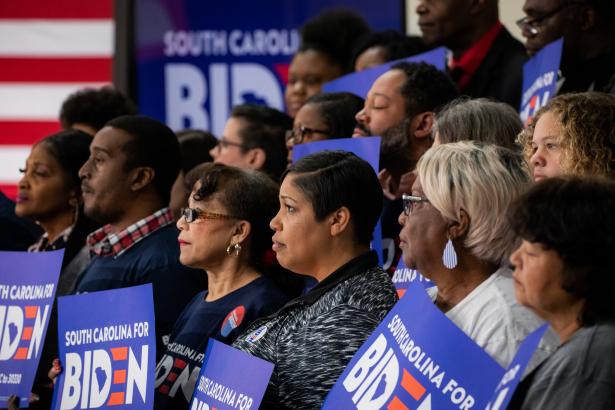 At the Lorraine Motel in Memphis, where Dr. Martin Luther King Jr. was assassinated in 1968, things look much as they did a half-century ago.

The site is now home to the National Civil Rights Museum, a remarkable collection that includes a replica of a firebombed bus ridden by the Freedom Riders as they traveled through the South protesting segregation in 1961.

Inside the museum the other day, a woman sat down beside me and wiped away tears. “I’m sorry,” she said. “What gets me is, after all this time, look what’s happening right now.” 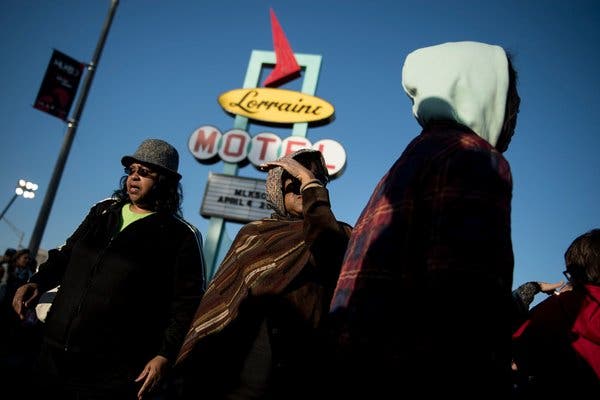 Visitors to the Lorraine Motel after a ceremony in 2018 marking the 50th anniversary of the assassination of Dr. Martin Luther King Jr.Credit...Brendan Smialowski/Agence France-Presse — Getty Images

Southern Democrats — particularly black Democrats — are hoping to keep the history that surrounds them in the past.

Representative Jim Clyburn of South Carolina explained this in visceral terms when he announced his support for Joe Biden late last month, an endorsement that began with Mr. Clyburn, 79, talking about the first time he was arrested protesting for civil rights decades ago. “When I sat in jail that day, I wondered whether we were doing the right thing, but I was never fearful for the future,” he said. “As I stand before you today I am fearful of the future of this country. I’m fearful for my daughters and their futures, and their children, and their children’s futures.”

Mr. Clyburn said he was sure Mr. Biden was the right choice. “I know Joe. We know Joe. But most importantly, Joe knows us,” he said. Three days later, Mr. Biden won a convincing victory in the South Carolina primary, launching him into his Super Tuesday triumph and the front-runner status he enjoys today.

My friends in New York, many of them Elizabeth Warren or Bernie Sanders supporters who see Mr. Biden as deeply uninspiring, were mystified. But after traveling through the South this past week, I began to understand. Through Southern eyes, this election is not about policy or personality. It’s about something much darker.

Not long ago, these Americans lived under violent, anti-democratic governments. Now, many there say they see in President Trump and his supporters the same hostility and zeal for authoritarianism that marked life under Jim Crow.For those who lived through the trauma of racial terrorism and segregation, or grew up in its long shadow, this history haunts the campaign trail. And Mr. Trump has summoned old ghosts.

“People are prideful of being racist again,” said Bobby Caradine, 47, who is black and has lived in Memphis all his life. “It’s right back out in the open.”

In Tennessee and Alabama, in Arkansas and Oklahoma and Mississippi, Democrats, black and white, told me they were united by a single, urgent goal: defeating Mr. Trump this November, with any candidate, and at any cost.

“There’s three things I want to happen,” Angela Watson, a 60-year-old black Democrat from Oklahoma City, told me at a campaign event there this week. “One, beat Trump. Two, beat Trump. And three, beat Trump.”

They were deeply skeptical that a democratic socialist like Mr. Sanders could unseat Mr. Trump. They liked Ms. Warren, but, burned by Hillary Clinton’s loss, were worried that too many of their fellow Americans wouldn’t vote for a woman.

Joe Biden is no Barack Obama. But he was somebody they knew. “He was with Obama for all those years,” Mr. Caradine said. “People are comfortable with him.” Faced with the prospect of their children losing the basic rights they won over many generations, these voters, as the old Chicago political saw goes, don’t want nobody that nobody sent.

Mr. Biden understands this. “If the Democrats want a nominee who’s a Democrat — a lifelong Democrat! a proud Democrat! an Obama-Biden Democrat! — then join us!” he told voters in South Carolina in his victory speech. 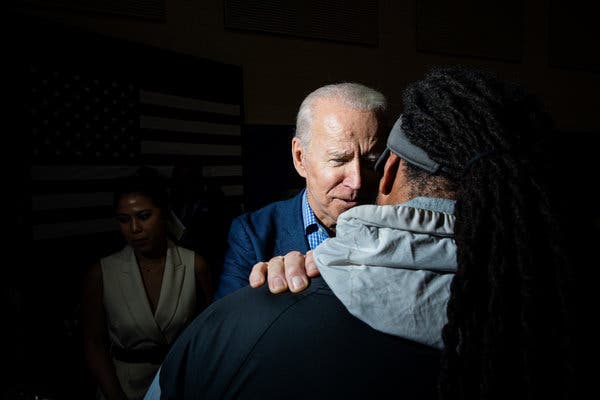 Despite enormous progress, poverty in this still largely rural region, for Southerners of every race, remains crushing.

Confederate flags proudly paid for by the Sons of Confederate Veterans dot the highways.

In Memphis last week, steps from the campaign trail, hundreds gathered across town for the 68th annual Mid-South Farm & Gin Show. Inside a massive convention hall, white Southerners mingled amid the giant steel claws of farm equipment and cardboard cutouts of Donald Trump and Mike Pence. At one booth, vendors sold a shirt that read, “Make Cotton Great Again.”

“The past is never dead,” as the Mississippi novelist William Faulkner wrote in “Requiem for a Nun.” “It’s not even past.”

Faulkner was on my mind when I picked up the keys to a rental car in Memphis, for the long drive to Selma, Ala. Along the way, I stopped for breakfast in Olive Branch, Miss., where I met a man named Dave Wright. His grandfather, Leonard Wright, was William Faulkner’s physician. “Faulkner wrote about Granddaddy. Granddaddy didn’t like what he said, but it was all true,” Mr. Wright told me. He stopped there. 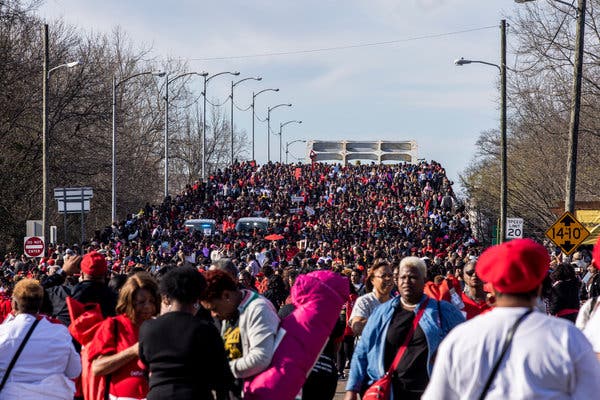 A sea of marchers crossed the Edmund Pettus Bridge in Selma, Ala., on Sunday.Credit...Brittainy Newman/The New York Times

On Sunday, I marched across Selma’s Edmund Pettus Bridge with thousands, an annual exercise in remembering that draws Americans from all walks of life. In 1965, police attacked civil rights protesters here in an event that came to be called Bloody Sunday.

This year, the Democratic presidential candidates joined. So did Bob Smith, an older black man, who stood at the edge of the crowds holding a sign. “I was here in 1965, pistol whipped and kicked by police,” it read.

When I asked him about it, Mr. Smith smiled. “Yeah, I was here all right. Got the crap kicked out of me, too!” he told me with an easy laugh.

The march began and the Edmund Pettus Bridge, a dull block of concrete named for a Confederate brigadier, was suddenly flooded with life. Choirs sent the sounds of gospel high into the thick Alabama air. Drummers walked the route alongside school groups, and church groups, and black sorority women in their pink and green regalia. Parents carried young children on their shoulders, hoping to catch a glimpse of the presidential candidates. “This is better than Mardi Gras,” Sharon Holmes, of Pontiac, Mich., told me.

At the crest of the bridge, hundreds stood with their faces to the warm Southern sun, breathing it all in.

Together, they are determined to hold on to a country that was paid for 55 years ago in blood. In the South, as in the rest of America, that may be a hard thing to do.

Mara Gay is a member of the New York Times editorial board.