On International Women’s Day, Say No To Drafting Women – Or Anyone!

Yet there’s one peculiar effort toward fake equality that must be vehemently opposed by feminists of all genders . . . drafting women – or anyone – into the US military. 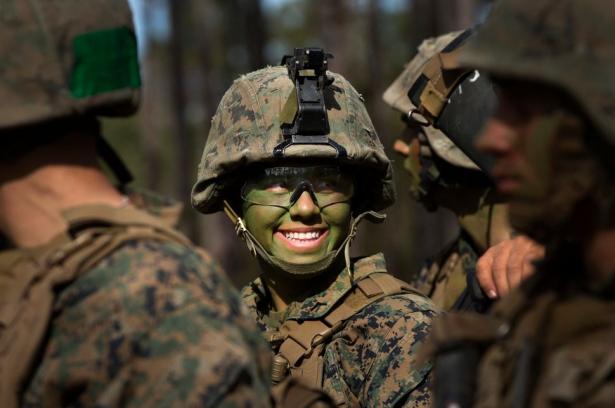 March 8th is International Women’s Day. It’s a day to work for women’s equality in all sectors of our world. Yet there’s one peculiar effort toward fake equality that must be vehemently opposed by feminists of all genders . . . drafting women – or anyone – into the US military.

On March 26th, the National Commission on Military, National, and Public Service will issue a recommendation to Congress on whether to expand the US military draft and draft registration to women – or abolish it for everyone. Their report is several years in the making, and was triggered when the male-only US military draft and draft registration was ruled unconstitutional by the courts. On March 26th, we’ll discover whether they think women’s equality means having to live in equal terror of the scourge of the military draft, or if they have the rare foresight to assert that people of all genders should regain/retain their freedom from conscription.

It is important to be clear that women’s equality cannot be won through conscription. It cannot be gained through drafting us into the illegal, immoral, unending wars launched by the US government.  War is an abomination that causes unequivocal harm to women, their children, and their families. War destroys homes. It bombs children. It destabilizes economies. It causes hunger, starvation, disease, and displacement. We cannot bomb our way into global women’s equality – if nothing else, the travesty of wars in Iraq and Afghanistan have shown that all too clearly.

It is not war, but peace that supports women’s rights. The processes of waging peace – not militarism – have been shown to advance gender equality. Women are some of the world’s greatest advocates and makers of peace. Repeated studies have shown that women are pivotal for peace efforts’ success. When higher percentages of government officials are women, the rates of working for peace, instead of war, increase.

For those reasons alone, on International Women’s Day, we should all be demanding that the US government abolish the military draft and ensure freedom from conscription for all genders.  Drafting women into the US military is a false equivalency – one that has deadly consequences around the world and negatively impacts women’s rights in any country where war and militarized violence are present. Women should not be drafted into the grave injustices of the US military. We should organize to liberate our brothers and non-binary fellow citizens from the specter of the draft.

As CODEPINK put it:

Women’s equality will not be achieved by including women in a draft system that forces civilians to participate in activities that are against their will and harm others in large numbers, such as war. The draft is not a women’s rights issue, as it does nothing to advance the cause of equality and functionally limits freedom of choice for Americans of all genders. While we demand equal pay for women in all areas of our economy, it is irresponsible for the fight for women’s rights to seek equal moral injury, equal PTSD, equal brain injury, equal suicide rates, equal lost limbs, or equal violent tendencies that military veterans suffer from. When it comes to the military, women’s equality is better served by ending draft registration for everyone.

There are numerous reasons why the military draft system is entirely unnecessary for US defense, why it’s immoral, why it’s dysfunctional, why it won’t slow or stop wars, and so on.  A bill is currently being introduced to the US Congress that would abolish military conscription for all genders. Supporters can sign the petition here.

In a time of “Forever Wars,” it is more important than ever that the advancement of women’s rights proceed hand-in-hand with the efforts toward peace and demilitarization.  War and violence wreak havoc on women’s rights and well-being around the globe.  While a recent spate of “woman warrior” films glorifies the violence-wielding, gun-toting female assassins and soldiers as a form of “empowered women”, the reality is that war is horrific. Women – and their children and families – suffer horribly. No feminist of any gender should advocate war or militarism as a form of women’s advancement.  It comes at the steep price of an industry that automatically diminishes the safety and well-being of everyone it encounters.

The slogan of International Women’s Day 2020 is #EachforEqual, meaning that each one of us must work for equal rights. As we do so, we must speak up for the truth that equality for all women around the world is found not through the shallow concept of drafting US women alongside young men. It can only be found by abolishing military conscription for all genders, demilitarizing, and ending war.  Peace is the greatest advocate of equal rights for all genders.  As feminists, as women, as mothers and daughters, sisters, friends, and lovers, we must make waging peace an unshakeable pillar of our work for women’s rights.

Rivera Sun has written numerous books, including The Dandelion Insurrection. She is the editor of Nonviolence News and a nationwide trainer in strategy for nonviolent campaigns. She is on World BEYOND War’s advisory board and is syndicated by PeaceVoice,