Covid-19: The Path to Treatment and Prevention

An international consortium is racing to test three possible antiviral treatments for Covid-19 and 10 different vaccines. No one of these experiments is guaranteed to succeed, but the chances of finding one that will are high.

Scientific research on the novel coronavirus has progressed at unprecedented speed,Mongkolchon Akesin / Shutterstock

Just three months after China first notified the World Health Organization about a deadly new coronavirus, studies of numerous antiviral treatments and potential vaccines are already underway. Never has science advanced so much in such a short period of time to combat an epidemic.

Many of the proposals now under study come from research groups that have spent years working to combat similar coronaviruses, particularly SARS and MERS. All that accumulated knowledge has allowed scientists to advance at unprecedented speed.

We know, for example, that the genome of the novel coronavirus, called SARS-CoV-2, is 79% like that of SARS. We know the “key” used by the virus to get into human lung cells is protein S and that the “lock” in the cell is the ACE2 receptor. We also know that the entry of the virus is facilitated by a protease, or an enzyme that breaks down proteins, from the cell itself, called TMPRSS211.

Other SARS-CoV-2 genes get to work once the virus is inside the lung cell: the genes for RNA polymerase (RdRp), an enzyme that replicates the virus genome, and for C3CLpro and PLpro proteases, which are involved in the processing of viral proteins. These genes are likewise very similar to those of SARS.

These details are important. Understanding the biology of SARS-CoV-2 – and how it resembles or differs from other deadly viruses – facilitates the design of antiviral drugs to treat the disease and vaccines to prevent it. 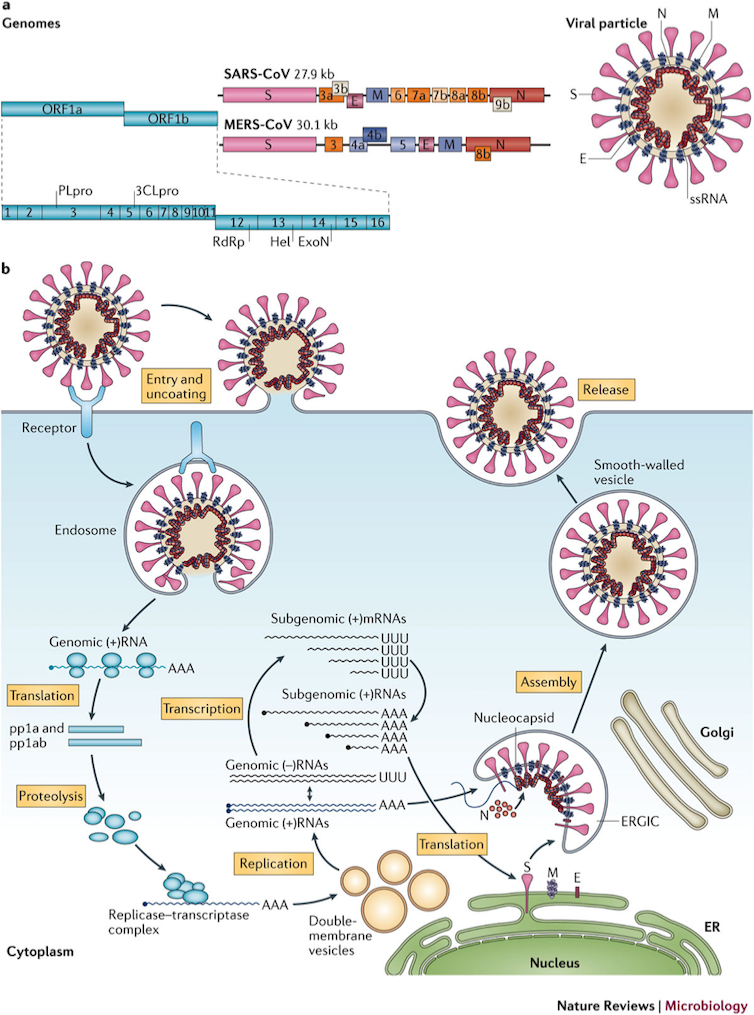 Genome, structure and replication of the SARS and MERS coronaviruses. Nature

Chloroquine, hydrochloroquine and other virus blockers

Chloroquine has been used for years against malaria. This cheap and widely available drug is also a powerful antiviral, meaning it blocks a virus from entering human cells. Several research groups, including one at the University of Minnesota, are now studying whether it is effective in reducing the viral load in patients with SARS-CoV-2.

Some enveloped viruses, such as SARS-CoV-2, enter the cell by endocytosis – a cellular process in which substances are brought into the cell – forming a small vesicle. Once inside, a drop in pH promotes the fusion of the virus envelope with the membrane of the vesicle that contains it, in order to be released into the cytoplasm.

Chloroquine prevents this drop in pH, inhibiting the fusion of the membranes and thus prevent the passage of the virus to the cell cytoplasm. Hydroxychloroquine, a less toxic derivative of chloroquine, has already been found to inhibit the replication of SARS-CoV-2 in vitro in cell culture.

Researchers are also testing Barcitinib, an anti-inflammatory drug approved to treat rheumatoid arthritis, which may also inhibit endocytosis of the virus. Another drug they are testing is camostat mesylate, a drug approved in Japan for use in treating inflammation of the pancreas, which has been shown to block the entry of the SARS-CoV-2 virus into lung cells.

Remdesivir and other viral analogues

One of the most promising antiviral treatments for SARS-CoV-2 is called remdesivir, which has been used successfully against SARS, MERS and Ebola. Remdesivir is nucleotide analogue, a major class of anti-cancer and antiviral drugs that prevents the virus from multiplying within the cell. At least 13 clinical trials are already underway in China and the United States to see if remdesivir may stop SARS-CoV-2.

Another wide-spectrum viral RNA polymerase inhibitor that has already started clinical trials is called favipiravir, already an approved flu treatment. The first results with 340 Chinese patients have been satisfactory, reducing the number of days coronavirus patients were sick.

Some scientists have suggested that a combination of the drugs ritonavir and lopinavir – compounds used to treat HIV – may also inhibit SARS-CoV-2 proteases, or enzymes that break down proteins. Lopinavir is a virus protease inhibitor that breaks down easily in the patient’s blood. Ritonavir is administered with lopinavir to protect it from breaking down.

A recently published article detailing the results of a study of 199 patients shows that the ritonavir/lopinavir treatment is not effective against coronavirus.

At least 27 other clinical trials with experimental combinations of different antiviral treatments – such as interferon alfa-2b, ribavirin, methylprednisolone and azvudine – are now underway.

The World Health Organization highlights at least 41 proposed vaccines for testing against coronavirus. Vaccines are a prevention strategy. If they are developed now, they can give people immunity from future outbreaks.

One of the most advanced efforts is happening in China with a recombinant adenovirus vector-based vaccine based on the SARS-CoV-2 S gene. When tested in monkeys, this vaccine candidate produced antibodies, which help fight the virus. A phase I clinical trial will soon begin in Wuhan with 108 healthy volunteers between 18 and 60 years old, in which three different doses will be tested.

The goal of a phase I trial is to check the safety of the vaccine at different doses, evaluating any side effects. If a drug is proven to be safe, it may then be moved into a phase II trial, in which the drug is administered to people to see if it works.

Other proposals are being promoted by CEPI, an international association in which public, private, civil and philanthropic organizations collaborate to develop vaccines against future epidemics. It is currently funding eight coronavirus vaccine projects that include recombinant, protein, and nucleic acid vaccines (all are in the preclinical phase unless otherwise noted):

Recombinant influenza virus vaccine (University of Hong Kong) - Adds a SARS-CoV-2 gene to a non-virulent strain of the flu, which could be administered intranasally and work dually as a flu vaccine.

Recombinant vaccine using the Oxford chimpanzee adenovirus, ChAdOx1 (Jenner Institute, University of Oxford) - Models of this vaccine type have been tested against MERS, influenza, chikungunya and other pathogens such as malaria and tuberculosis, and can be manufactured in large scale in bird embryo cell lines. 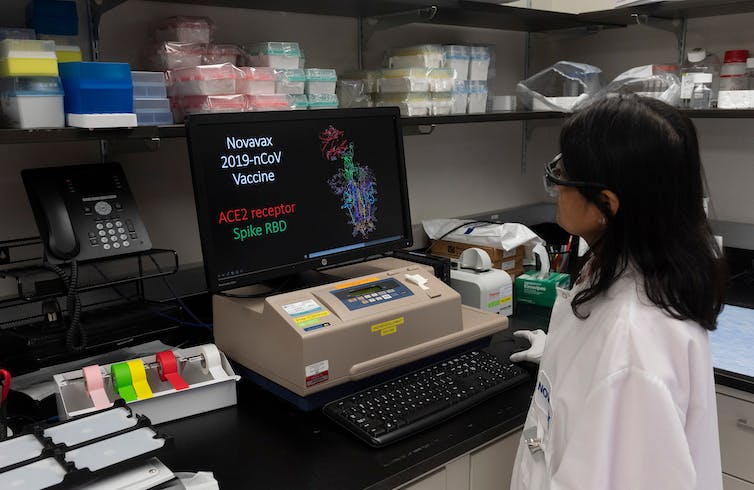 Recombinant protein vaccine (University of Queensland) - This vaccine relies on the creation of chimeric molecules capable of maintaining the original three-dimensional structure of the viral antigen. They use the technique called “molecular clamp,” which allows vaccines to be produced using the virus genome in record time. It is in the preclinical phase.

Vaccine mRNA-1273 (Moderna) made up of a small fragment of messenger RNA with the instructions to synthesize part of the SARS-Co-V protein S. The idea is that once introduced into our cells, they would make this protein, which would then act as an antigen and stimulate the production of antibodies. It is already in the clinical phase and it has begun to be tested in healthy volunteers.

Messenger RNA vaccine (CureVac) - This is similar to the Moderna proposal, with recombinant messenger RNA molecules that are easily recognized by the cellular machinery and produce large amounts of antigen. They are packaged in lipid nanoparticles or other vectors.

DNA INO-4800 vaccine (Inovio Pharmaceuticals) - Inovio manufactures synthetic vaccines using DNA of the S gene that is present in the surface of the coronavirus. Clinical tests of a similar prototype vaccine against MERS, called the INO-4700 vaccine, found that the drug was well tolerated and produced a good immune response (high antibody levels and good T-cell response, maintained for at least 60 weeks after vaccination).

Finally, two Spanish researchers, Luis Enjuanes and Isabel Sola, have just received express funding from the Spanish government to develop a live attenuated coronavirus vaccine that would create an altered copy of the virus that is incapable of producing the disease but that serves to activate our defenses.

There is still no approved antiviral or specific SARS-CoV-2 vaccine. All of these antiviral and vaccine proposals are in the experimental phase. Some will not work, but the chances of finding one that will are high.

The WHO’s new international consortium, called Solidarity, seeks effective treatment for COVID-19. At the moment, Argentina, Bahrain, Canada, France, Iran, Norway, South Africa, Spain, Switzerland and Thailand are participating, and it is expected that ever more nations will join in this great global clinical trial project.

[You’re smart and curious about the world. So are The Conversation’s authors and editors. You can get our highlights each weekend.]