While a small portion of the jump can be attributed to 9 cases being confirmed in the Gaza Strip, the main cause of the increase is the ordered return of thousands of Palestinian laborers from Israel back to the West Bank. 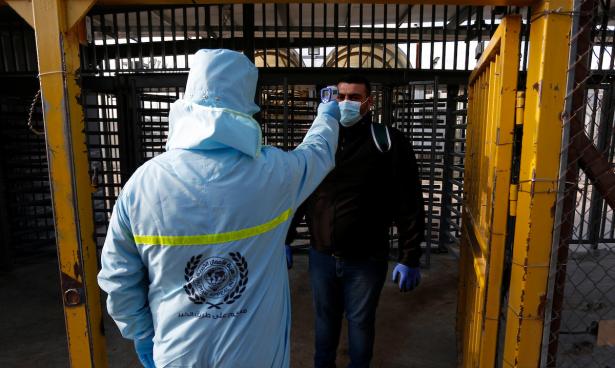 A man wearing a protective facemask uses a thermometer to detect a fever associated with the coronavirus, in the West Bank city of Jenin, on March 19, 2020., Shadi Jarar'ah/APA Images

After three weeks of a relatively slow growth rate of coronavirus cases in Palestine, things took a turn for the worse this week, as the number jumped from 62 to 91 in just two days.

While 91 is a shockingly low number compared to Israel, which has over 2,000 cases, and other countries, it marked a sharp increase from the steady 50-60 cases which Palestinians had seen in the past three weeks.

While a small portion of the jump can be attributed to 9 cases being confirmed in the Gaza Strip, the main cause of the increase is the ordered return of thousands of Palestinian laborers from Israel back to the West Bank.

Two days ago, on March 25th, Palestinian Prime Minister Mohammed Shtayyeh ordered thousands of Palestinian labourers who were working in Israel to return home ahead of further movement restrictions imposed by Israel, and in light of the severe mistreatment of workers by Israeli authorities and employers.

Since then, 20 new cases of the coronavirus have been confirmed in the West Bank. At least 15 of the new cases, and one death, were traced back to Palestinian labourers who had recently returned from Israel and Israeli settlements.

It is estimated that around 40,000 laborers traveled into Israel for work over the past few weeks. While a large number of the laborers are still in Israel, thousands are expected to flood back into the West Bank, raising concerns over how well the PA will be able to deal with the influx of potential virus carriers.

Shtayyeh’s decision to call workers back to the West Bank came just one week after the PA, in coordination with the Israeli Ministry of Defense, allowed for Palestinian labourers to travel into Israel so as not to lose their jobs and much needed wages during the coronavirus pandemic.

As part of the agreement, the workers would be made to sleep in Israel for at least one or two months. It was a first for Israel, which typically forbids Palestinian labourers from sleeping inside the country due to “security concerns.”

The amendment allowing for a long-term stay in Israel was intended to prevent the transmission of the virus between Israel and the West Bank.

But just as soon as the workers, who traveled from all across the West Bank, had arrived in Israel, Israel began dumping sick workers at checkpoints along the Green Line.

Palestinians were outraged after a video surfaced of a sickly labourer with a high fever, shortness of breath, and body aches lying on the ground after he was dumped by Israeli forces at the Beit Sira checkpoint West of Ramallah.

In the wake of the video, several other reports were made of laborers being dropped at checkpoints by Israeli forces. They were reportedly kicked out of their work and denied medical care in Israel after exhibiting symptoms of the coronavirus.

“In light of the dangerous, successive developments in Israel and expected measures banning movement, we call on all Palestinian laborers to return to their homes,” Shtayyeh said.

Photos and videos showing workers living in squalor conditions were also circulated on social media, as it was revealed that some Israeli employers had not provided proper accommodations for their workers as promised, forcing many to sleep at the construction sites where they worked.

PA spokesman Ibrahim Milhem condemned Israeli employers for forcing laborers to live in conditions “not appropriate for humans,” and blasted Israeli authorities for the “racist and inhumane” treatment of sick laborers.

The call to bring workers back to the West Bank has sparked a debate within Palestinian society, with many blaming the PA for allowing the workers to go into Israel in the first place, and subsequently endangering the rest of the population by calling them home.

Despite the PA’s efforts to contain the spread of the virus, the health risks posed by the laborers are already proving to be an uphill battle for the government.

In the village of Biddu, at least 15 people were infected with the virus, and one of them died as a result. The cases were reportedly traced back to at least one laborer who was working in Israel.

According to official PA news agency Wafa, outside of Biddu, 227 laborers were tested for the virus. Two of the laborers, both residents of the Bethlehem district, tested positive for the virus.

The two cases were identified as a man who worked at a gas station in the Gush Etzion settlement, and his mother who worked as a housekeeper in another settlement.

Local media reported that man and his mother had come into contact with several people and traveled to the major vegetable market in Bethlehem before being tested for the virus.

Despite the government’s efforts –which include ordering all returning workers into a 14-day isolation period, and urging anyone with symptoms to report for testing — it is practically impossible for the government to keep track of the movement of all the workers.

A video was published on social media showing laborers from the Hebron area who had just returned from Israel, stranded near a checkpoint and begging to be tested for the virus before they traveled back home.

“We’ve been waiting since 9am for the ministry of health,” one of the workers, who said he just came back from Jerusalem, tells the camera. “We’re waiting for a doctor, for anyone to just come test us. There’s no one here.”

“I want someone to test me, to see if I have the virus or not, so I know if I should go back home or not,” the visibly frustrated man says. “We came back upon the order of the prime minister. Now what?”

Additionally, Palestinian officials have warned that they are battling the coronavirus with “very scarce resources,” and that they are rapidly running out of testing kits.

“We have to deal accurately with the risk of infection among [Palestinian] workers returning from the 1948 lands,” Shtayyeh said during a meeting on Thursday.

“According to our estimates, the coming days will be more difficult than before, not only for us but for the entire world.

Yumna Patel is the Palestine correspondent for Mondoweiss.