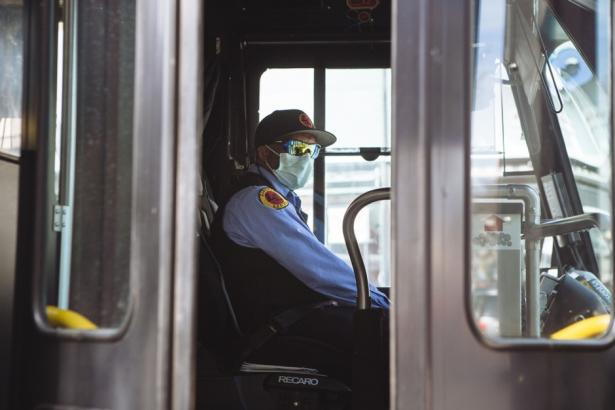 The life of a transit worker was never easy in the United States. Then along came coronavirus. To enable the livelihoods of other essential workers, thousands of bus drivers, track repairers, yard masters, cleaners and others are still showing up to their jobs amid the pandemic.

But the death toll among the ranks of front-line public transportation workers, who are considered part of the “essential workforce” in most U.S. cities, suggests they are acutely vulnerable to the virus. In New York City, 50 MTA workers have died as of April 13, more than triple the combined mortality rates of the New York City police and fire departments so far. A memorial page by the Amalgamated Transit Union shows that at least of 16 working members have died in other cities, including Boston, Detroit, New Orleans, Washington, D.C., and St. Louis. The Transport Workers Union has stated that at least seven of its members have died and that hundreds more have tested positive for the virus.

As transit workers sicken, union leaders now warn that drastic actions may be necessary, including work stoppages. While local chapters would need to decide individually if and where specific tactics are needed, “federal law recognizes that workers on the transit side should not be retaliated against for refusing to work when there is a hazardous safety condition,” said Larry Willis, the president of the Transportation Trades Department, a labor organization that represents 32 transportation-related unions, including the Amalgamated Transit Union and Transport Workers Union. “And currently, there is.”

Even under normal conditions, city bus drivers have one of the highest rates of injuries and illnesses of all occupations, between vehicle crashes, belligerent passengers, and the grind of physical labor. Now coronavirus tops that litany of risks. Among U.S. workers, bus drivers rank in the 78th percentile for being in close physical proximity to others, which means they are highly exposed to infectious disease, a New York Times analysis found.

A tragic illustration of the problem came in a recent headline about a Detroit bus driver who died from coronavirus just days after complaining about a passenger coughing on him. “Obviously, we’re being overexposed here,” John Costa, the president of ATU International, said in a video posted to Facebook on Friday.

Many workers also say that they do not feel adequately protected by their employers. Kenshun Keaton, a switch operator at the Chicago Transit Authority, where one shop machinist has died of coronavirus and several workers have tested positive for the disease, said last Tuesday that he and his colleagues had not received personal protective equipment beyond globes and hand sanitizer at that time, and that they were bringing in their own cleaning materials to disinfect trains and work areas.

“A lot of us are using masks we got from family and friends in the health care industry,” he said. “We’re not receiving the PPE we need, and we’re dealing with a lot of anxiety.”

A public information officer from CTA responded that the agency had established a policy on Wednesday to issue masks to all on-duty personnel and that it was in “lockstep” with recommendations specific to the transit workforce from the Centers for Disease Control and Prevention.

“We are here on the front lines, providing necessary service to the city. However, we are not going to be working to die.”

Yet transit workers in cities including San Francisco, Louisville, Austin, Washington, D.C., and Buffalo are voicing similar fears. In New York City, MTA employees have said that the agency’s slow response to the pandemic was partly to blame for the high number of deaths in the past month. The agency started to distribute surgical and N95 masks to employees in early April. But those who are already sick say that the damage was already done.

“There’s going to be more people to die, unfortunately, because they took so long to get us the protection that we needed,” train conductor Tramell Thompson told NBC News from his home last week, where he was quarantined with flu-like symptoms.

An MTA spokesperson said that the agency has acted quickly and aggressively to protect workers, pointing to a letter by MTA chairman and CEO Patrick Foye to the New York Times in response to an article that asserted the agency had moved sluggishly. “The only ‘sluggish’ response has been on the part of the World Health Organization and Centers for Disease Control and Prevention, whose guidelines against widespread use of masks the MTA (a transportation organization, not a medical provider) initially followed but has since disregarded,” Foye wrote.

Many other job environments are also proving to be hot spots for coronavirus, from meat-packing plants to airliners. But transit labor leaders say that the age of its workforce creates an additional vulnerability, given the demographic groups at highest risk for the virus. An analysis of American Community Survey data by TransitCenter, a think tank, found that 13% of front-line transit workers are over the age of 65, compared to 7% of the general working population. The large proportion of black Americans who drive buses, fix tracks and operate signals underscores the emerging racial disparity in the pandemic’s death toll.

Other occupational hazards may contribute to pre-existing health conditions that make some workers more susceptible to the respiratory disease. “Our members have spent years exposed to diesel fumes and infectious agents and are subject to unsafe air quality caused by inadequate air filters and ventilation systems,” Jim Evers, the president of the Boston Carmen’s Union, said in a letter to Massachusetts lawmakers last week. “As a result, many employees already suffer from health ailments and respiratory problems putting them in high-risk categories — but they show up each day because they take their responsibilities seriously.”

With tens of millions of Americans under stay-at-home orders or out of work, ridership on the nation’s top mass transit systems has fallen 70 percent. Combined with a loss in passenger revenue, a dwindling transit workforce has forced massive service cuts in several cities, including New York, Seattle, and San Francisco. In San Francisco, where bus operators are now receiving masks, wipes, and hand sanitizer, so many workers were calling out sick or using sick days to avoid infection that the agency was forced to cut roughly 75% of its bus lines on April 6.

But the collapse in ridership hasn’t always prevented dangerous overcrowding in New York and San Francisco: Because of service cuts, fewer vehicles and longer headways have led to outrage over packed conditions on some trains and buses.

Many transit agencies have taken steps to limit risk for workers. Virtually all have ramped up station and vehicle cleaning. Dozens have gone fare-free and are boarding passengers on the rear of buses so as to avoid contact with operators. Boston and Houston has set up cordons and signage to help riders practice social-distancing inside vehicles. Some areas, including Toledo and New Jersey, are requiring masks on all passengers who wish to board, a practice featured on a list of employer demands that ATU is currently petitioning members to sign. But the policy can backfire: Philadelphia’s transit system reversed its short-lived mask requirement on Friday, after footage of a mask-free man being dragged off a bus went viral.

Labor groups are calling for stronger protections. In Boston, where at least 53 employees of the Massachusetts Bay Transportation Authority have tested positive for the coronavirus and one has died, the local union is appealing to state lawmakers to include transit workers in legislation designed to ensure emergency leave for workers who catch Covid-19. In Seattle, which has seen at least three confirmed cases among transit workers, labor leaders sent an open letter to King County officials calling for hazard pay, additional PPE, and extra training for bus cleaners and operators who are frequently exposed to the virus.

National union bosses are also appealing to the federal government for assistance. A letter sent to the Federal Transit Administration by 13 labor leaders asked for national guidelines on the minimum standard of protective equipment transit workers should be able to expect. “Asking each agency to do that on their own is not getting the job done,” Willis said. “The federal government has to play a more robust role in helping secure this type of equipment.”

On April 3, ATU and TWU jointly vowed to take “aggressive action” if transit systems did not move to protect workers, listing a number of sanitary measures and health care protections as demands.

But some workers say that the safest action is to shut down systems completely. Labor strikes in transit systems in Birmingham and Detroit won bus operators a number of demanded protections. Organizers in other cities say that pausing transit service could flatten the curve of infections in their ranks, and that if agencies don’t take that step, workers could take matters into their own hands.

“We need maximum enforcement of passenger limits on the bus, and if we don’t get that soon, we need to start thinking about other measures, not just for health and safety of operators but for the general public too,” said Roger Marenco, the president of the local TWU chapter in San Francisco. “That could mean compelling our local politicians to shut the system down.”

Closing major transit networks would throw the commutes of other essential workers into disarray: An analysis by TransitCenter found that 2.8 million commuters with jobs in pandemic-critical categories — including nurses, orderlies, grocers and pharmacy clerks — rely on public transit under normal conditions. Short of a total shutdown, transit agencies could create a badge system to ensure that only essential workers are permitted to ride, Marenco suggested. Either way, workers do not wish to sacrifice the health of themselves or their families: “We are here on the front lines, providing necessary service to the city,” he said. “However, we are not going to be working to die.”

Kelly Green, a bus operator at Edmonton Transit Service in Alberta, Canada, has posted calls for a transit strike on Facebook. He said that while he didn’t have all the answers about how to get other people to work during the pandemic, Green believes a labor stoppage could give transit officials time to figure out safer conditions for everyone. “I don’t have all the answers about how to do this, but what I am confident about is that shutdowns save lives,” he said.

On Monday, an online petition in support of “democratically decided mass actions of our unions and workers organizations,” separate from ATU’s appeal to members, had attracted more than 1,200 signatures. A Facebook post by Transit Workers Unite, a group organizing the petition, called for support and expressed frustration with a lack of sufficient action by agencies and union leaders.

“It is clear to front-line workers that those in power are making this crisis worse,” the post states. “By unnecessarily packing the buses and trains, failing to provide enough personal protective equipment (PPE) to workers, and failing to frequently clean the vehicles, public transit has become a lethal pipeline for viruses.”

Laura Bliss is CityLab’s West Coast bureau chief. She also writes MapLab, a biweekly newsletter about maps. Her work has appeared inThe New York Times, The Atlantic, Sierra, GOOD, Los Angeles, and elsewhere, including in the book The Future of Transportation.