The unity task forces could have a big hand in shaping Democratic policy in 2020. Here’s who’s on them. 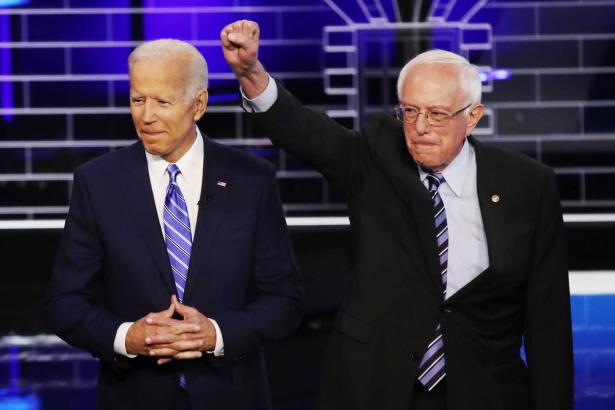 Former Vice President Joe Biden and progressive Sen. Bernie Sanders are teaming up to create joint “unity” task forces that will have a direct hand in shaping Democratic policy and the party’s agenda in 2020 and beyond.

Sanders’s allies seem encouraged about the names on the task force, which include vocal proponents for progressive policies like Medicare-for-All and a Green New Deal, like Reps. Alexandria Ocasio-Cortez (NY) and Pramila Jayapal (WA). Sanders’s former campaign manager Faiz Shakir, who has been leading negotiations with the Biden campaign, told Vox that Biden’s team has been very “amenable and open” to working with progressives throughout the process.

“[Biden] has some room to run in terms of building a more fleshed-out policy agenda to campaign upon,” Shakir told Vox. “Because he hasn’t fleshed it out as deeply as some other candidates over the course of the primary, that’s an opportunity.”

Shakir sees an opportunity for progressives to not only make their mark on Biden’s policy agenda over the coming months, but also develop lasting relationships with the Biden campaign that could lead to having input over who joins Biden’s administration if he wins in November.

“The way in which we know it succeeded is if the policy is married with personnel who can execute that policy,” Shakir said.

Though the ability to pass any bold policy depends largely on the political make-up of Congress after the 2020 election, this is a big first step, and a sign that the progressive and moderate wings of the Democratic Party seem intent on working together.

“From health care to reforming our justice system to rebuilding a more inclusive and fair economy, the work of the task forces will be essential to identifying ways to build on our progress and not simply turn the clock back to a time before Donald Trump, but transform our country,” Biden, the presumptive Democratic presidential nominee, said in a statement.

The task forces will meet ahead of the Democratic National Convention in August and will present policy recommendations to both Biden and the DNC’s Platform Committee.

As the nation struggles with the coronavirus pandemic, longstanding inequalities around jobs and health care have created only more urgency for meaningful change. Sanders talked about the need for Democrats to create a policy agenda with working-class people in mind.

“I commend Joe Biden for working together with my campaign to assemble a group of leading thinkers and activists who can and will unify our party in a transformational and progressive direction,” Sanders said in a statement.

Biden and Sanders are building a coalition

This task force was a large part of the reason Sanders formally endorsed Biden soon after he exited the 2020 Democratic primary. Sanders wanted to a guarantee his progressive vision would have a tangible impact on policy in a Biden administration.

The people Sanders selected to serve on the task forces will not only have input when it comes to policy but may also have a say on who might serve in Biden’s White House if he is elected president.

Sanders’s team could exert its influence in other ways as well. Sanders is still on the ballot in many states, which could allow him to pick up delegates that can be used as bargaining chips when it comes to updating the party platform at the DNC, as he did in 2016. But actually having a seat at the table well before the DNC happens is a huge win for progressives.

The task forces also speak to Biden’s style as a politician. As Vox’s Ezra Klein points out, Biden is known for his skill at making deals and building coalitions. It helped him during the primary season, when he built coalitions with moderate competitors like Pete Buttigieg and Sen. Amy Klobuchar. Now it could help him win over a progressive movement he needs on his side in order to beat Trump in November.

Klein wrote this about Biden in April:

He’s eager to cut deals, form coalitions, and make compromises to win support. For the most part, those deals dogged Biden during the primary, and his senatorial instincts were seen as a weakness. His long record and conciliatory temperament gave opponents reams of ammunition with which to attack him.

No one would say Biden became the presumptive Democratic nominee because of his glittering speeches or razor-sharp debate performances. At crucial moments in the primary, he outmaneuvered his competitors through transactional, coalitional politics. He won them over rather than ran them over.

Sanders spoke to that when he endorsed Biden last month.

“I know you are the kind of guy who is going to be inclusive,” Sanders said during a video discussion with Biden. “You want to bring people in, even people who disagree with you. You want to hear what they have to say. We can argue it out. It’s called democracy. You believe in democracy. So do I ... And in that regard, Joe, I very much look forward to working with you.”

Shakir told Vox that spirit has continued as the two campaigns set out to build the task forces.

“They’ve been extremely amenable and accepting and not striking anybody for ideological reasons at all,” Shakir said. “My own sense of it is they’re really eager and hopeful this does work out quite well and people build this camaraderie.”

Here’s who’s on each task force

Ella Nilsen covers Congress and the Democrats for Vox. Before coming to Vox, she worked at the Concord Monitor newspaper in New Hampshire, where she covered Bernie Sanders and Donald Trump in the 2016 primary.

Every day Vox aims to answer your most important questions and provide you, and our audience around the world, with information that has the power to save lives. Our mission has never been more vital than it is in this moment: to empower you through understanding. Vox’s work is reaching more people than ever, but our distinctive brand of explanatory journalism takes resources — particularly during a pandemic and an economic downturn. Your financial contribution will not constitute a donation, but it will enable our staff to continue to offer free articles, videos, and podcasts at the quality and volume that this moment requires. Please consider making a contribution to Vox today.