George Floyd's Death Is a Failure of Generations of Leadership

Policymakers in the 1960s had the answers - give political and economic power to the people - but walked away. Instead, policymakers blamed black people for the instability, ignoring the buildup of centuries of racial oppression. 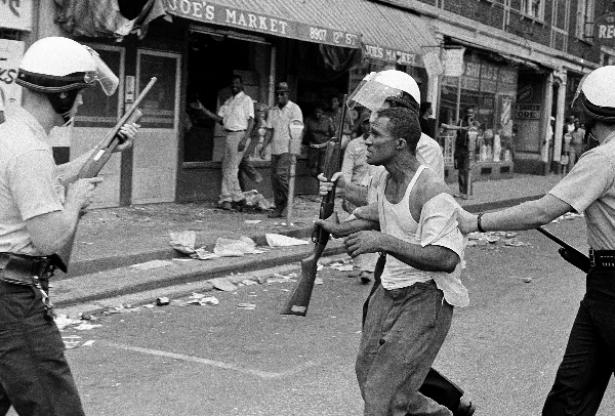 Police taking a man into custody in Detroit in 1967.,Credit: Associated Press // The New York Times

The circumstances that led to the police killings of George Floyd — and thousands of other citizens over the years — could have been avoided if our elected officials in the 1960s had responded to protesters’ demands for socioeconomic inclusion. Instead, policymakers blamed black people for the instability, ignoring the buildup of centuries of racial oppression. They pursued a misguided policy path that has failed to keep communities of color safe for more than 50 years.

The police have long operated as guardians in white and middle-class communities, protecting property from outsiders. But in segregated urban neighborhoods, officials have deployed militarized police forces and expanded the prison system instead of working to address the root causes of the uprisings: mass unemployment, failing public schools, dilapidated housing and the deterioration of basic public goods like clean water.

We can’t let history repeat itself. While flames engulf at least 140 cities across the country, we must create a more egalitarian society out of the ashes by transforming policing. The blueprint was laid out in the 1960s — empowering low-income citizens to change their communities in their own vision, and investing in those alternatives at scale. Today we need the courage to act.

President Lyndon B. Johnson recognized the role police brutality and socioeconomic inequality played in urban uprisings when he convened the Kerner Commission in 1967. Its report warned that if American political and economic institutions failed to commit resources “sufficient to make a dramatic, visible impact on life in the urban ghetto,” the nation would become increasingly divided along racial lines and plagued by inequality — a “spiral” of segregation, violence and police force. Unfortunately, Johnson and other liberal policymakers distanced themselves from the Kerner report, out of discomfort that the document implicated white racism in fomenting domestic turmoil.

Johnson’s racism may have compromised the promise of the Great Society, but his domestic policies leave us with an important policy precedent, a blueprint for getting out of our current crisis. To begin to dismantle the socioeconomic conditions that led to Mr. Floyd’s premature death, we can look to the principles of community representation and grass-roots empowerment that steered the early development of Johnson’s domestic program.

The inaugural legislation of the war on poverty, the Economic Opportunity Act of 1964, enshrined a commitment to community involvement in the idea of “maximum feasible participation.” Inspired by Saul Alinsky’s method for organizing, this principle empowered ordinary citizens to develop their own solutions to cure and prevent the system of racial inequality, with support from the federal government.

Officials from the Office of Economic Opportunity interpreted “maximum feasible participation” to mean the law should help “the poor in developing autonomous and self-managed organizations which are competent to exert political influence on behalf of their own self-interest.” Essentially, the Johnson administration and Congress charged the O.E.O. with systematically including poor people in the administration of urban social welfare programs. It was the first and only time in the history of the United States that grass-roots organizations received direct federal funding to transform unequal conditions on their own terms.

During the very brief moment when “maximum feasible participation” was given a chance to steer the direction of the war on poverty, activists, organizers and residents of segregated low-income communities throughout the country seized on the idea to realize radical, even revolutionary approaches to restructuring American society, exercising claims to self-determination and autonomy that mainstream civil rights leaders championed in the mid-1960s.

In Manhattan’s Lower East Side, the O.E.O. supported residents in protesting the New York City’s police department, department of welfare and public school administrators with the Mobilization for Youth Program. In Chicago, federal authorities granted the community-based Woodlawn Organization $1 million to work with young people who had been arrested. And the Community Development Corporation of Syracuse used federal funding to support neighborhood organizations in rent strikes and demonstrations at city hall, so parents could have enough disposable income to feed their families and keep a roof over their heads. Continued direct action eventually led to the establishment of public recreational centers in the city, providing young people with space to play.

The tragedy of the war on poverty is that the promise of grass-roots empowerment and representation was not sustained on a wider level, or for entire communities, but only for individuals. While remnants of critical reforms are still with us, like the Head Start program, on the whole policymakers at all levels believed “maximum feasible participation” worked against their self-interest. By 1965, as many promising grass-roots initiatives began to receive the initial O.E.O. grants, they were required to design programs with public officials and municipal authorities in top-level positions. Soon after, policymakers defunded and dissolved anti-poverty programs.

Following Johnson’s escalation of the “war on crime” during the second half of the 1960s and amid the “long hot summers” that marred his presidency, the national government began to invest in police forces and entrust officers to assume a more prominent role in urban life and the administration of social services in low-income neighborhoods. The United States would look entirely different today had policymakers embraced “maximum feasible participation” with the same level of resources and the same length of commitment as they devoted to the wars on crime and drugs.

As well as divesting from grass-roots initiatives while shoring up law enforcement, policymakers and officials consistently dismissed the ideas for social change that emerged among people of color themselves — resistance largely rooted in their own racism. “There has never in history been an adequate black nation,” President Richard Nixon told his chief of staff, Harry Haldeman, “and they are the only race of which this is true.”

This thinking prompted Nixon to defuse the O.E.O. and join its programs with the Justice Department, relegating community involvement in federal social programs to the crime control arena and bolstering omnipresent police patrol, surveillance and law enforcement technologies in black and brown neighborhoods. During this period, only about 2 percent of the grants the Justice Department dispersed to fight the war on crime went to community-based measures like tenant patrols and block watches.

Although public officials rarely assert their racism in such blatant terms as Nixon did, their consistent resistance to supporting autonomous community organizations reflects a longstanding unwillingness to disrupt the racial hierarchies that have defined the United States since its founding.

For instance, President Jimmy Carter emphasized the need for grass-roots participation in a program he established to revitalize public housing projects in the late 1970s. In practice, however, citizen groups like the League to Improve the Community in Chicago’s Robert Taylor homes were denied funding — even though activists called for the very same strategies as federal officials, but sought to carry them out without oversight from law enforcement and housing authorities.

The rhetoric of community involvement evaporated from the domestic policy arena when Ronald Reagan took office. As the wars on drugs and gangs unfolded in the 1980s and 90s, and federal policymakers continued to shore up policing and incarceration over social welfare provisions, the police became even more central to the provision of social services in isolated communities.

In the aftermath of the unrest that roiled Los Angeles in 1992 after an all-white jury acquitted four police officers on charges of assault and excessive force for beating Rodney King, the Clinton administration and Congress created “empowerment zones” to spur economic activity. But rather than empowering impoverished residents themselves, this grant program turned into tax breaks for businesses and is widely considered a failure.

As we create a new future of policing, we should not fall back on the unsuccessful, top-down approaches of the past. Demonstrators today are calling for the restructuring of vital resources that will be required to build a just society, summarized in their demand: “Fund Community, Not Police.” The Minneapolis group Reclaim the Block quickly set up a campaign in the wake of Mr. Floyd’s killing that envisions the abolition of police forces by defunding them altogether. The burning of the Third Police Precinct in Minneapolis, the fires set to the Multnomah County Justice Center in Portland, Ore., and the widespread smashing and destruction of police cruisers across the United States are material expressions of this sentiment.

Although the University of Minnesota ended its contract with the police and the Minneapolis Public School Board seems poised to do so, residents in over-policed and underprotected communities of color must have a more central role in fostering public safety, as well as welfare, education, public housing and other social programs that directly shape their everyday lives.

Ceding political and economic power to the people doesn’t require us to reinvent the wheel. The policy precedent of “maximum feasible participation” provides an inspiring starting point.

We can fund local victims’ rights groups and vibrant autonomous grass-roots programs at or above the same level as anti-gang task forces and community policing initiatives. We can establish powerful civilian review boards to hold troublesome officers accountable and entrust residents themselves to keep their own communities safe, rather than outside forces that often resemble occupying armies. We can commit to job creation programs for at-risk groups outside of the service economy. We can come to terms with the growing movement to abolish the police and the nation’s horrific prison system.

These are the kinds of transformative approaches that will allow us to attack the entrenched systemic problems and assaults on civil liberties that have enabled racial inequality to persist in America. The challenge must be met immediately. Or else we risk becoming even more fractured, with the fires in our streets continuing to burn.

[Elizabeth Hinton (@elizabhinton) is an incoming professor of history, law and African-American studies at Yale and the author of “From the War on Poverty to the War on Crime: The Making of Mass Incarceration in America.”]