Progressives Have Good Chance to Move a 'Receptive' Biden to the Left, Says Sanders

"It is not good enough just to elect Joe Biden. We've got to continue the movement in this country for transformative change." 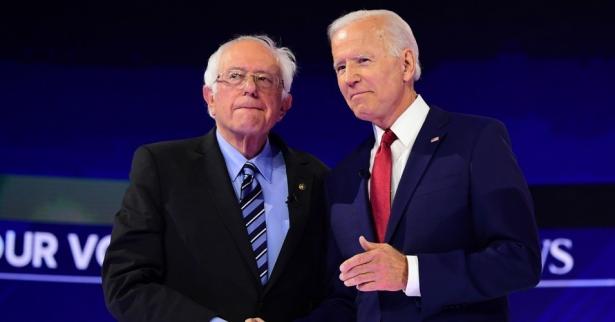 Sen. Bernie Sanders told The New Yorker Tuesday that he believes former Vice President Joe Biden can be pushed to the left on a number of issues if he wins the 2020 general election.

In an interview titled "Bernie Sanders Is Not Done Fighting," the Vermont independent senator refused to "sugarcoat" his political differences with his former primary opponent, who is now the presumptive Democratic nominee challenging President Donald Trump in November. During the 2020 primary debates, Biden claimed Sanders' plan to expand Medicare to all Americans was not "realistic" and said the country is "not looking for a revolution" weeks before the coronavirus pandemic revealed the economic precarity in which millions of people live in the United States.

However, Sanders expressed hope that the joint task forces created by his and Biden's campaigns could help push Biden to embrace policies that prioritize the needs of working and marginalized Americans.

Whether Biden does so, Sanders said, will determine whether the former vice president can effect meaningful change during his potential presidency.

"It is not good enough just to elect Joe Biden," Sanders told the magazine. "We've got to continue the movement in this country for transformative change, and to understand that we are way, way, way behind many other industrialized countries in providing for the needs of working families."

The need for Biden to push a more progressive policy agenda should now be apparent to former skeptics in the midst of the ongoing coronavirus pandemic, suggested Sanders. The public health and economic crisis caused by the outbreak has so far pushed more than 16 million Americans off their employer-sponsored health insurance, according to the Economic Policy Institute, and has caused an explosion in demand at food banks across the U.S. as many unemployed people began struggling to afford basic necessities after missing just one or two paychecks.

"What we are seeing right now, the great economic message of today, is that, when you live paycheck to paycheck and you miss a few paychecks, a few weeks of work, your family is suddenly now in economic desperation. Literally. Struggling to put food on the table and pay the rent," Sanders said. "So we've got to rethink."

"The fight continues for a Medicare for All single-payer program, and that becomes especially obvious when you have seen in recent months millions of people losing their jobs," the senator added. "So I'm going to continue that fight."

Sanders said Biden has been "much more receptive to sitting down and talking with me and other progressives than we have seen in the past," a reference to former Democratic nominee Hillary Clinton.

"I think it is fair to say that our relationship with Biden is a stronger relationship," he told The New Yorker.

According to Sanders, Biden has expressed a desire to be "as strong as possible" in confronting the climate crisis, after facing criticism during the primary for failing to call for a ban on fracking and to set an ambitious target for eliminating fossil fuels from the U.S. economy.

Rep. Alexandria Ocasio-Cortez (D-N.Y.) and Sunrise Movement co-founder Varshini Prakash, both of whom endorsed Sanders during the primary, are members of the two campaigns' joint task force on the climate crisis.

Rep. Pramila Jayapal (D-Wash.), a former Sanders surrogate who sponsored the Medicare for All Act of 2019, and labor leader Sara Nelson are members of the task forces on healthcare and the economy, respectively.

"There are six task forces at work, literally, as we speak, between his people and people who supported me, hammering out, or trying to hammer out, agreements on the economy, healthcare, immigration reform, criminal-justice reform, education, and climate change, and we'll see what the fruits of those discussions are," Sanders told The New Yorker. "But Joe has been open to having his people sit down with some of the most progressive folks in America, and that's a good sign."