Emergency! The media are under attack - physical, professional and legal 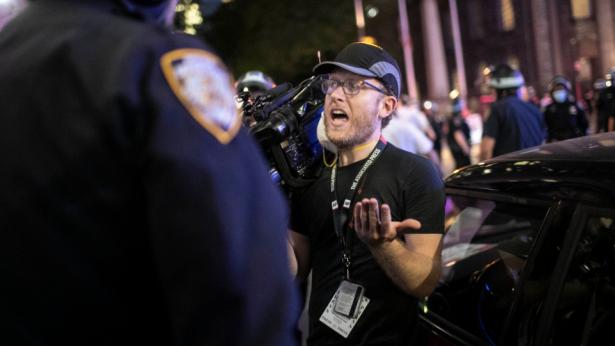 New York City police officers surrounded, shoved and yelled expletives at two Associated Press journalists covering protests in the latest aggression against members of the media during a week of unrest around the country, credit: AP Photo/Wong Maye-E

News outlets are starting to shrink or disappear altogether. And after the last two weeks, we have a new chapter to the media extinction narrative, as physical violence and threats to journalists covering protests, often at the hands of police, are starting to pile up.

Newsroom uprisings are partially about the lack of minority employees in key jobs and leadership positions — but also about how stories about race are reported and framed, and who gets to do the reporting and framing.

The government has routinely ignored the impact media consolidation has on the diversity and quality of journalism, especially in local broadcasting. The public is now awash in conspiracy theories and highly partisan takes presented as hard news.

The Voice of America's two top executives stepped down Monday following Senate confirmation of President Trump's pick to run the agency that oversees the international broadcaster.

Four photo editors talk about the inherent subjectivity of photojournalism, the racist distribution of power and opportunity in the industry, and their demands for a sustained commitment to make photography more Black, far into the future.

For journalists all over the country, the guilty verdict on Maria Ressa and Reynaldo Santos Jr carried a clear message: “To be critical is to be snuffed out.”

Many large national brands avoid Carlson's 8 p.m. talk show, even though it is among the highest-rated shows on cable television, which would normally make it an attractive place to run ads.

Amazon, Microsoft, and IBM say they want federal rules around the technology. Critics of the proposal, sponsored by four Democrats, say it doesn't go far enough.