The rights of women to terminate their pregnancies and to receive free contraceptives under the Affordable Care Act (ACA) are on the chopping block. 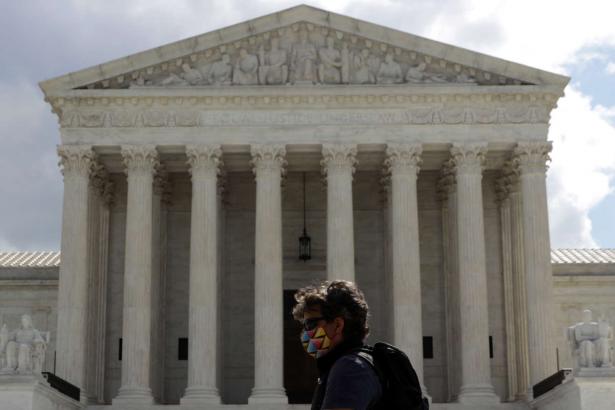 A pedestrian walks in front of the U.S. Supreme Court building on May 12, 2020, in Washington, D.C., Alex Wong/Getty Images

Those challenges to reproductive freedom are consistent with Trump’s agenda of pandering to the religious right while erasing Barack Obama’s achievements. The Supreme Court will rule on these cases during the month of June.

Burdening the Right to Abortion

Although the Court does not yet have a case that contests the constitutionality of Roe v. Wade, it has the opportunity to chip away at the right to abortion as opponents continue to erect obstacles to reproductive health care. Their strategy is to bring about death of abortion by a thousand cuts.

Four years ago, in Whole Woman’s Health v. Hellerstedt, the high court struck down a Texas law that required doctors who perform abortions to have admitting privileges at hospitals within 30 miles of the location of the abortion. The Court held that the law did not provide “medical benefits sufficient to justify the burdens upon access that each imposes” and erected “a substantial obstacle in the path of women seeking a previability abortion, constitut[ing] an undue burden on abortion access.”

In June Medical Services LLC v. Russo, the high court is now facing the same issue it resolved in Whole Woman’s Health. Louisiana has a law identical to the overruled Texas law. If upheld, the Louisiana law would leave only one doctor in one Louisiana clinic to perform abortions. The lower court found that closing all other clinics in the state would impose a heavy burden on low-income women, requiring them to travel long distances to obtain abortions.

During oral argument in June Medical Services, the four liberals saw no difference between the Texas and Louisiana laws. Justice Ruth Bader Ginsburg asked, “What sense does the 30-mile limit make?” She noted that most complications arise once a woman returns home. Justice Elena Kagan said that Hope Clinic in Shreveport, Louisiana, “has served over 3,000 women annually for 23 years, so that’s around 70,000 women and has transferred only four patients ever to a hospital.”

Roberts and Kavanaugh were not sure whether the situations in Texas and Louisiana were identical. Roberts queried whether they should take a state-by-state approach to the issue. Justice Samuel Alito’s questions appeared to signal support for the Louisiana law. Neither Justices Neil Gorsuch nor Clarence Thomas asked any questions.

The ACA, signed by Obama in 2010, provides coverage for preventive health services for women. In 2011, the Obama administration accepted the recommendation of a scientific panel and required that employers and insurers provide women with free FDA-approved contraception.

Religious organizations were exempted from the requirement. Hospitals and schools affiliated with them were not. The Obama administration, however, provided an accommodation allowing affiliated institutions to opt out so that other sources of funding could be identified in order to guarantee seamless contraceptive coverage. Once they notified the government, insurers or plan administrators they wanted to opt out, either the government or insurance companies would finance the birth control coverage.

In 2014, a closely divided Supreme Court held in Burwell v. Hobby Lobby that a corporation owned by a family who objected on religious grounds to furnishing insurance coverage for contraceptives for their female employees could also opt out.

But many religious groups complain that having to opt out means they would still play a role in securing birth control for their employees even if they don’t have to pay for it. In 2016, that issue was raised in Zubick v. Burwell, but the high court sent the case back to the lower court to see if a compromise could be reached. It could not.

The Trump administration issued new regulations in 2017, expanding the exemption and allowing private employers who were morally or religiously opposed to birth control to opt out. Employers were no longer required to provide an accommodation.

Little Sisters of the Poor is a group of Catholic nuns who run nursing homes for poor seniors. They have religious objections to furnishing insurance coverage for contraception. In Little Sisters of the Poor v. Pennsylvania, New Jersey and Pennsylvania challenged the 2017 regulations. The states argue that they would bear the costs of providing contraceptive coverage to women who lost it. They secured a nationwide injunction against the regulations.

There was no consensus among the justices at oral argument. Ginsburg and Justice Sonia Sotomayor thought the regulations violated Congress’s intent that women have seamless coverage for birth control. “The glaring feature of what the government has done in expanding this exemption is to toss to the winds entirely Congress’s instruction that women need and shall have seamless, no-cost, comprehensive coverage,” Ginsburg said. “This leaves the women to hunt for other government programs that might cover them.” She added, “For those who are not covered by Medicaid or one of the other government programs, they can get contraceptive coverage only from paying out of their own pocket, which is exactly what Congress didn’t want to happen.”

Sotomayor wondered if a requirement that insurers must pay for free COVID-19 vaccinations could be found unconstitutional because some employers had religious objections to vaccines.

Kavanaugh indicated that the exemption was reasonable. Alito favored accommodation of religious beliefs. Roberts and Kagan thought the exemption may be too broad. Gorsuch seemed to think the ACA grants expansive authority to government agencies. Roberts and Justice Stephen Breyer were frustrated that the opposing parties could not reach a compromise. Thomas queried whether the states even had the legal right to challenge the regulations.

If the Supreme Court upholds the Trump regulations, the government estimates that 70,000 to 126,000 women would lose birth control coverage from their employers.

The addition of Gorsuch and Kavanaugh to the Court will likely be reflected in how these cases are decided. In the abortion case, Kavanaugh’s substitution for Kennedy may well tip the balance against reproductive rights.

Will you help us get closer?

There’s only three days left in our June campaign and we still need to add 50 monthly donors. Becoming a monthly donor means consistent support for our bold and honest journalism, allowing us to strengthen Truthout and ensure our survival. Can we count on you to start a small monthly donation today? If you’re already a monthly donor or prefer to make a one time donation to our campaign we’d appreciate any level of support you can give.

Donate Now
Copyright © Truthout. May not be reprinted without permission. Thanks to author Marjorie Cohn for permission to reprint.