The Southern Key argues that much of what is important in politics and society today was largely shaped by the successes and failures of the labor movements of the 30s and 40s, notably the failures of southern labor organizing during this period. 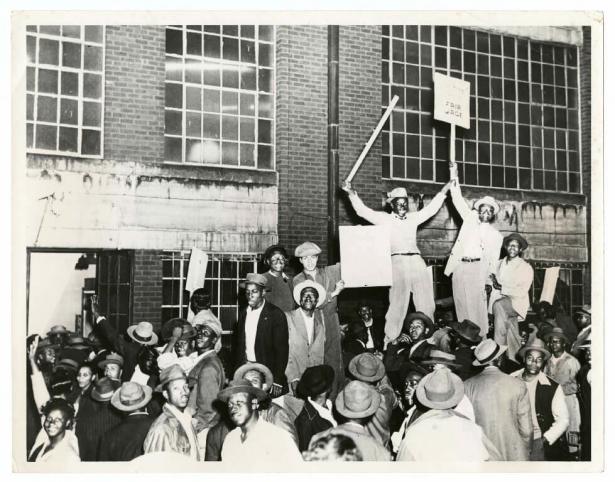 Local 22 of the Food, Tobacco and Agricultural Workers, laborers striking in Winston-Salem., Timeline.com

Even though the 1930s are often idealized as the decade in which union organizing in America was most successful, political scientist Michael Goldfield presents a much bleaker portrait of the years from the beginning of the New Deal through the end of World War II.

Goldfield contends that in those years, the labor movement and its leaders failed the workers who needed it most—the black and white industrial workers of the American South in four industries:  mining, steel, wood and textiles.  By failing to develop a strategy that would unite black workers and white workers in unions together against the low wages and exploitative working conditions that still characterize the South, he contends that trade union leaders helped set the stage for the racially and politically divided American society that exists today.

Goldfield begins with a long and brilliant introduction which describes his methodology, which he calls a materialist, structural analysis.  In plainer language, that means, start with the economy, observe the capital requirements of industry, the technology required, the skill levels of workers and the mobility of operations.  And above all, follow the money.  Pay attention to how the state protects wealth and the wealthy, and understand that everything, from the laws, to the press, to the unions and their leaders, is constrained by the conditions which support the flourishing of capitalism.  This last point is particularly important to the thesis of this book.  Under what conditions are trade unions legal?  How does their legality constrain their activities?  In what ways are unions required to uphold the needs of the companies against the demands of their members?  Goldfield examines how “the winning of trade union legality is a highly positive yet contradictory victory for workers” (p. 23), especially in relation to the choices facing the leaders of labor.

He unfolds his story in two parts.  The first is to examine the structure of industry in mining, steel, textiles and wood, primarily in southern states, and then he describes the ways in which labor organizing took place, whether from mass action by workers, secret organizing by Communists, negotiations between labor leaders and employers, or by any combination of these.  This alone is an enormous undertaking.  The historical literature on southern industry and labor is vast. Even though he advocates a global, structural approach to studying an industry, he nevertheless must rely on hundreds of individualized studies of particular industries for his evidence.

Goldfield has done a creditable job of assembling representative sources from the past 60 years.  His project would probably have been better served by a small army of scholars, but it makes for interesting reading.  One wishes he had included agriculture as well.  It may have been the largest sector of the southern economy during this period and the source of much of the raw material for industry.  The mechanization of agriculture supported by New Deal programs insured a steady supply of low wage labor as sharecroppers and tenant farmers, black and white, were pushed off their land and into either unemployment or the industrial workforce.

The second part of the story is about the character of labor leaders and their relationship to capitalism, government, and radical politics.  While he acknowledges that these categories are not rigid, Goldfield’s discussion of these industries includes his analysis of five types of labor leaders during this period.  He builds his analysis of the failures of Southern organizing around their priorities.

In the textile industry, Goldfield sees Sidney Hillman of the Amalgamated Clothing Workers of America (ACWA) as the type of leader who wanted to cooperate with capitalists and rely on support from the government rather than mass action by workers, yet who was not anti-Communist.

In the steel industry, Phillip Murray of the Steel Workers Organizing Committee (SWOC), later the Congress of Industrial Organizations (CIO), represents for Goldfield a narrow, conservative leader in the tradition of business unionism, preoccupied only with wages, hours and working conditions in a single industry.  Murray represents a type of union leader who was extremely anti-Communist.  He laments that this type of leader became dominant in American labor unions after World War II.

In mining, Goldfield calls miners the Vanguard of Labor, but he has great disdain for their union’s president, John L. Lewis of the United Mine Workers of America (UMWA). Lewis skillfully used anti-Communism as a tool to strengthen his union and was a charismatic leader who relied on mass actions by his members and sometimes activities of Communists to leverage power for his union.

Goldfield discusses the work of labor leaders who were members of the Communist Party (CPUSA) in a variety of industries, but notes they were inconsistent in their actions because of directives from their organization.  Goldfield’s discussion of the Communist Party and its activities is probably one of the most useful and important aspects of this book, especially because, in the South, anti-union sentiment waved the banner of anti-communism.  In Goldfield’s telling, Communist Party members were sometimes the most forceful fighters for the rights of African Americans and for the working class as a whole, but at other times they stepped away from those values and helped destroy the radical wing of the labor movement. He gives much less attention to the Socialist Workers Party and other groups on the left who were active in local labor struggles.

Goldfield presents a tragic tale of the many and various ways these labor leaders sold out the workers of Southern industry by capitulating to white supremacy, anti-communism, and narrow economic issues within their own organizations.  He concludes with what he calls a “counterfactual argument,” asserting that if the leaders of these unions had behaved differently, they would have built strong, interracial unions in the South and laid the foundation for a what he sees as a “broader, more effective labor/civil rights movement during the 1950s and 1960s, one that might have won the support of large numbers of white as well as Black workers, thus creating the possibility for transforming not merely the South but the United States as a whole.” (p. 382)  That is why he calls this book “The Southern Key”.

That is a lovely thought.  However, as much of the evidence in his extensive bibliography notes, the South in these decades was not only segregated by race, it was ruled by white supremacist legal and extralegal terrorism that was more than hostile to the idea of unions or any other way in which people of different races would act in concert to protect their economic rights.  So, the struggle was more than a trade union one. It was and continues to be a political struggle in the South against the unity of labor by powerful economic interests from outside the region.

[Reviewed by labor historian and adult educator Janet Wells Greene, co-founder and Board Member Emerita of The Freedom School in Licking County, Ohio. Before she retired in 2009, she was a member of the faculty of the Harry Van Arsdale Center for Labor Studies at Empire State College, Historian and Director of the Library of The General Society of Mechanics and Tradesmen of the City of New York and Director of the Harry Van Arsdale Labor Documentation Project of the Wagner Labor Archives/Tamiment Library at New York University. She was a founding faculty member of The Southern Appalachian Labor School in West Virginia and was Co-Director of Development of the Highlander Center for Research and Education in Tennessee.]