The Story Behind the Lee Statue in Richmond, Virginia

Since the May 25 murder of George Floyd, the Robert E. Lee monument in Richmond, Virginia, erected in 1890, has been a focus of protests, graffiti, and public pressure calling for the removal of this offensive symbol of Confederate aspiration. 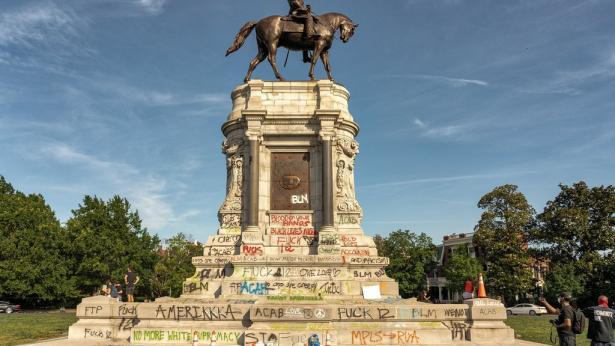 At twenty feet high, atop a forty-foot base, the bronze Confederate general sits on his horse as if surveying an active battlefield, looming over the former capital of the Confederacy.

The monument’s future is murky. On June 4, Virginia Governor Ralph Northam, a Democrat, issued an order to remove the statue, but days later a judge in Richmond issued an injunction blocking its removal.

The statue was a monumental symbol created to overshadow a social movement, blunt its course, and attempt to erase its history.

It is obvious that the Lee statue symbolizes the values of the Confederate South, but few people are aware that its original purpose was to block the development of a biracial workers’ movement, a vision for a new Richmond, a new Virginia, and a new South. The statue was a monumental symbol created to overshadow a social movement, blunt its course, and attempt to erase its history.

In spring 1886, the newly created Workingmen’s Reform Party gained control of Richmond’s government. The party, created by the local chapter of a national organization called the “Noble and Holy Order of the Knights of Labor,” had run a biracial slate of candidates for city council.

Key to their agenda was the construction of a new city hall to replace the one that had been burned to the ground—along with most of the city’s central business district—by the fleeing Confederate government in April 1865. Richmond had made do with a series of temporary facilities over the ensuing twenty years, but advocates of a “New South” argued that the region’s major industrial city needed a proper city hall.

While the incumbent city government  wanted to  select the lowest bidder, the Knights of Labor urged that the new city hall be built by local workers employed directly by the city, working an eight hour day at union wages. It also urged that all jobs on the project, including the most skilled, be open to Black workers.

The campaign rested on years of advocacy for economic and racial justice. In late 1885, the Knights of Labor launched a grassroots campaign to close the Virginia State Penitentiary’s barrel shop, whose use of convict labor undercut the abilities of workers in the city’s most racially mixed skilled trade to earn a living.

Its strategy was to lead a boycott of the city’s largest flour mill, the biggest purchaser of convict-made barrels. Black and white Knights of Labor locals extended their boycott to any store which sold this company’s flour. Using language that connected their Black and white members, they likened their campaign to “God’s boycott” of the Egyptians through the ten plagues, on the one hand, and the Boston tea partiers’ attack on British tea, on the other.

But the state legislature’s Democrats and Republicans were unwilling to address the convict labor issue, and in May 1886, the Knights of Labor were ready to break with both dominant political parties. Their Workingmen’s Reform ticket, with both African American and white candidates, swept a majority of seats on the city council. And it delivered on its promises.

Ground was broken for the construction of the new city hall, built out of local granite, by local workers, employed on the eight-hour day, paid union-scale wages, with African Americans in some of the skilled jobs. It is an especially beautiful building, still standing in downtown Richmond today. The building, however, lacks a plaque that tells this story.

In October 1886, the Richmond Knights of Labor hosted the organization’s national convention, bringing almost 1,000 delegates to the city. While a lot happened at the convention, even more happened in the community as local activists, both Black and white, joined with visiting delegates to challenge the city’s hardening Jim Crow rules. White delegates from Brooklyn, New York, refused to stay at a segregated hotel and moved into African American boarding houses.

The famed Richmond Theater was the focus of a remarkable protest, where Black and white Knights of Labor members sat together in the orchestra section during a performance of “Hamlet.” Mainstream local newspapers were outraged, but Black and labor newspapers hailed the labor organization, whose national leader opened the convention saying, “We practice what we preach.”

Democrats and Republicans continued in the efforts to divide the white and Black bases of the labor movement. When the Workingmen’s Reform Party put forward William Mullen, a local Knights of Labor, as a candidate for Congress, whispered stories about Mullen’s racial loyalties were picked up and trumpeted in the newspapers of the day.

It was within this context that Virginia Governor Fitzhugh Lee announced the state’s plans to build a gigantic statue of his uncle, Robert E. Lee, consecrating Monument Avenue as an homage to “The Lost Cause” and white solidarity. The tide had turned, and two weeks before the election, Mullen withdrew and the Workingmen’s Reform Party imploded.

The movement was in tatters when the Lee sculpture arrived in May 1890. In an orchestrated performance of Lee adulation worthy of our own times, the Virginia public relations machine gathered 10,000 people to greet the statue and haul it in crates to its designated home: a tobacco field formerly worked by enslaved people, later named Monument Avenue. Three weeks later, the statue’s official unveiling was attended by an estimated 150,000 people, more than the population of Richmond at the time.

The Lee monument was installed amid an upswing of expressions of loyalty to “the Lost Cause,” an ideological tidal wave of inter-class white solidarity.  It was followed by the rewriting of the state constitution in 1902, effectively disenfranchising African American men, and a further series of commissions of Confederate statuary along the avenue through the mid-1920s. To look at them, one would think that nothing else was possible.

But now, the time has come for the story of the Workingmen’s Reform Party, the building of Richmond’s City Hall, and the solidarity-based politics of the Black and white members of the Knights of Labor, to come out into the light. The Robert E. Lee monument has overshadowed this story for too long. It’s time we hear it.

[Dr. Peter Rachleff is co-executive director of the East Side Freedom Library in St. Paul, Minnesota, emeritus professor of history at Macalester College, and author of Black Labor in Richmond, Virginia, 1865-1890.]