“Fanning the flames of racial animosity lies at the core of Trump’s election strategy, as it did in 2016.” This is why when activists say, “white supremacy is on the ballot” and “anti-Black racism is on the ballot” in 2020, they are dead right. 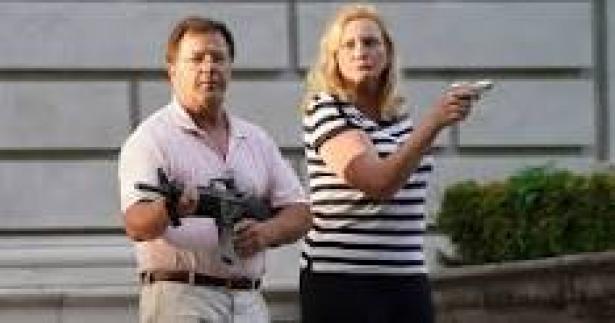 Several speakers at the Democratic Convention made good points about what’s at stake in this November’s election.

Even more on target were the grassroots organizers who, along with Bernie Sanders and Ilhan Omar, highlighted the hard-hitting UnitedAgainstTrump virtual rally during the convention organized by a coalition of social justice groups.

But it was an announcement from the GOP about who would speak at this year’s Republican National Convention that painted the most vivid picture of what this year’s balloting is actually about.

Political messaging doesn’t get any clearer than this.

With this invitation, Trump is declaring that the message he’s been sending via Twitter to white homeowners is center stage in the GOP luminary lineup:

“Get your guns out. Defend your way of life from the Black people who are coming to take your house and rape your women.”

This is straight out of Ku Klux Klan messaging and practice in the era of Jim Crow. But these was not a peep – not a peep – of objection from a single GOP elected official.

And why would there be? None raised an eyebrow two weeks earlier when Trump tweeted a racist foghorn blast instead of a mere dog-whistle touting his rollback of an Obama- era program intended to combat segregation in suburban housing: “people living their Suburban Lifestyle Dream” would “no longer be bothered or financially hurt by having low income housing built in your neighborhood. Your housing prices will go up based on the market, and crime will go down.”

From the Obama-era birther campaign that Trump used to catapult himself into the nationwide spotlight (now being reprised as birtherism 2.0 targeting Kamala Harris) to his current love affair with these two unrobed white terrorists, anti-Blackness has been Trumpism’s standard operating procedure.

A HATER ACROSS THE BOARD

Never one to set limits on bigotry, Trump builds on anti-Blackness to promote racist hate across the board.

Trump just finished heaping praise on Laura Loomer, winner of a Republican congressional primary in Florida, who is a conspiracy theorist and proud Islamophobe. Loomer is on record as declaring that “Muslims should not be allowed to seek positions of public office in this country. It should be illegal.” The perfect follow up to Trump’s Muslim ban, right?

Making sure to keep demonization of (non-white) immigrants in the mix, Trump went to the U.S.-Mexico border to reprise his longstanding anti-immigrant rant in Yuma, Arizona August 17.  As usual blathering on about immigrants being criminals, rapists and the like, Trump closed with a claim to be “proudly defending the jobs, safety and security” of Americans, eliciting cheers from the crowd.

Puerto Ricans are the despised “other” for Trump as well. Former Department of Homeland Security chief of staff Miles Taylor confirmed August 19 that Trump “wanted to see if we could swap Puerto Rico for Greenland,” because, in Trump’s words, ‘Puerto Rico was dirty and the people were poor.’”

Trump has the GOP behind him in all this, with numerous studies showing the correlation between “white grievance” and Republican support. One former Republican strategist after another has been acknowledging that “the GOP is a party whose center of gravity is white nationalism (Avik Roy) and “Trump is the logical conclusion of what the party became over the past 50 or so years, a natural product of the seeds of race-baiting, self-deception and anger that now dominate it.” (Stuart Stevens)

The latest detailed evidence of the GOP’s racist moorings and the way it is shaping the 2020 election is in Thomas Edsall’s August 19 column in the New York Times. Edsall’s piece is subtitled “2020 is the struggle between racial liberalism and racial conservatism” and bluntly states, “Fanning the flames of racial animosity lies at the core of Trump’s election strategy, as it did in 2016.”