Fire in the Anthropocene has become the physical equivalent of endless nuclear war. A new, profoundly sinister nature is rapidly emerging from our fire rubble at the expense of landscapes we once considered sacred. 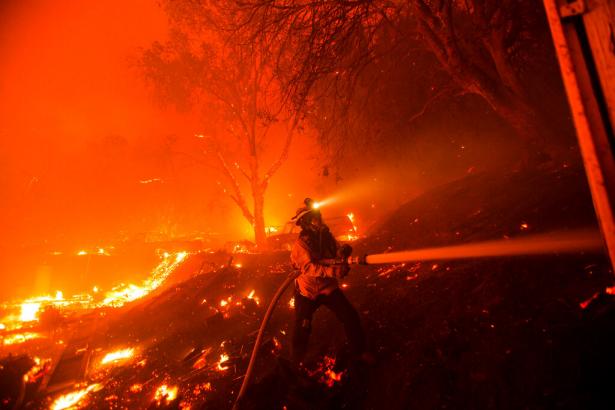 En route to Vegas and 20 minutes away from the state line, there is an exit from I-15 to a two-lane blacktop called Cima Road. It’s the unassuming portal to one of North America’s most magical forests: countless miles of old-growth Joshua trees mantling a field of small Pleistocene volcanoes known as Cima Dome. The monarchs of the forest are 45 feet high and 1,000 years old. In mid-August an estimated 1.3 million of these astonishing giant yuccas perished in the lightning-ignited Dome Fire.

This is not the first time that the Eastern Mojave Desert has burned, a megafire in 2005 scorched 1 million acres of desert, but it spared the Dome, the heart of the forest. Desert plants, unlike California oaks and chaparral, are not fire-adapted, so their recovery is an open question. The invasion of an alien bunch grass, known as Red Brome, has created a flammable understory to the Joshuas and transformed the Mojave into a fire ecology. (Invasive cheatgrass has played this role in the Great Basin for decades.) More frequent fires will accelerate vegetation change and ultimately threaten the existence of the trees.

Our burning deserts are regional expressions of a global trend. A world set on fire by climate change has unleashed a dangerous transformation of plant ecology, and thus faunal populations, from the Arctic to Patagonia, Montana to Mongolia.  California is a paradigmatic example of such a vicious circle, where extreme heat leads to extreme fires that prevent natural rejuvenation and accelerate the conversion of iconic landscapes into depauperate grasslands and treeless mountain slopes.

At the beginning of this century, water planners and fire authorities were primarily focused on the threat of multi-year droughts caused by intensified La Niña episodes and stubbornly persistent high pressure domes—both of which could be attributed to anthropogenic warming.

Their worst fears were realized in the great drought of the last decade, the biggest in perhaps 500 years, which led to the death of millions of oaks and pines, which then provided fuel for the fire-storms in 2018 and 2019.

These recent catastrophes, however, have forced scientists to recognize a new phenomenon, the  “hot drought.” Even in years with average 20th-century rainfall, extreme summer heat—our new normal—is producing massive water loss through evaporation in reservoirs and plant communities. A wet winter and early spring may mesmerize us with extravagant displays of flowering plants, but they also produce bumper crops of grasses and weeds that are then baked in our furnace summers to become fire starter when the devil winds return.

Residential development in high and extreme fire-danger areas, where a majority of new housing in the state has been constructed over the past twenty years, has also promoted the botanical counter-revolution as the thinning of forests and the clearing of chapparal opens new pathways for pyromaniacal black mustards and bromes. Weeds plus dead or drought-stressed trees is the shorthand formula for megafire.

Mediterranean vegetation (California west of the Sierras and south of Klamaths) has co-evolved with fire, and indeed oaks and most chaparral plants require episodic fire to reproduce. But routine extreme fire in Greece, Spain, Australia and California is now over-riding Holocene adaptations and producing irreversible changes in the biota. The only real constraint on future wildfire is available fuel mass. More areas will become like the Malibu Coast where fire burns in the same sector every decade or two as dictated by the 8-12 years required for coastal sage scrub to mature.

In the late 1940s the ruins of Berlin became a laboratory where natural scientists studied plant succession in the wake of three years of incessant fire bombing. The expectation was that the original vegetation of the region—oak woodlands and their shrubs—would soon reestablish itself. To their horror this was not the case. Instead escaped exotics, most of them alien to Germany, established themselves as the new dominants.

The botanists continued their studies until the last bomb sites were cleared in the 1980s. The persistence of this dead-zone vegetation and the failure of the plants of the Pomeranian woodlands to reestablish themselves prompted a debate about “Nature II.” The contention was that the extreme heat of incendiaries and the pulverization of brick structures had created a new soil type that invited colonization by plants such as the “tree of heaven” (Ailanthus) that had evolved on the moraines of Pleistocene ice sheets. An all-out nuclear war, they warned, might reproduce these conditions on a vast scale.

Fire in the Anthropocene has become the physical equivalent of endless nuclear war. In the aftermath of Victoria’s Black Saturday fires in early 2009, Australian scientists calculated that their released energy equaled the explosion of 1,500 Hiroshima-sized bombs. The current firestorms in the Pacific states are many times larger, and we should compare their destructive power to the mega-tonnage of hundreds of hydrogen bombs.

A new, profoundly sinister nature is rapidly emerging from our fire rubble at the expense of landscapes we once considered sacred. Our imaginations can barely encompass the speed or scale of the catastrophe. Gone California, gone.

Mike Davis is the author of “City of Quartz” and “Ecology of Fear.”