labor Support for Unions is this Election’s Sleeper Issue | Column

Americans are viewing unions favorably, and that could help Joe Biden. 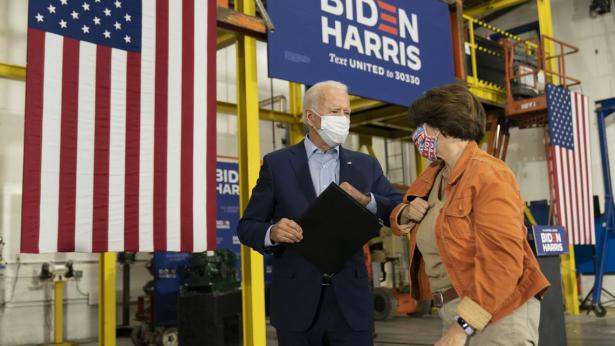 There’s a sleeper issue in this election that just woke up. It’s support for unions.

Joe Biden is a good candidate to attract labor support. He’s hardly an elitist, coming as he does from a struggling family in Pennsylvania. The tragedies he’s endured further humanize him for everyday Americans. He will fight for workers. Indeed, it’s easy to picture him speaking to union audiences.

But Biden will have his work cut out for him, because today’s unions have reached a historical low thanks in large part to Republican politicians. Let’s take a trip down memory lane to see how we reached this state.

If you were a union member working on a production line in the 1950s, it was clear how you were likely to vote. Democrats by and large supported unions, while Republicans, with some notable exceptions, didn’t. GOP presidents did sign pro-labor laws like the Railway Labor Act (1926), the Occupational Safety and Health Act (1970) and the Employee Retirement Income security Act (1974).

No president has been more aggressive and successful in weakening unions than Trump. For openers, he has declared war on the Wagner Act. Enacted in 1935, the act created the National Labor Relations Board, allowing workers to organize and engage in collective bargaining. That role has changed drastically. There are five slots but only three active members on the NLRB, all appointed by Trump. His agency has reversed the organization’s stated purpose: helping workers form unions and engage in collective bargaining.

According to “Unprecedented: The Trump NLRB’s attack on workers’ rights,” an Economic Policy Institute report authored by Celine McNicholas, Margaret Poydock and Lynn Rhinehart, the agency has enforced the top-10 wish list of the conservative, management-oriented Chambers of Commerce. Among the 10 are forced arbitration of disputes while disallowing class and collective claims, and improving “management rights” to allow unilateral changes and undermine collective bargaining.

First, he ordered “progressive discipline” for federal workers, enabling quicker dismissal and violating due process. Second, he restricted the “official time” employees can spend on union activities at the office. Third, there’s now “fast-track” negotiating, with disputes decided by the Federal Service Impact Panel, all seven members of which were appointed by Trump.

“We’ve seen federal worker contracts just ripped up and replaced with contracts written by management that had no negotiations at all,” Everett Kelley, the national president of the American Federation of Government Employees, told Washington Monthly reporter Rachel Cohen.

The percentage of union members in the work force was 10.3 percent in 2019, a sharp drop from 20.1 percent in 1983. And what of low-wage, often non-unionized workers? They qualified for overtime only at a salary up to $23,000 under Trump after $35,568 under Barack Obama, who wanted to be even more generous. He proposed a higher threshold of $47,000 that would have added some four million new workers qualifying for overtime, but he lost to a Texas judge responding to a Republican court challenge.

“That one of the nation’s two major political parties has aligned itself so strongly against unions has contributed to two troubling trends: wage stagnation and increased income inequality,” labor historian Steve Greenhouse (“Beaten Down, Worked Up”) wrote on Labor Day in the New York Times.

Then why should so many union members have voted Republican in 2016, given Trump’s history as a property owner who would stiff contractors and workers, telling them “Sue me”? (One company targeted by Trump subsequently went out of business.) His 2016 Democratic opponent Hillary Clinton carried union households by only eight percent, down from Obama’s 18.

Republican leaders have distracted working American with issues like abortion rights and same-sex marriage. But there’s more to their votes than issues. David Lebedoff, who coined the term Left Behinds, wrote a book called The New Elite: The Death of Democracy that reverberates almost four decades later. People vote as much on cultural identity as issues, he argued. Incredibly, billionaire bad-boy Trump, purportedly waging class warfare and promising job restoration, convinced many blue-collar voters that Clinton and the Democrats were elitists who didn’t understand them.

Unions have trudged uphill battle because their leaders are often viewed as tough guys you wouldn’t want to cross. I convinced a Boston Globe reporter that he had erred in using the words “union bosses” to describe labor leaders elected by their rank and file. Management bosses answer to whom — the boards of directors who appointed them?

The themes most discussed in the current campaign have been covid-19, race and the economy. Here’s where unions become relevant to voters, whether they’re members or not. As go unions, so go workers. Virtually every study on the decline of workers cites the decline of unions as a major factor. That needs to be highlighted.

An 84-year-old Mainer told the Boston Globe’s Scot Lehigh why he was voting for Biden. “The Democrats helped the unions,” he said, “and got the wages up.” Bingo!

So there’s a great opportunity for the Democratic candidate. “Biden will have to stress his ties to labor unions,” Bret Stephens, a conservative columnist for the New York Times, writes. “It’s as much a part of his political brand as community activism was to Barack Obama’s.”

Jim Kaplan is an author, a bridge columnist and a contract adviser for the National Writers Union, United Auto Workers Local 1981. He can be reached at jkaplan105@gmail.com.