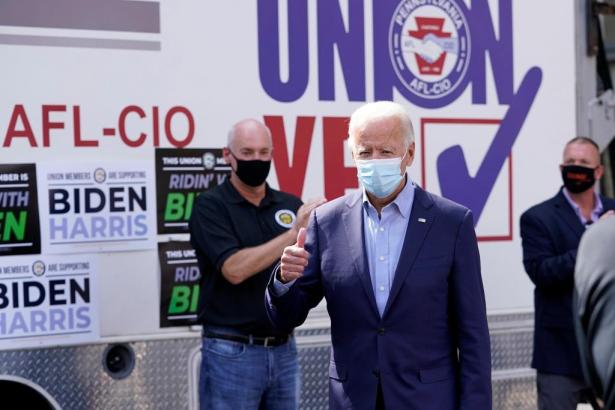 About 20 years ago, American unions realized they couldn’t do electoral politics as they had in the past—at least, not if they wanted their preferred candidates to win. The reason was simple: They no longer had enough members to swing elections as they once had.

Consider, for instance, the rate of unionization in the three states of the industrial Midwest that cost Hillary Clinton the White House in 2016. In the mid-20th century, just about half of the workers in Wisconsin, Michigan, and Pennsylvania were union members. In 2019, according to the most recent annual tally from the Bureau of Labor Statistics, only 8.1 percent of Wisconsin workers were union members, only 13.6 of Michigan’s, and only 12.0 percent of Pennsylvania’s. Clearly, if pro-labor candidates were to carry those states, the unions—more precisely, their political-action arms—would have to make their appeals to a broader audience than just their own members.

When John Sweeney became AFL-CIO president in 1995, labor’s political big sleep was ended. The Federation’s new political director, Steve Rosenthal, crafted a new program in which local union shop stewards began talking politics with their friends and fellow members at the worksites. And by 2003, labor, acknowledging its shrinkage, inaugurated a new program, Working America, which sought to reach out to working-class voters who weren’t union members, its organizers going door-to-door in their neighborhoods to talk about the issues—and eventually, the candidates—in upcoming elections.

This year, with more at stake for unions, and America, than in any election since, perhaps, 1860, the unions have upped their game, with two massive outreach programs to working-class voters in swing states. The first of these efforts—Union 2020—is the brainchild of Rosenthal, long retired from his post at the AFL-CIO but still among the most active and savvy of labor’s electoral strategists.

Rosenthal began by asking some of the nation’s largest unions to provide him with lists of their former members—which, for many unions, is a longer list than their current membership rolls. He then narrowed them down to former members in the crucial states of Wisconsin, Michigan, and Pennsylvania, and narrowed them further after targeting data enabled him to eliminate strong Democratic and Republican partisans. With funding from six major unions, he established Union 2020, a concerted outreach program to those still on the list. Further targeting enabled the program to identify other working-class residents of those three states who shared the generally pro-union perspectives of the former members already on the list. (The process was helped along by the stunning rise in unions’ approval ratings in recent years—to 65 percent in the most recent Gallup poll, the highest rating unions have seen in many decades. Rosenthal notes that when he started his AFL-CIO program in 1996, it was called “Labor ’96,” because the word “union” was then politically toxic to many; that today’s program is called “Union 2020” reflects the fact that it’s toxic no more.)

Since last spring, Union 2020 has established ongoing communications with 171,000 voters in Wisconsin, 266,000 in Michigan, and 588,000 in Pennsylvania. Given the demographics of those states, more than 90 percent of those voters were white. It more recently expanded the program to Minnesota, where it’s added a further 122,000 voters, and, with an unexpected donation from Michael Bloomberg, to 264,000 voters in Florida.

In pre-pandemic days, all these voters would have received periodic front-porch visits from canvassers. With the threat of COVID-19 stalking all too many front porches, the program has communicated with its voters through mail (both snail and e-) and social media. The mailings and messages have focused on issues like workplace and school safety in times of pandemic, the importance of workers’ say in designating a workplace to be safe, the contrasting positions of Joe Biden and Donald Trump on the pandemic, paid sick leave, the minimum wage, and so forth.

Last December, before the program began, polling by Lake Research Partners of workers representative of the targeted group showed they supported a generic Democrat (the primaries had yet to begin) over Trump by a 59 percent to 24 percent margin. By mid-September, after months of interactions with Union 2020, polling by Change Research showed that Biden was leading Trump among those voters by a 73 percent to 21 percent margin.

This year, the unions have upped their game, with two massive outreach programs to working-class voters in swing states.

Not until next week will Union 2020 likely begin phone contact with its members. With so many Americans working from home or in quasi-lockdown mode, more of them have been willing to engage with political phone canvassers than has been the case in recent elections. Rosenthal displays some wariness about phone contacts now: “People have been getting so many such calls they’re burning out,” he says. But in the absence of door-knocking, a phone call from a union activist may be the next best thing.

That’s certainly the belief at the AFL-CIO’s Working America program, whose long-established precinct walks in working-class neighborhoods have been supplanted this year by phone contacts. The program has been active in every swing state, beginning with an immense list of residents in working-class areas (it had 24 million names on it), narrowing it down through targeting to a manageable number, and then reaching out to those on the remaining list through all manner of mail and media—including phone calls. Like Union 2020, Working America winnowed its contacts to exclude strong partisans. Its contacts, says program director Matt Morrison, “don’t watch Fox News or CNN or MSNBC. They watch the local news.”

In a sample transcript of Working America phone calls that the program shared with the Prospect, one phone canvasser began by asking the recipient what he thought we should do to protect frontline workers like nurses and supermarket employees from the pandemic. When the recipient said he thought workers needed the right to protect themselves, possibly through unions, the canvasser engaged him in a talk about unions and worker rights, which led to their discussion of the choice on November’s ballot.

The talk didn’t have the intimacy of a front-porch colloquy; on the other hand, as anyone who’s gone precinct-walking and usually found nobody home can tell you, you can reach people telephonically much more quickly. “Normally,” says Morrison, “we would have 1,000 full-time door-knockers working now; instead, we have 180 phoners working seven days a week since Labor Day. They can reach seven to nine times [the number of] our members that our door-knockers could reach.”

Through the miracle of Alexander Graham Bell’s high-tech invention, and Working America’s own thematic appeals, the program has prodded roughly 500,000 voters, by Morrison’s estimate, to switch their voting preference from Trump, undecided, or not voting at all, to Biden. Its surveys show it’s been particularly effective in Michigan and Arizona.

If the numbers they’re seeing pan out on Election Day, both Morrison and Rosenthal want to roll their respective programs on so they influence legislative battles, elections, and even workplace struggles to come. Keeping the contacts going, Rosenthal says, “could build community support for organizing campaigns or strikes.” For his part, says Morrison, “it’s not enough to win the war—this election. We need to win the peace.”