After months of organizing that included the establishment of two protest encampments, Philadelphia’s unhoused people successfully pushed the city to agree to provide housing on a community land trust on October 14. 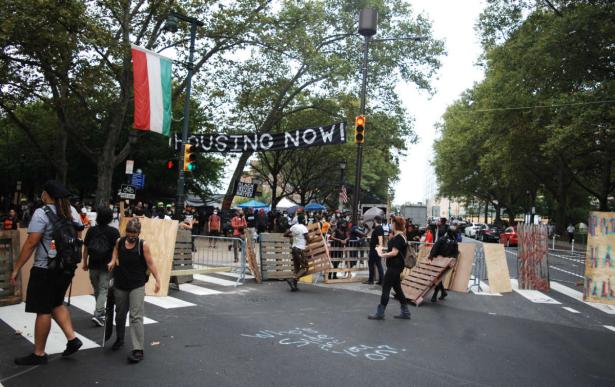 Camp James Talib-Dean residents and housing activists erect barricades at the main entrance to the encampment on the Benjamin Franklin Parkway in Philadelphia on September 9, 2020. ,Cory Clark/NurPhoto via Getty Images

Camp James Talib-Dean, or Camp JTD, closed last week, and organizers and encampment participants will eventually control a community land trust through a non-profit organization in coordination with the city. They will manage 50 properties provided by the city and PHA, and the city will build two tiny-house villages, which won’t be ready until mid-2021, according to the Inquirer.

“We know that it’s the start of really targeting what we see as [the Philadelphia Housing Authority (PHA)] allowing private developers to come in and target neighborhoods,” Sterling Johnson, an organizer with the Black and Brown Workers Collective, told Shadowproof.

Johnson’s cousin was James Talib-Dean, for whom the encampment was named, after the 34-year-old organizer died by overdose in June following the encampment’s launch.

“This is a real intervention that focuses on liberation and racial justice,” Johnson said.

Organizers recognize the deal does not go far enough to meet the needs of all people who are unhoused in Philadelphia, and they vow to continue the fight on the heels of these tremendous victories.

Since June of 2020, two homeless encampments with radical and anti-racist politics have sustained into the fall in Philadelphia. During the summer’s uprisings over the police killings of George Floyd, Breonna Taylor, and countless others, organizers nationwide sought to tie the fight for racial justice to the fight for housing justice.

Philadelphia Housing Action — an organizing coalition including the Black and Brown Workers Collective, Occupy PHA, Philly for REAL Justice, and others — announced a tentative commitment from the city on September 26, consisting of housing for 50 mothers and children from the encampments in 15 city-owned units, which would be placed in a community land trust.

Camp JTD was home to over a hundred people, successfully resisting multiple eviction attempts from the city and the constant threat of police. Wealthy local residents complained that “they no longer feel safe going to Whole Foods” to the media.

A sister encampment, Camp Teddy, launched shortly after Camp JTD outside the headquarters of the Philadelphia Housing Authority in North Philadelphia, on a plot of heavily contested land set to host the neighborhood’s only grocery store, in a food desert. These encampments were run and maintained by unhoused people, with the support of housed allies.

This effort is deeply personal to Johnson and their community and they hope to provide a space for those often left out of public housing provisions.

Johnson’s conviction, and the perseverance of the encampment, is already paying off, despite the significant opposition.

On October 6, Camp Teddy secured a win of their own after weeks of expecting police violence.

“[The city] told the media the eviction is ongoing, and they won’t tell the public when they’re coming, so we were kind of in this place for over a week where every day we were just waiting for the cops to come and crack our heads open, and clear the camps out,” said Jennifer Bennetch, founder of Occupy PHA, the day after the agreement.

On the evening of October 5, in a rush to preserve the $52 million business deal for the grocery store development (which also included mixed-income housing), the city and PHA stated that they were willing to work with Camp Teddy.

Throughout the spring, and during the encampments, Occupy PHA helped move unhoused people into 10 unoccupied PHA-owned properties and restored them to code.

“They did a masterful job, and we have to give them credit,” PHA president and CEO Kelvin Jeremiah told the Philadelphia Inquirer. “Remember, our ultimate goal was no different than theirs: promoting the urgency of getting affordable housing.”

Bennetch observed that the agreement allows for the Housing Authority to position themselves as heroes, as opposed to gatekeepers for existing housing options. Nonetheless, the residents of Camp Teddy are excited for the housing and possible job training.

These victories come during a year of coordinated rent strikes and other efforts to combat mass evictions, as 60 million people filed for unemployment within the last six months.

Protest encampments in Seattle and Minneapolis have produced mixed results; but there is hope the victories in Philadelphia may be instructive.

Philadelphia is a city struggling under the weight of the national housing crisis on top of all the other difficulties brought by neoliberal policies. It is the poorest big city in the country, which, due to the city’s intense gentrification, may only worsen.

The waiting list for public housing in Philadelphia has been closed for seven years, with 40,000 people on the list. Johnson pointed out that none of the housing given to encampment members was ever going to be considered for those on the waitlist.

“[This deal] is not enough housing to think of a permanent solution for everybody. We would like to get there, and we think that there’s enough housing in the city, and vacant housing, to reach those goals,” said Johnson. “We’re going to have to keep fighting for that.”

Organizers are hopeful that their recent successes are indicative of rising people power nationwide on issues of housing justice.

“I really want to connect with groups in other states and other cities where some of the same things are going on, and I want to get a coalition together and try to do a national push to stop housing authorities from selling land to developers,” said Bennetch, when looking to the future.

“[We could] try to get a federal policy where housing authorities will have to offer land that they’re going to get rid of to community groups to stay low income housing, stay looking the way it looks, and preserve the culture and affordability of the neighborhood.”

Shadowproof is a financially independent news organization. All of our funding comes from small donations made by readers like you. We use your donations to hire freelance writers and cover our operating costs. Monthly membership subscriptions give us the stability we need to make plans while ensuring our organization does not depend on grants or major funders. If you like what you read, support our writers with a donation today.   Donate

Lexi McMenamin is a reporter from Philadelphia who writes about politics, identity and activist movements.