Enthusiasm for strikes, walkouts, sick-outs, and pickets has surged. A new, progressive wing of the Democratic Party, represented by young women of color like Alexandria Ocasio-Cortez and Ilhan Omar—has won the enthusiasm of millions of young people. 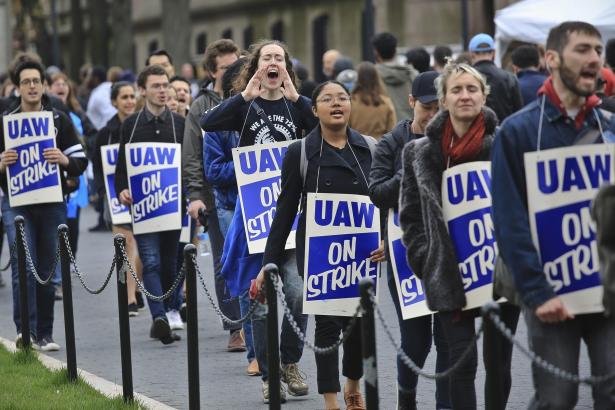 This article is part of the Review’s series on the 2020 US elections.

On a blustery October afternoon, Joe Biden stopped in Erie, Pennsylvania, a lakeside city in a battleground county that swung to Trump in 2016, to speak to an attentive group of plumbers at a union hall. “If every investment banker in New York went on strike, nothing would change much in America,” Biden said, addressing members of United Association Local 27, who stood by their workbenches in blue shirts and face masks. “If every plumber decided to stop working, every electrician—the country comes to a halt. I mean, literally, not figuratively. Literally, it comes to a damn halt.”

A video of Biden’s comment went viral, circulated by members of the country’s resurgent labor movement, by and large a young, multiracial coalition of social media–savvy leftists—a demographic that perhaps only shares common class interests with white, middle-aged plumbers in Erie. Many of these young labor enthusiasts had been supporters of Bernie Sanders for whom Biden was not a second or even a third choice in the primaries, and who nevertheless responded to Biden’s comment with support—and calls for a general strike.

During the 2008 recession, popular support for labor unions, according to Gallup, hit an all-time low. (Historically, American opinion on unions has suffered during economic crises.) But in the last four years, enthusiasm for strikes, walkouts, sick-outs, and pickets has surged, often in unusual places. In 2018, West Virginia public school teachers, demanding higher wages and smaller classroom sizes, staged a wildcat strike that spread to a series of red states: Oklahoma, Arizona, Kentucky, and North Carolina. Amazon warehouse workers, Google and Microsoft engineers, and journalists at digital media companies have ignited their own combative movements, gaining widespread support on social media. Earlier this year, when UC Santa Cruz graduate students staged a wildcat strike for a $1,412 increase to their monthly stipend, their strike fund received nearly $300,000 on GoFundMe and support from Bernie Sanders on Twitter. Protests, organized on Twitter and Facebook, spread to nearly every single University of California campus in the state.

The new gig economy, which emerged out of Silicon Valley in the aftermath of the 2008 recession, has been a major site of labor organizing in recent years. Start-up platforms like Uber, Lyft, Instacart, Postmates, DoorDash, and Caviar—all founded in the span of four years, between 2009 and 2013— enticed millions of underemployed Americans into rideshare and food delivery jobs. These gig workers are not paid per hour, but per ride, delivery order, or task—in a poverty wage “piecework” labor model resembling the garment industry at the turn of the twentieth century, when Jewish and Italian seamstresses living in overcrowded New York City tenements were paid per piece of needlework, with no standardized minimum wage. Since 2018, thousands of gig workers have mobilized from coast to coast, staging massive multicity strikes and rallies at airports, corporate office towers, and the homes of billionaire investors. “All of the money I make goes to bills and car maintenance and gas,” an Uber driver in Orange County, California, who participated in a strike last year the day before Uber’s stock market debut, told me bitterly. “I did a ride yesterday where the rider paid $8.60, and my pay was $2.56. When you’re the driver and you see that, it makes your blood boil.”

Meanwhile, a new, progressive wing of the Democratic Party, represented by young women of color like Alexandria Ocasio-Cortez and Ilhan Omar—whose campaigns have spotlighted the labor issues affecting their working-class constituents—has won the enthusiasm of millions of young people on Twitter, Instagram, and most recently, the livestreaming service for gamers, Twitch. Support for unions among the American public, according to Gallup, is rising again to nearly the highest it has been since the 1960s.

This article is part of the Review’s series on the 2020 US elections.